Day 1 Start a trip in rain and get it out of the way.

After a quick handover at Nelson airport, Big Blue, in brilliant fine weather, made its way to Nelson Lakes to pick up Sue Webb (joining us yet again for a Xmas trip). Then it was a spectacular drive up the Wairau Valley on the Rainbow road east of Lake Rotoiti, Nelson Lakes, through fords, over narrow bridges and edging around bluffs - all of which was no challenge for our driver Keith Ayton.
Late in the afternoon we eventually arrived at Lake Tennyson, our starting point for the trip. It lived up to its reputation as a cold and miserable place. A cold wind was blowing and misty rain can across the lake to where we slept in the bus for the night.

Day 2 An easy walk up an open valley.

The morning mist cleared as we walked up the west side of Lake Tennyson to pick up the Clarence River. As we progressed up the open river valley good views were had of snow on the tops. After an easy four-hours walk we finally found a wide fan for camping by the ravine that marks the way up to the Paske Saddle. It had to be a large area as we were two parties at this stage, with Keith Ayton's party planning to head up over to the Paske the next day.

Day 3 A rough pass at the head of the Clarence and a slog down to the East Sabine.

The brilliant moon landscape was compensation for the cold, frosty night. After farewelling Keith's party we went up the true left of the Clarence for about an hour. It was a tumbling mountain stream by this time so was easily crossed to access a long grassy slope that took us up to a plateau at the foot of a large boulder-strewn alpine basin with Belvedere Peak at its head. From there it was a scramble up over steep, rough rocks to get to the bottom of loose scree which we slowly inched up to reach the Clarence Pass, just west of Belvedere Peak. 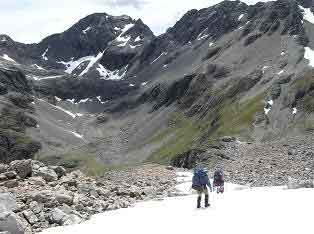 Passes are for frolicking and photographing heroic poses, so after doing it justice we dropped out of the wind to a glorious lunch spot. The Upper East Sabine Valley curled left then right and we looked across to Mt McKay with a tarn nestled neatly below it. Our anticipated campsite for the night looked very distant so it was time to descend, aided by a long tongue of snow. Steep bluffs ahead necessitated a sidle to the right to the head of the East Sabine basin before we were able to follow the true left of the East Sabine through snow grass cleverly disguising the spears of wild spaniard - a plant best appreciated from a distance. The alpine tussock was slow going so it wasn't until late in the afternoon after an eight-hour-plus day that we found any place to camp. Even then it was a somewhat less-than-ideal hummocky grass flat.

Day 4 A day we all want to forget - not so much very hard as a long, slow, scrappy day.

The East Sabine deserved its reputation as a tough section. It looked OK on the map but it was slow progress through untracked scrub, wind- or snow-bent young beech and dense bush, with the rough river often being the best option. Finally, later in the day, one or two grassy flats were reached before the Sabine/Travers Saddle track was intersected. A spectacular thundering gorge revived our spirits but a ridge had to be crossed before the descent down to the Sabine River and a most welcome West Sabine Hut. Occupants of the crowded hut took one look at us and kindly made room. Perhaps it was the obviously-damaged bodies that worked in our favour. Soup, sched, tea, bed. 10½-hour day.

Day 5 Bodies are tired so the day is shortened.

A sleep-in was possible but habit got us underway at the usual 8.00am. This time we had a lovely well-defined track up to Blue Lake Hut. Do we want to carry on to the head of Lake Constance under Waiau Pass to camp? No one thought so.
A well-earned afternoon's rest in perfect weather in a perfect location.

Day 6 A fine day, a great pass, and an awesome campsite.

What a way to celebrate a 43rd wedding anniversary (Noel and Chris)! Good company and a reviving sleep. 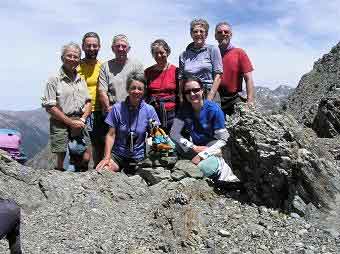 As the early morning mist lifted, we made our way up past Lake Constance via a very unfair climb and descent to the head of the lake. We were all going so well that there was no question about not continuing up over Waiau Pass. After a trudge up the lower, steep access ridge toward the pass we split into two groups, one half-shakily traversing an unstable shingle slip (following the poles) and the other taking a gamble on a higher rocky tongue. Luckily, we all met up at a snow patch under the pass for lunch. What is this? Figures on the pass but one seems very small. The North family joined us: Chris and Emily with 10-month-old Hannah and 3-year-old Ngaire and the largest, heaviest pack you could believe, necessary for the journey from Lewis Pass Rd to Nelson Lakes - an epic adventure. We were impressed but they were also impressed with our oldest 71-year-old member (yay Dougal!). 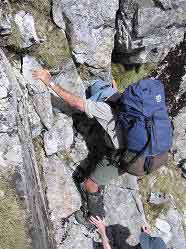 The final climb to the pass for the obligatory photo and then a slow, steep 300m climb down to a perfect alpine campsite. Babbling brook, view across to Lake Thompson and Thompson Pass and Mike sacrificing his gingernut dessert to give us all a sherry toast for the not-so-newly weds.

Day 7 A long valley and a very hot day.

The circle continued with a push through the scrub on the true left of the right branch of the Upper Waiau to reach the Waiau Forks. Flattened trees seem to have covered the only camping spot here so we were thankful we had stopped where we did the night before. Four hours from camp we broke out into river flats and found the Caroline Biv. A hot, dry nor-wester made it a long day to reach a camping spot in the shade below the gentle Maling Pass.

Day 8 A gentle stroll over a pass to the bus.

To complete the trip there was an early morning trudge along the 4-wheel-drive track that leads over Maling Pass to Lake Tennyson. With stormy-looking clouds coming down the Clarence Valley we quickly headed cross-country to race to the shelter of Big Blue.
Leaving the rain behind we drove along the Rainbow Rd, passing the Molesworth Rd and Amuri ski field to Hanmer Springs.