A Lightweight Easter in the Raglan Range with Rob

The Raglan Range is in southern Marlborough. It’s wonderful tramping country and one of the best-kept secrets of the northern South Island tramping circuit.
This was my first time into this area. I had read that it was very steep and wild - it was! My companion for this trip was Ken Lathrope, my business partner from Seattle, Washington. Ken had "hiked" much of the Northern Cascades and was keen to experience New Zealand tramping.

We flew into Nelson on Saturday morning to be picked up by my sister and driven to the Nelson Lakes area and up the Wairau Valley. Things turned to custard early when, halfway along the hydro road, we arrived at a locked gate - this was not mentioned in Sven Braebyn's book! So right from the start we were behind the eight ball as we had to do a one-and-a-half hour road bash before crossing the Wairau and beginning the tramp.

We arrived at the swing bridge at 12.15pm, hanging a left to backtrack on the other side of the river down to Hell Fire Creek. We were immediately bush-bashing. Poor Ken thought this was going to be like the Pacific Crest Trail - "Where’s the track?" he enquired. I said, "There isn't one today, half of one tomorrow, none on day three, but you’re in luck on day four!"

Once hitting Hell Fire Creek we climbed steadily, heading for the top tarn. Owing to our late start we were never going to make the top tarn before dark, a blow, because it is a great campsite. Besides, Ken threw in the towel at 4pm and we set up camp in a lovely small clearing near the creek. The forecast was for rain today, with clearing conditions. We had overcast, showery conditions all day and a bout of heavy rain during the night. The following days were picture perfect - blue skies, sunny conditions - unbelievable Easter weather! This all boded well for our two high pass crossings.

We broke camp at 8.30am and arrived at the top tarn at 11.30am. Then it was a short hop to the col arriving at 12.30pm. From here it was a down-hill valley bash to Top Misery Hut, arriving at 4pm. A tip for others doing this trip: sidle high until above Misery Creek then drop down. We dropped straight off the ridge and had a tough time in heavy tussock and bogs in the lower valley. Once you get to the bush-line the going is pretty easy as the bush is very open - stick to the left bank.
Top Misery Hut is your typical Forest Service 6-bunker. What a fabulous location sitting in a large open valley-flat surrounded by towering peaks, a common feature of the Raglan. We were so pleased to arrive, stoke up the fire, fill up the belly and hit the pit. 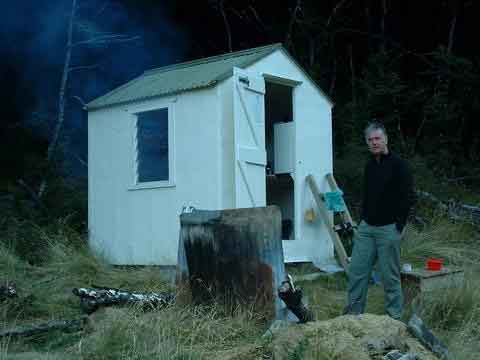 We left Top Misery at 8.45am travelling down-river to Bottom Misery Hut arriving at 10.55am. This was a marked track and quick going. Bottom Misery was also a lovely, cosy hut perched on a shelf overlooking the Branch River. With wonderful views, it would be a nice place to stay, but we were heading for the Upper Branch Biv for the night. After a break we left at noon, heading up-river to Branch Biv.
There were some track markers to start with but these disappeared after a short time. Thanks to the GPS we arrived at Branch Biv at 2.15pm. This biv has two bunks, a ‘dog box’, but is really clean and cosy.
There was a great fire-pit outside with dug-in seating outside. We got a great fire going and it was really homely. Wasps were a problem. This area feels so remote. We loved our night here.

We awoke to sunny weather, a great relief as we had a big pass to go over today to drop into the Lees Valley. We left at 8am. No tracks today. The guidebooks advised climbing high in the bush at the start to avoid a gorge, then dropping back down to the river. 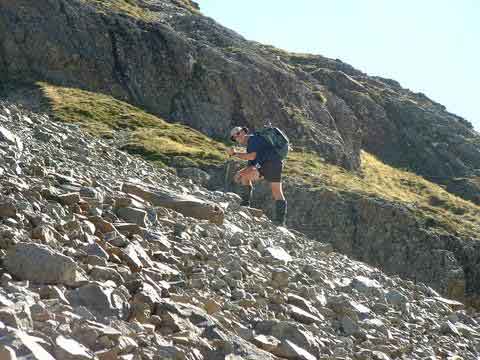 We travelled up-river for about two-and-a-half hours until adjacent to a big scree slope. Now the slog began. A 600-metre climb up the scree, then a sidle across a tussock bench and up another boulder field to a slot in the ridgeline. We got there at 12.15. What a view!

This country is so rugged and steep. The opposing peaks seem to rise almost vertically from the valley floor. It was very windy on top and we slipped into our wind-jackets for the drop into the Lees Valley. And what a drop it was! After a steep boulder incline we hit a fabulous scree slope that we literally surfed down - so exhilarating!
On reaching Lees Creek we followed the right bank - some bush bashing then some fabulous river-flats and a very interesting boulder section. Huge boulders that were so “prehistoric”. We finally hit the hut clearing at 4.15. There was a father and son team in the hut, having just arrived for a hunting trip from the road end - our destination the next day. These were the only people we saw on our trip.
As were meeting my sister at 9.30 in the morning at the hydro road, we had to leave Lees Hut at 6.30am. You guessed it - after an 8-hour plus day yesterday, we slept in. We hit the track at 7.30am. This was the fastest tramp I've done in a long time, getting out to the road and down to the locked gate in 2 hours 30, one hour ahead of the published time! Then it was back to Nelson in time to catch the early afternoon flight to Auckland.

Most club members know me as a lightweight tramper, so I thought my 8kg four-day gear list may be of interest to members. I’ve included brands so you can research these on the web for yourself. Feel free to call me to discuss.

Comments:
I am changing my Leki pole to Life-Link Ultra lite, 100 grams lighter.
In summer I take my Oware Tarp and Biv Bag (590 grams), plus my Western Mountaineering HighLite sleeping bag (450 grams).
This knocks off over 250 grams from my total weight.