On December 27th, the Mt Owen group met up at Nelson airport. The weather forecast was promising and we expected to have little/no rain for the next few days. We were picked up by Trek Express at 9am to Courthouse Flat . Fortunately for the dry weather, the van and trailer crossed Dart Ford easily. However, our driver had to perform some tricky manoeuvres when we met a couple of on-coming vehicles as the unsealed road was very narrow. 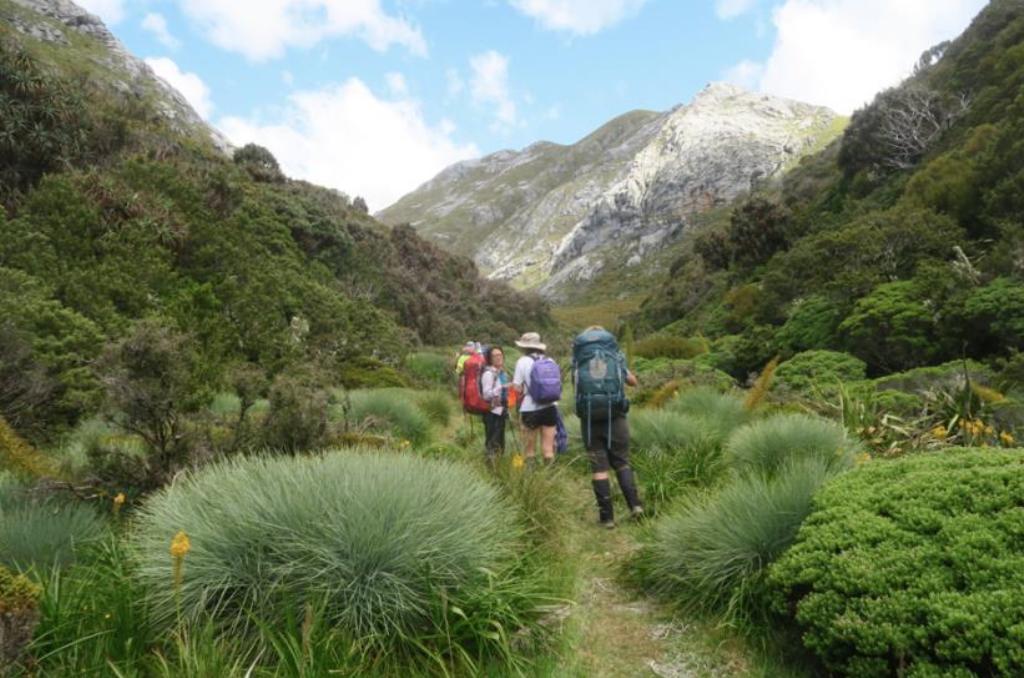 We had a choice of 2 tracks to get to Granity Pass Hut, via the ridge or the more shady forest track. The group chose to take the ridge way with hopes of views and also getting the climb out of the way earlier in the tramp. Little did we know it was a 900m uphill slog with little views. To be fair, we saw glimpses of Mt Patriarch and other mountain ranges towards the top.

There was a lovely grassy clearing just before the Staircase which was later to become our campsite on Day 4.

Going down the Staircase led to much welcome shade from the lovely beech trees. We emerged from the forest to boulder hop on a dry creek bed which eventually turned into a lovely garden walk.

It wasn’t long before we dropped down to Granity Pass Hut. It was located in the valley dwarfed by imposing rock cliffs on either side. I also discovered to my delight orchids growing underneath the scrubby bushes. There were only 3 bunks left in the 12 bunk hut when we arrived, so the majority of us tented on what little clearing there was around the hut. The hut had a resident weka who was not shy to stick its beak into and around our tents and belongings.

As the weather was looking good, we decided to carry on to camp at the tarns near Mount Owen for Day 2. The big climb from Courthouse Flat had taken its toll on Dave, who elected to stay put at Granity Hut and used that as his base to explore the area.

On Day 2, we packed up and walked in search of a nice camp spot near the tarns. All good intentions aside, when we got to Sanctuary Basin (only ~1h from the hut), we spied a lonesome tent in the near distance. Upon closer investigation, we discovered lovely flat grassy ground and a running stream nearby. We also reasoned this spot was closer to Culliford Hill should we decide to exit via Nuggety Gorge Creek, and that it would most likely be boggy around the tarns. These were good enough reasons to convince us to set up camp here, although we were considerate enough to set our village away from the tent that was already there. We then carried day packs and proceeded to climb Mount Owen (1875m) leisurely. It was a really fun day with lots of photo opportunities and rock scrambling on cool rock formations. We had spectacular 360 degree views of the mountain ranges at the top. Unfortunately, Andrew’s knee was next to go.

We decided to stay another night at Sanctuary Basin which would allow him to have a rest day while we explored Culliford Hill on Day 3. 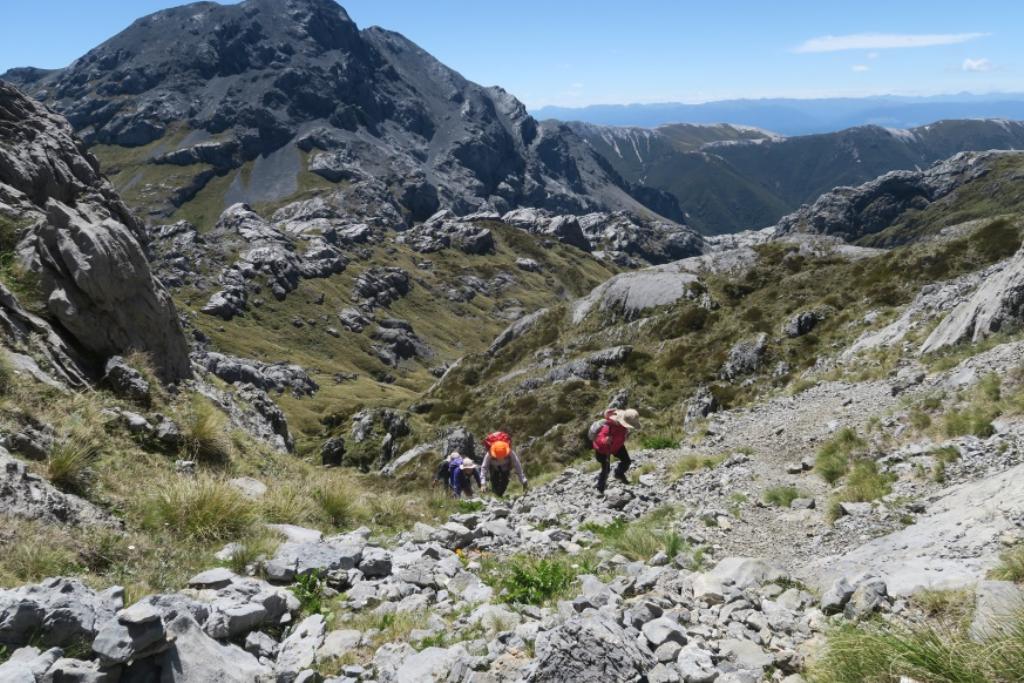 On Day 3, we left Andrew to guard our tents and be entertained by rock climbers opposite our camp site whilst we went exploring up Culliford Hill. Thanks to Michelle’s good navigational skills, we picked and scrub bashed our way to Culliford Hill and then came back via a tarn in a valley nearby our campsite. We spent another pleasant evening at Sanctuary Basin.

The plan for Day 4 was to explore Billie’s Knob and then walk partway out and camp on the grassy area past the Staircase. We set off with day packs on the Lookout Range track for the first part of the way. There were no tracks up to Billie’s Knob, and although we found a few cairns, the way up was steep and precarious. Fortunately, Michelle was able to find a scrubby, non-rocky way down, but not before we were jabbed by the Spaniard plants most of the way down, which made for a relatively fast descent.

We walked out to Courthouse Flat via the more shady forest way, which began with a big steep downhill. This track led us past some historic remains of the gold prospecting that was in the area and past the Lutine pools, where some of us went for a wash. Others went for a walk to the Granity Gorge, and were rewarded by a close encounter with a whio.

We spent New Years Eve at St Arnaud, and managed to get a table for us (we were joined by Marilyn and her niece) at the Alpine Lodge for drinks and a lovely dinner.

Mount Owen was a most enjoyable trip with good company and great weather. Our boots remained dry for the whole 5 days!

Thank you Tony, for doing the detailed trip planning and bookings.