Following a successful trip in the Mt Owen area and the departure of three ATCers, we were joined by some fresh faces at St Arnaud and our team became 8. A sumptuous barbecue feast at the Alpine Lodge the night before and the discovery of good coffee had us all revived and rearing to go. The day turned on yet another pearler for our rendezvous with Rotoiti Water Taxis - a great way to start off the New Year. An early morning departure saw us skimming across the lake in near perfect conditions to Coldwater Hut. We even had a little scenic tour on the way and some lakeside rata were putting on a nice red welcoming flourish.

On arrival at the hut (a known sandfly hotspot), there was no mucking around. It was packs on and out of there before the sandflies even got a whiff of us. There began a very pleasant stroll up the Travers Valley passing in and out of beech forest and grassy flats with the ever present aroma of beech nectar and the hum of wasps which thankfully kept their distance. Negotiating a stream-side slip, a loud snapping sound emanated from the direction of Dave but thankfully turned out to be one of his trekking poles breaking and not a limb.

An hour or two ticked by before we reached the track junction to Hopeless Hut and commenced a gentle ascent to reach the hut at 1030m (which is not visible until you just about walk through the front door). The hut is tucked into the edge of the forest above a bouldery bubbling stream with perfect wash pools. The valley walls are quite steep at this point and it’s a very pleasant spot to sit and contemplate this spectacularly beautiful corner of the globe and views down the valley. The steepness of the valley walls pose significant avalanche risk in snow conditions and a sign at the Hopeless creek track junction in the Travers Valley indicates whether the track is closed due to high risk. The hut was already inhabited by a friendly Nelson couple who informed us that bad weather might be on the way, confirming what we already knew. Another guy who arrived not long before us, scarpered pretty well immediately when we piled into the hut and didn’t reappear until much later.

The lack of decent campsites around the hut and the ominous forecast had most of us scheming up ways we could squeeze into the 6 bunk space. Sleeping in a tent was still very much a novelty to Tong and Eng who chose to rough it outside. If you ever feel the need to visit a hut where you can snuggle up with someone, then Hopeless Hut may just be the place for you. There are two double mattress bunks! While we were all on pretty good terms by that stage, no-one chose to opt for the snuggle up option and it was with great delight that a very comfortable and clean basement apartment was discovered via a secret passage in the woodshed with plenty of room to spread out, freeing up the upstairs space.

The next morning, the valley was wet and completely clagged in, so we decided to abort plans to tackle the saddle and fill in an extra day around the hut. This set the tone for the relaxed style tramping that had already begun on the previous trip. Dave made the difficult decision to bail back out with the Nelson couple and Catherine accompanied them down valley for a few hours. Back in the hut, the hut book was read and re-read and norovirus notices were contemplated. Christine offered to Morris dance but was sidetracked into penning the following rhyme with Michelle

One wet day at Hopeless Hut
Sat a team of seven with the door closed shut
The clouds were low but the spirits were high
Perhaps some blue would appear in the sky
The bog smelt sweet and the birds did tweet
Oh what a shame about the smell of our feet
On the rusty tin roof did the rain percussion
Meanwhile inside was earnest discussion
Of adventures past and those to come
With that inspiration we were far from glum.

The day passed by quite comfortably. A few of us headed up valley to build a rock bridge across a stream. We were joined at the hut in the evening by two young German men carrying enormous packs with jars of jam and loaves of bread. It was a pleasure to stay in a hut where the loo has been disinfected and fragranced with sweet pink floral bouquet sanitiser. The first, and quite possibly the last such experience. 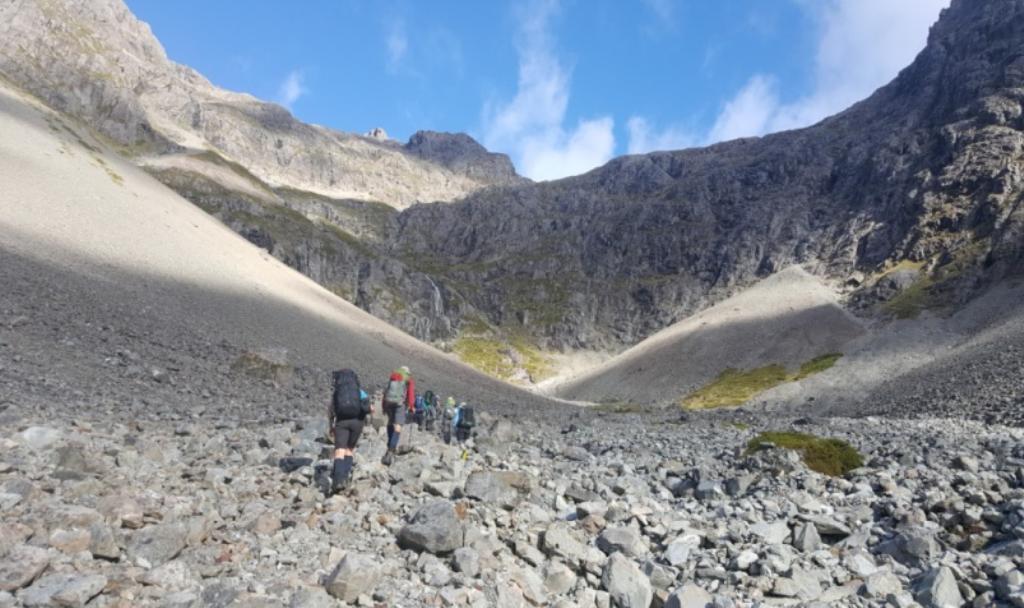 Cirque at the head of the Hopeless Creek valley

Our decision to delay our saddle traverse turned out to be a good one because day three dawned clear and promising. The track heads up valley from the hut terminating in a large imposing cirque. There are two possible options for conquering the cirque walls. Either climb directly up, to the true left of the waterfall, or scramble up the large scree fan on the west side of the cirque, staying closer to the northern side of the fan. The latter option is the more recognised route and the direction we took. The slope is loose and scrambly. Once you connect with the head wall, a cairned route can be picked up to take you higher. From here to the saddle is almost entirely rock travel. This part of the route could be more difficult to follow in bad weather.

Two high tarns in rocky basins are eventually reached and the cairned route (passing between the tarns) is more easily followed from here to the top of the saddle. If you don’t like boulder hopping then this is not the trip for you. There were a few tiny patches of snow to traverse which could be easily avoided. We reached Sunset Saddle (1900m) bang on mid day and were greeted with expansive views in all directions. Lake Angelus Hut could be seen in the distance. The saddle would be a fantastic spot to be sitting at sunset.

The team on Sunset Saddle

Two very lean and nimbly footed Czechs with tiny daypacks passed us on the saddle heading in the opposite direction with the intention of completing our entire 5 day circuit in one day. They were well on target. Eng, Tong, Andrew, Uta and Christine followed a cairned crumbly route 150m or so to the top of Angelus Peak (2075m) from the saddle, and enjoyed the views while Catherine and Michelle chilled out.

Descending from the saddle was no great drama and well cairned. We passed a high alpine tarn on the way down to the larger Hinepouri Tarn and decided it was a very appealing place to stop and set up camp for the night having ample flattish areas for our six tents. Another lazy afternoon followed with some very broody clouds passing by, accompanied by loud claps of thunder. Retreating to our tents there was very little rain and about five minutes of hail. Show over. Celmisias, ranunculas, gentians and other alpine flowers were in full bloom adding to the delightful scene around our campsite.

By now, we were aware of a serious weather bomb on the way, so we didn’t muck around the next morning despite the clear skies, with the hope of reaching the safety of Bushline Hut above St Arnaud before things got too crazy. Hinepouri tarn can be skirted either to the east or west with cairned routes both ways. We chose the eastern option which took us around the northern end of the tarn which has the best camping site on the tarn. We made a brief stop at Angelus hut before gaining the ridge and heading north east. The Robert Ridge is a well worn thoroughfare with a steady stream of traffic and fantastic views along the way. Beyond the now defunct Mt Robert ski field we diverted east and arrived at Bushline hut (14 bunks, platforms) with enough time to hang tents out to dry. Tucked into the edge of the bushline (a well named hut), St Arnaud can be viewed, almost close enough to smell the coffee. A steady stream of day walkers filed past the hut but did not join us, so we had the hut to ourselves for the night. While the North Island received a battering, we had unspectacular mild showery rain.

Dropping down Paddys track the next morning, it didn’t take long to connect with the lakeside track then road and track back to St Arnaud village. We were a merry band of happy and frequently singing trampers who enjoyed a most memorable trip with plenty of time for botanising, photographising and admiring this absolute gem of a trampers playground.