Diary of a Reluctant Tramper

As Margaret reasonably pointed out to me, I had signed up to this trip.

The only trouble was, as usual, I hadn’t looked at what was involved.

Obviously everyone else had, as there were just the 2 of us for Trip 1. I had sort of got away with it over the last 10 years, but another birthday, and not really tramping for 2 years, was becoming an issue.

Trip 1 had begun at 3 pm with a 5 hour ascent up a switchback, through open stunted shrub land on an old pack track to Riordan’s Hut at the start of the Anatoki Circuit or the" Kill Devil Track", on the Eastern end of the Lockett Range in Kahurangi. My body was in shock by the time we got to this historic hut, built as a shelter for musterers last century, made the acquaintance of Frank and Rose, who were already installed, put up our tents, and collapsed.

In the morning the 20 mins back to the main track seemed a lot shorter than the previous night and we started a long slow descent, again on a pack track, to Waingaro Hut, built in the 1930s by goldminers. It is wonderful that these huts are being looked after by private individuals and restored to their former quirkiness.

Lunch dealt to, we continued to Lake Stanley, with its stark, protruding, dead trees, created by a large slip during the Murchison earthquake in 1929. Along the way I was thrilled to see a pair of whio, but this was soon eclipsed by Margaret spotting a family of thar in the riverbed, who were not at all concerned by us. 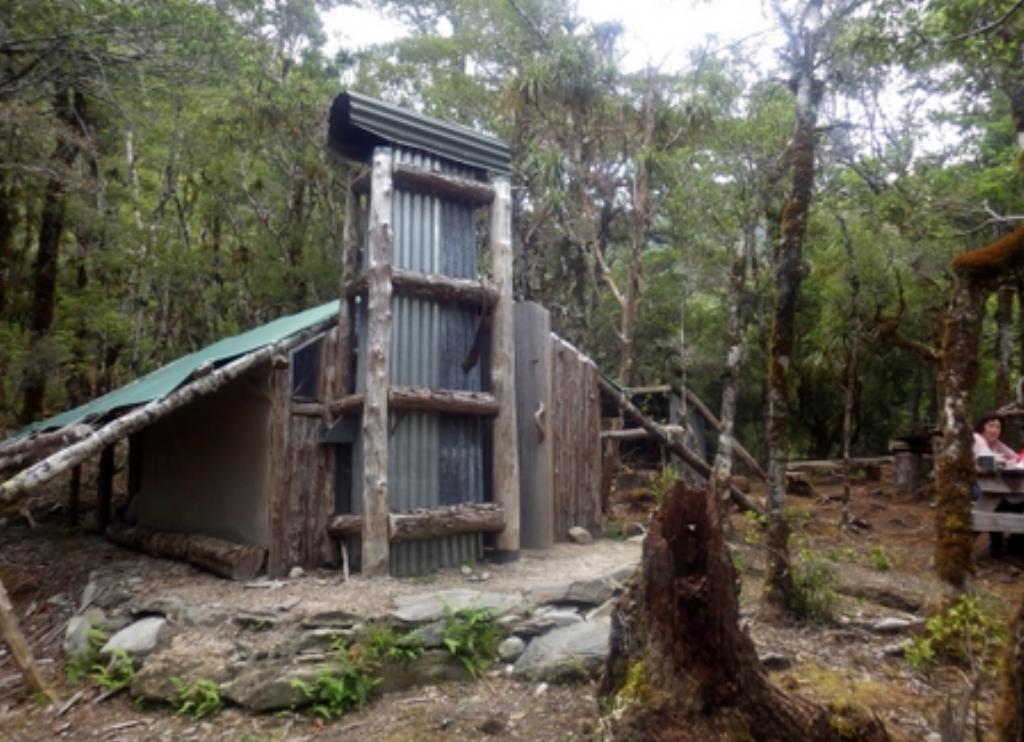 After 7 + hours we arrived at the Soper Shelter, opened in 2016, built to the same specifications as those for the Government Deer Cullers in the Great Depression. It was named for Frank Soper and his wife Bernie. Frank was a "packer" who with his 4 horses, brought supplies in for the miners in all weathers and made horseshoes with a spike on the front, for icy conditions. It was very comfortable, and beautifully situated, in a sun lit clearing close to the lake, and we were very happy to be there.

Next day we walked on to Anatoki Forks. The hut is distinguished by a hot shower heated by the wet-back and we met the Stones, a local farming family of 7.

Margaret was keen to climb over Yuletide Peak the next day and camp at Adelaide Tarn. Fortunately this was precluded by the forecast, rain was threatening, and the Stones advised us not to make the trip out to the road end if it had been raining, as there were 30 stream crossings, some necessitating a scramble in and out of wet, slippery, rocky gullies.

Margaret "compromised" by making the trip towards Yuletide Peak a day expedition, a 3 kilometre vertical scramble up, followed by the reverse on our return! On the plus side the mountain neinei was beautiful, a coppery gold carpet, the Powelliphanta ( giant carnivorous snails) amazing, and the large numbers of birds, including tuis, robins, bellbirds, piwakawaka, riflemen, and even a kakariki, a joy and, I am sure, a testament to the success of 1080,and a win in ‘the battle for the birds".

After our "rest" day we had to walk out. It was 20 kilometres including 2 kilometres through farmland, and a 3 kilometre road bash which I did in jandals, not helped by the 8+ wasp stings that I acquired, in addition to a couple from the previous days. Luckily we got hold of our shuttle driver,2 days early, and were soon in Paradise (AKA "The Barefoot Backpackers") in Takaka where we were invited to a shared meal, followed by 2 days R&R including cycling to Pupu Springs and to Pohara.

Against my better judgement, but slightly mollified by the Takaka experience, Margaret and I were dropped into the Cobb Valley and met up with Terri- Ann who was joining us to do the Lockett Range. According to Margaret, everything is either dead flat, a ramp or a standard tramping track. The walk up to Sylvester Hut was admittedly fairly easy and once there we walked to Lake Sylvester and on to Iron Lake. Margaret and Terri-Ann then went on to Lake Lillie, before joining the old track to Diamond Lake and returning to the hut in the rain, the trip over the Lockett Range having been abandoned because of the rain. For me, aside from the reprieve, the high point was seeing a Kea on the porch, as large as life and quite at ease. 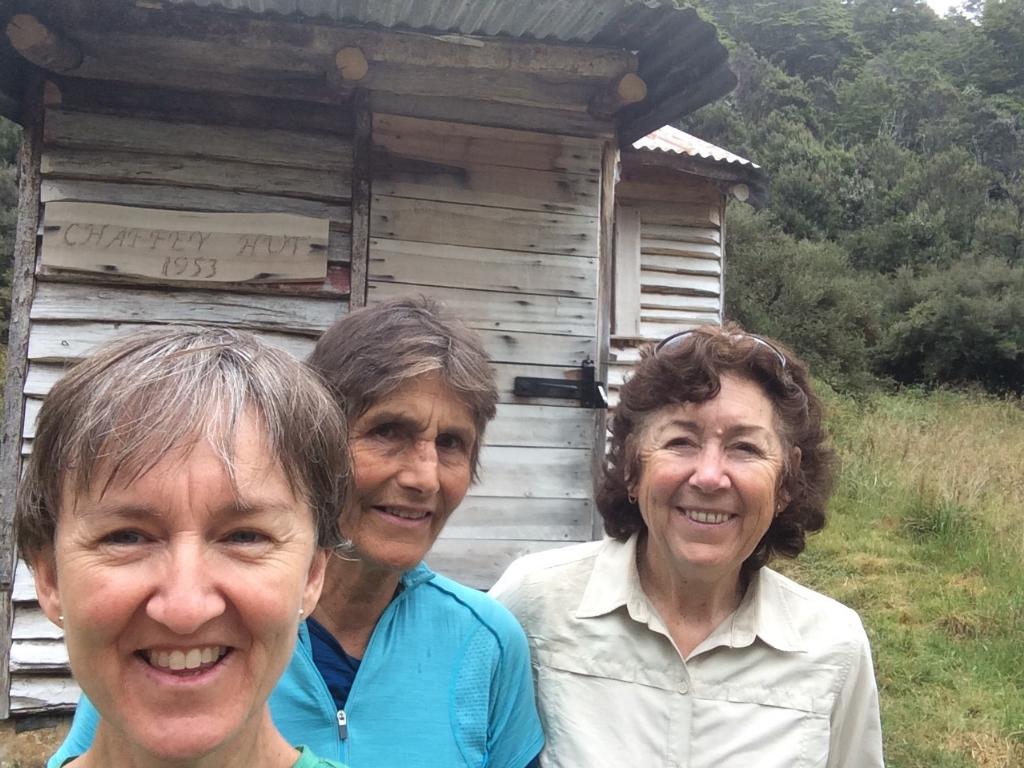 Next day we made our way back down to Terri- Ann’s rental and drove to Trilobite Hut and then walked up the Cobb Valley to Fenella Hut, via Chaffey’s Hut, another cute do-up and the Tent Camp at the end of the valley. At Cobb Hut we left the packs and had a look at Cobb Lake, after which I left the other 2 to explore Round Lake and went on to Fenella.

We shared the hut with a friendly group from Methven Tramping Club and had a sleep in because of the rain but by 11.30 were walking back down the valley to Trilobite, where we left Terri-Ann and walked up to Mytton’s Hut for the night, also being maintained privately, for the use of all. 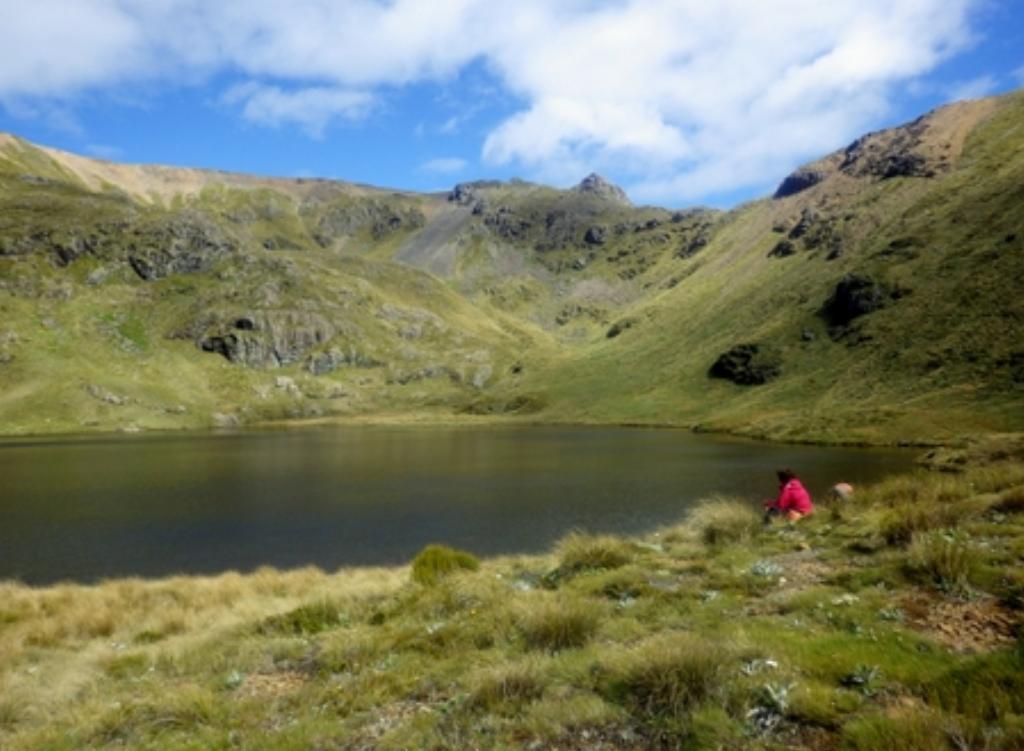 Up onto the Tops from Mytton’s via Lake Peel to Balloon Hut for lunch. It was a beautiful day to be on the Table-lands We bunked down at Salisbury Lodge after an afternoon walk around various sinkholes and the Sphinx stream. We received cherries for breakfast after offering a fellow tramper a tea bag and also encountered the warden Jo, who was a lovely cheerful, positive woman.

It was however to be a long day. Up and over Gordon’s Pyramid, via a Goblin Forest ,in the mist and wind and on up and through the Horseshoe Basin with its amazing Kaarst forms onto to the Arthur Ridge, then sidling around Winter Peak, only 40 metres lower than Mt Arthur. 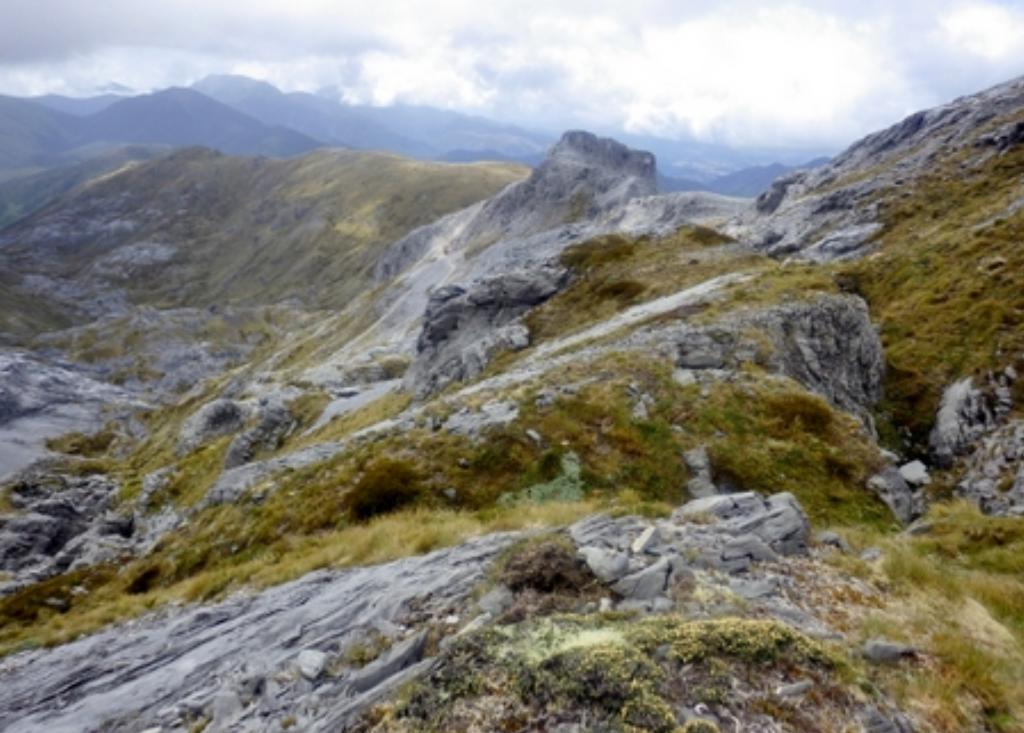 Finally, a steep descent down into the Ellis Basin and on to Ellis Hut. I had to keep reminding myself all day that it was a standard track, and if not that ,then dead flat, or a ramp!

Next day we had to negotiate, what was described in Margaret’s Guide to NW Nelson as "a horrendous tramping track" out to the Baton Valley Road end. When I queried the description she said it was an old book!

We spent the day climbing up and down around rocky bluffs and doing river crossings and pulling our packs up the cliff tied to spare boot laces. I think "horrendous" was pretty accurate! That night we stayed at Hickey’s Clearing as I had decided to start looking at the map and these things called contours!

Margaret was keen to walk out on a 20 kilometre deserted road in the hope of hitch-hiking to Motueka. I wasn’t , so instead we spent the next day exploring the start of the Baton Track, reading about the history, discovering a working gold dredge and even a couple of disreputable fellow trampers, Garry and Robin, camped at the end of Cowan Spur.

They were great trips, we explored lots of new country ,and I survived, but I do suggest that when contemplating Christmas Trips look at where you are going and make some effort to get fit.

Thanks for the fun and the leadership Margaret, and thanks Terri-Ann for your company too - Kay Willcocks.