He’d first spied us as we crested pt 1442 on the Matiri Range. And from afar he’d noted our progress to the tarn where tramper beings often tarried.

Before that we’d been hidden from sight. He knew nothing of our journey up the valley. How we’d tumbled out of the shuttle with the Medium group and headed for Lake Matiri Hut. 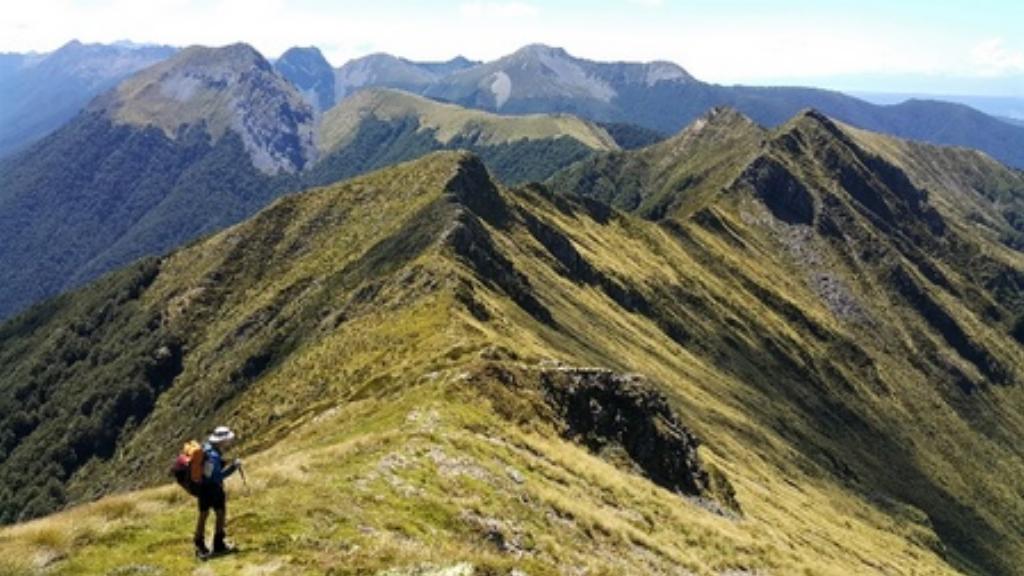 That the groups had there parted ways, ours taking the laboured trudge under 10-day packs to McConchies Hut.

This wasn’t our original plan. This had called for an inspection of The Needle and The Haystack, then an adventurous scramble north along the ridge and precipitous drop from point 1326.

The rain had put paid to that. And kept us at bay for a second night in McConchies.

He was equally oblivious to our ordeal on day 3. Our early linked-up crossing of a swollen, frenzied side stream. Then 4 ks of cautious travel up the now rambunctious Matiri River on an unkempt track. Topped off with a ferocious battle up a tutu suffocated slope as we heaved, hauled and bludgeoned our way up onto the ridge. 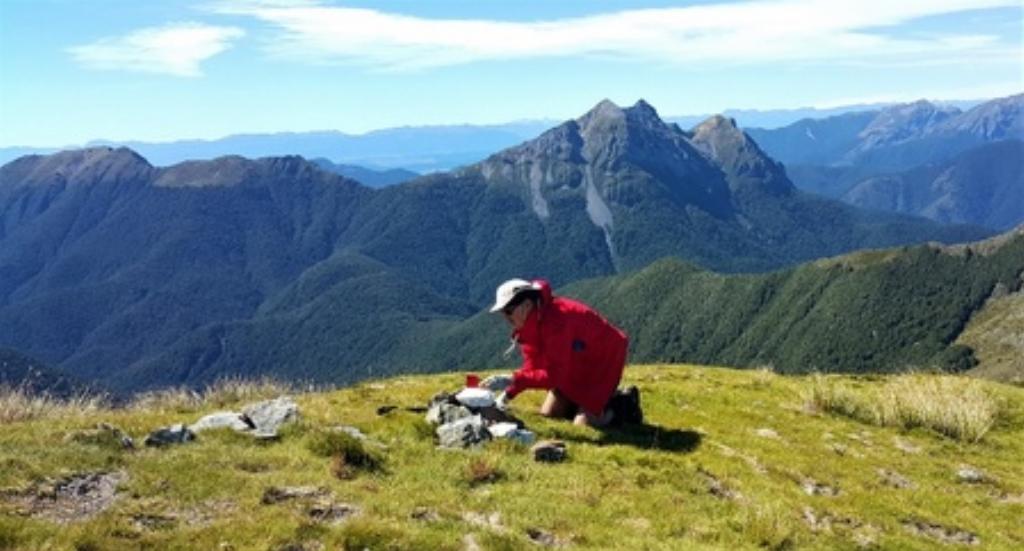 Then the world righted itself and our spirits improved. We searched out a stunning lunch spot perched high on a slip face with the world spread out endlessly before us. An enchanting saunter along a beech and dracophyllum dominated ridge followed. Down and across the ample pt 736 clearing under a cloudless sky, a short section of beech, then an agreeable romp down a picture-perfect stream to return to the Matiri River. A slog up a hill next, skirting of Lake Jeanette, then alternating river and boulder-strewn flats travel to reach Hurricane Hut. 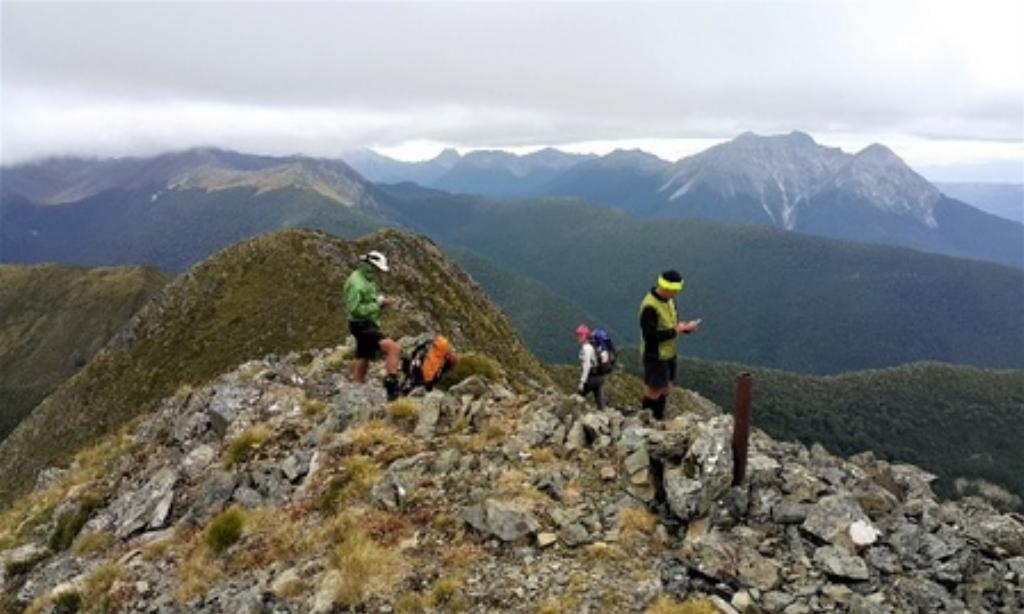 What a location! Dramatic, towering cliffs to one side, the valley spread out below, bush behind, and a gurgling stream alongside. Exquisite camping.

And so to day 4, our steady haul up through the bush and into his field of view.

At that distance we provoked little more than idle curiosity as he watched us set up camp on a tussock and snowgrass bench above the tarn, while away a lazy afternoon, and revel in the perfect weather and panoramic views.

Lunching on point 1453, we studied our next challenge - the formidable, gnarly Nugget Knob. But this proved less onerous than it looked. He watched on as we conquered it with ease.

Sauntering to the end of the ridge, a steep 300m descent through open beech led us down to the Wangapeka Saddle. A right turn then had us ambling down the picturesque upper Wangapeka to overnight at Stone Hut.

He noted our progress, saw us drop from sight, and wondered if we would ever reappear. 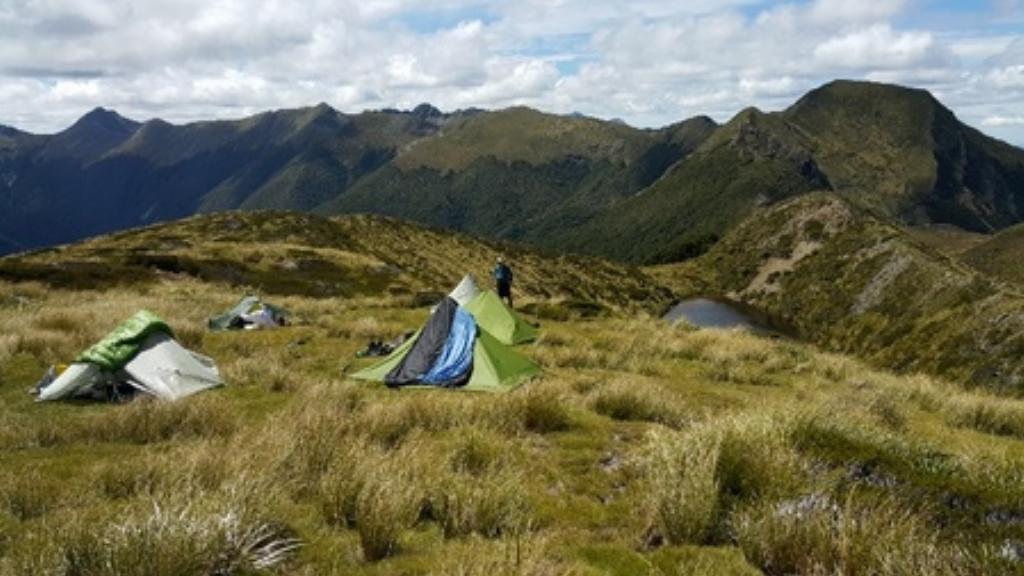 Again the weather was kind on day 6. We started with the easy tracked ascent up delightful Stone Creek. Swift flowing with many small waterfalls, this is blue duck habitat, as the Whio Forever traps attested.

We crossed a large tussock clearing that the sun was just beginning to expose, headed up through more beech, and our track topped out in the vast basin lying at the foot of Mt Luna.

The trick here is to find a route up to the saddle or ridgeline with the least possible energy-sapping hauling up through prolific tussock and the obligatory hidden Spaniards.

We failed. Five in the party, five different routes, not one the slightest bit easy.

He saw us again the moment we popped out on the ridge. This time we had his full attention - so much closer now, coming within reach.

We dropped packs, caught our breath, and eyed the likely route up Mt Luna.

Again this proved easier than it appeared - without packs a mere 25 minutes. 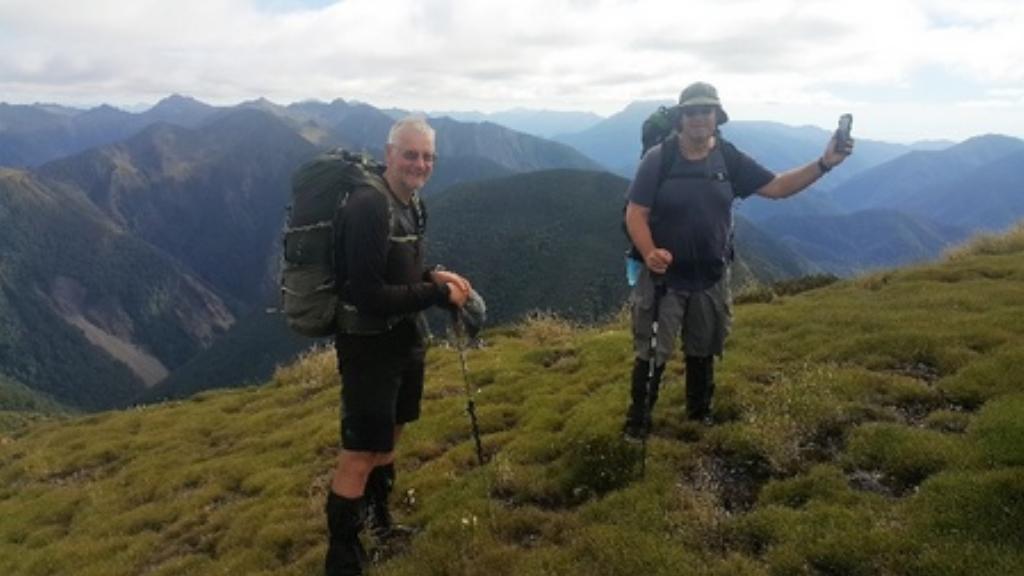 He watched our ascent, our childlike antics on top, how we repeatedly held small rectangular objects out in different directions. Our irreverence in sometimes pointing those objects at him, pleased him not at all ...

After lunch back at our packs, we followed the ground trail up point 1578. This led to a narrow spur with grand views over Luna Lake.

And then, what’s this? Trampers! The first seen in a week.

Getting closer, hold on, they look familiar. None other than our very own Medium party out for a day walk.

And so we shared a night at Kiwi Saddle Hut, and next morning an absorbing ascent of Mt Patriarch in perfect weather.

He watched our climb and descent. Then how we left the Medium party and started heading his way. Along the narrow ridge we went, scrambling up and inching down the several sharp protuberances.

He saw it all, observing our every move.

And now our gaze turned to him. There he stood in awesome majesty. Precipitous, imposing, fearsome, aloof. 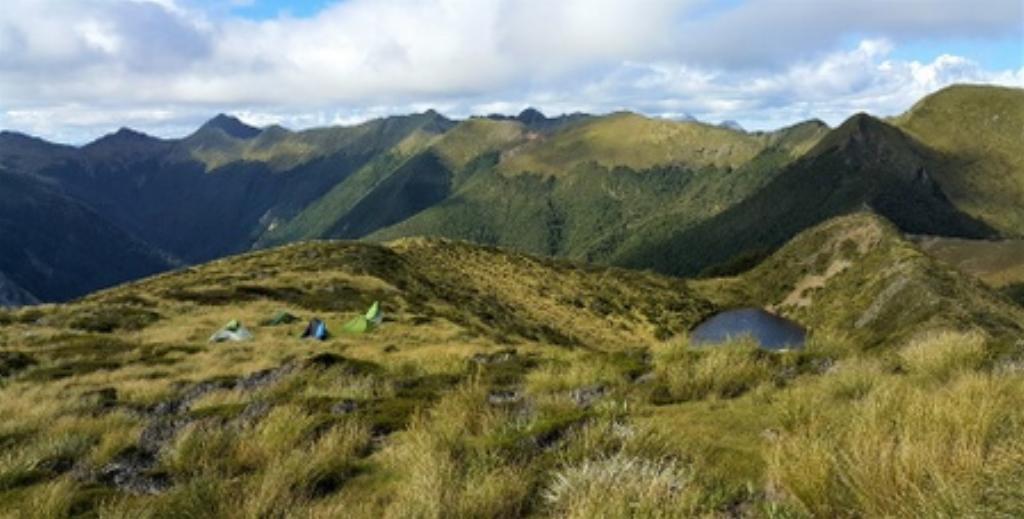 Mounts Arthur and Patriarch are the poster boy bookends of the southern Arthur Range. They bask in the limelight with their bulk, handsome good looks and easy access.

But it’s Mt Sodom who calls the shots. It’s he who ordains who shall and shall not pass along the range. For the route requires venturing onto his flanks and completing a nervy, exposed sidle to safer ground beyond. This sidle is the crux of any range traverse and not for the fainthearted. Only possible in his benevolent moods, it requires his acquiescence.

Mt Sodom had looked upon us, judged us and decided whether he would allow passage. And as we descended to John Reid Hut we knew not what he had resolved. We would know on the morrow.

Dawn arrived with a fiery blast - shepherd’s warning. Mist engulfed all. An eerie orange-red light splashed momentarily across the tussock. A blood-red rain shower bolted across the valley below.

Light rain fell, a light breeze blustered. Not too bad. But we were way down on the sheltered side, well off the ridge. What would it be like up there in the clag, exposed to the elements?

We decided to give it a go.

We regained the ridge and the wind and rain slammed into us. Relentlessly, mercilessly.

Whiteout navigation, the buffeting gale and greasy conditions slowed our progress. We inched towards him, blindly.

He knew we were coming of course. Nothing escapes him, nobody sets foot in his domain without him sensing it. What had he decided?

Today we had to get past the sidle and camp further along the ridge.

Or abandon the traverse. With storm conditions and a worsening forecast we were aiming for Skeet Saddle. But that lay several challenging hours away. And would depend entirely on his magnanimity.

It didn’t take much.

He needed no thunderous proclamation. Just a flick or two of prolonged, stinging horizontal rain and a few even more vigorous squalls.

We got the message. Today was no day to be tackling the fearsome Sodom sidle.

He had communicated his decision - effectively and almost effortlessly. Today we would not pass.

Back we scurried to the safety of John Reid Hut, our range traverse now not possible for lack of time. We would exit early down Chummies Track.

By the next afternoon the wind had dropped and the skies cleared. I decided to head back up onto the ridge to drink in the views one more time.

What a difference a day makes. Now all was calm, the ferocity of yesterday gone. I could see for miles.

He looked almost benign today. I met his gaze. Sensing a better mood, I plucked up my courage and vowed to one day return. He divined my thoughts of course. Impassive as ever, he gave not the slightest hint if he would ever allow me to pass.