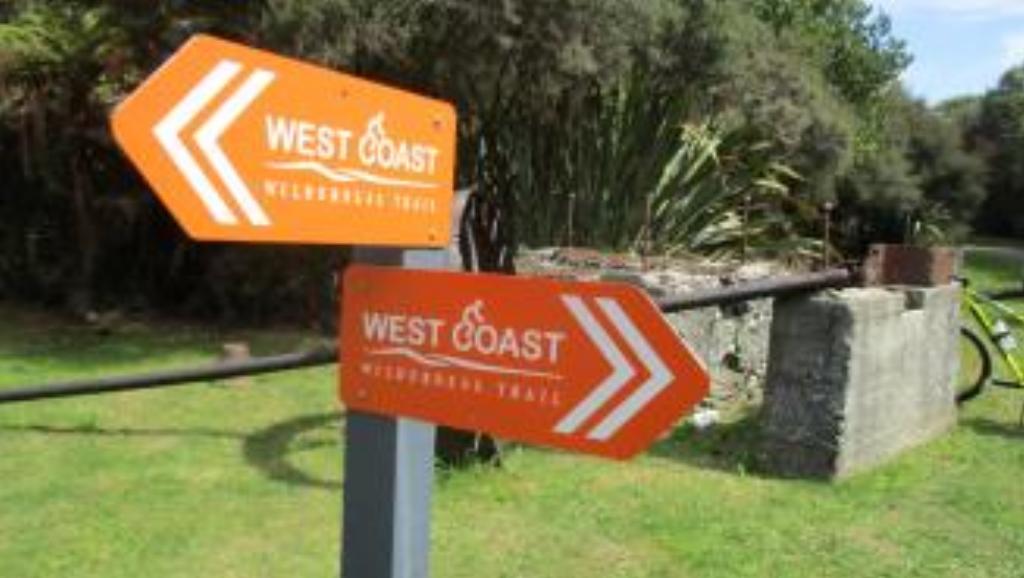 Day One: Ross to Hokitika 33km

Our trip began at Ross, once a booming gold mining town and now a small community. Its claim to fame is that the largest gold nugget "Honourable Roddy’ was found here. It was gifted to King George on his coronation, and subsequently smelted down into a gold tea set. (Like he really needed it).

Our morning route followed the old railway line passing by coastal wetlands and then crossing SH6 to head inland. We stopped at the West Coast Treetop Walk and spent some time there viewing the rainforest canopy from the elevated walkway. The 40 metre tower gave us great views across Lake Mahinapua and out to the Tasman Sea. 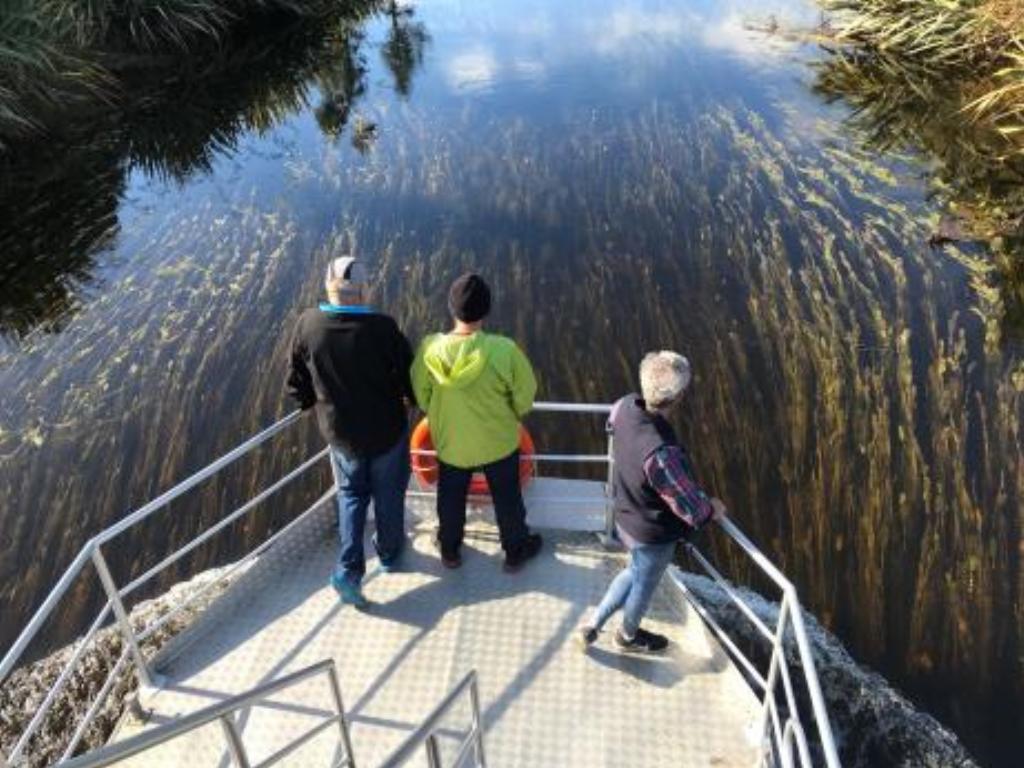 Cycling on we continued inland on the Mananui tramline, skirted around the lake to our accommodation for the evening - Scenic West Coast Waterways. Our stay there gave us the opportunity to cruise the Mahinapua Creek and to the edge of the lake.

The waterway was quite beautiful, the still, dark tannin waters reflecting the native forest. We were lucky to sight two kotuku (white herons). The husband and wife team who run the Kotuku Lodge were amazing and warm hosts.

A short ride took us to Hokitika to explore the sights there and then on to Lake Kaniere. This entailed riding along the Kaniere Tram, past Hurunui Jacks, the canal road and onto the Pipeline.

This track was particularly well made. It was surrounded by podocarps and had an open water race running alongside, so as well as being quite pretty, it was good fun to cycle. 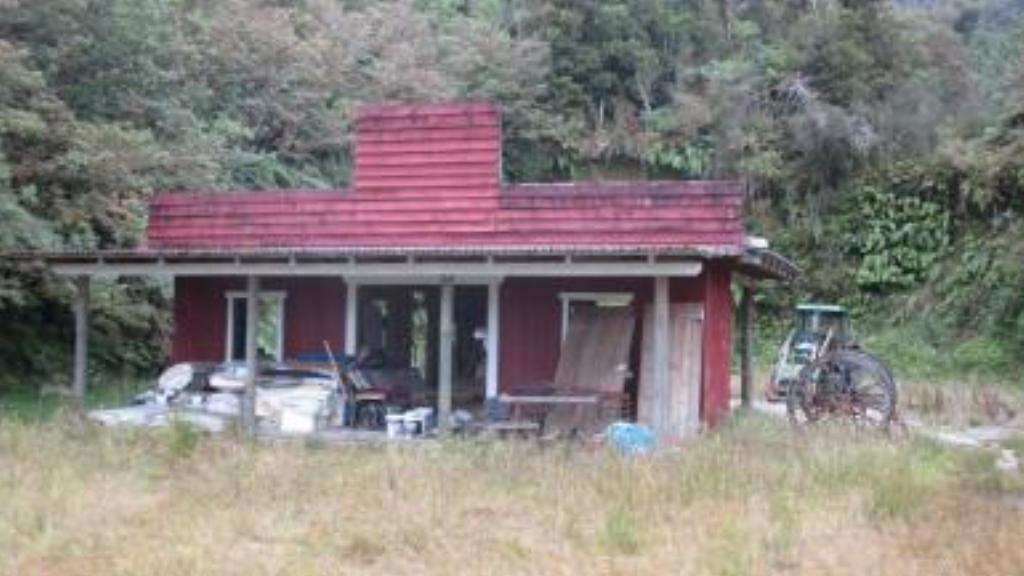 Eventually we came out beside the Lake itself where we had lunch. Then we headed up the Arahura Valley beside its river before climbing up a well-graded zig zag track to Cowboy Paradise. We had heard quite a lot about this place and its owner. What we found were on one side the remnants of four shooting ranges that had been excavated out of the hillside

and mocked up exteriors of a Wild West town.

The other side followed similar architectural style with a kind of large saloon that had stunning views out over the valley. The saloon was linked up by a wooden walkway to several accommodation buildings. Apparently access to Cowboy Paradise was critical to the development of the trail. It was here that we stayed and had our consecutive third roast dinner.

The day was a bit overcast as we headed down to the Kawhaka intake. This section is regarded as the ‘jewel in the crown’ of the trail.

Indeed it was. We were completely surrounded by bush and enjoyed the construction of the trail with its McPherson Creek suspension bridge and gentle switchbacks. Unfortunately we did not spot any of the whio/blue ducks that live on river. 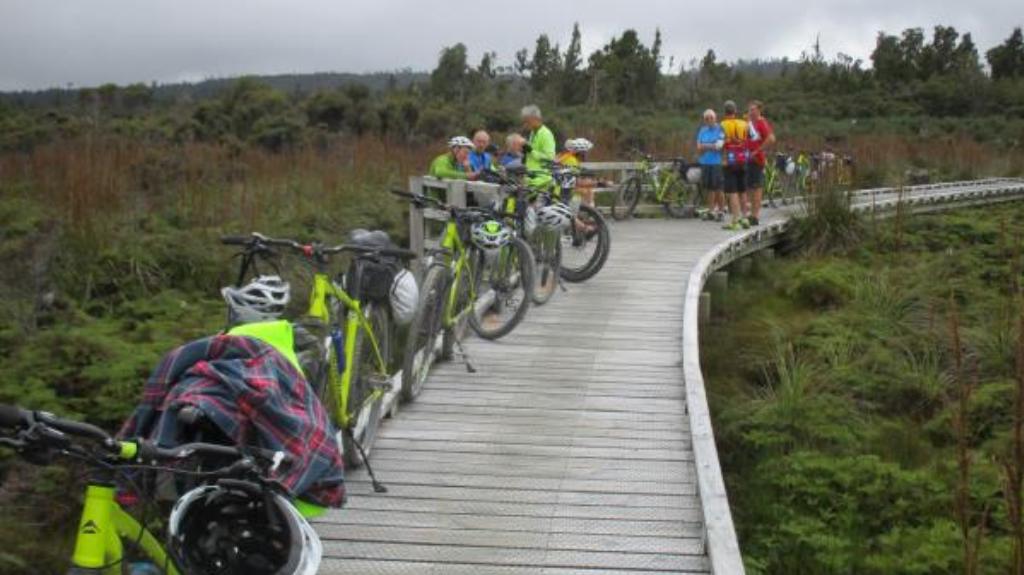 After lunch on the Boardwalk we cycled past the Kumara/Loopline and the Kapitea Reservoirs. As we neared Kumara we could see huge stacked banks of stones, remnants from when Kumara was regarded as the largest sluicing area during the 1877 gold rush. We took time too to take the ‘ten minute’ walk to view possibly the biggest rock in the world - the Londonderry Rock.

Our accommodation that night was at the historic and newly redecorated Royal Empire Hotel.

The first section went through the Greymouth Kumara Tramway and then close to the State Highway.

After a morning coffee at Bernie Monk’s Paroa pub we detoured up to one of the historical sites of Shanty Town. Here a replica of an old gold mining and sawmilling town has been built along with an operating steam engine that takes people up to a replica of a sawmill. This explained the hard work and dangers that were involved and had some poignant stories of the men and their families.

The track continued to follow the road until we got closer to Greymouth where it stayed close to the west coast beach. A few of us were lucky to see a pod of Hector’s dolphins fishing amongst the waves at the mouth of the Grey River.

Once we’d settled into our backpacker’s lodge (which had originally been a presbytery) we continued on with our education about the local West Coast culture and history, taking a tour of the Monteith brewery and a tasting of its beverages. We learnt that Dennis had been one of the consumers who protested against DB’s proposal to shift the brewery away from Greymouth up to Auckland. Given Dennis’s predilection for beer, this must have been quite a trial for him - but great to see the power of consumers being exercised and effective. 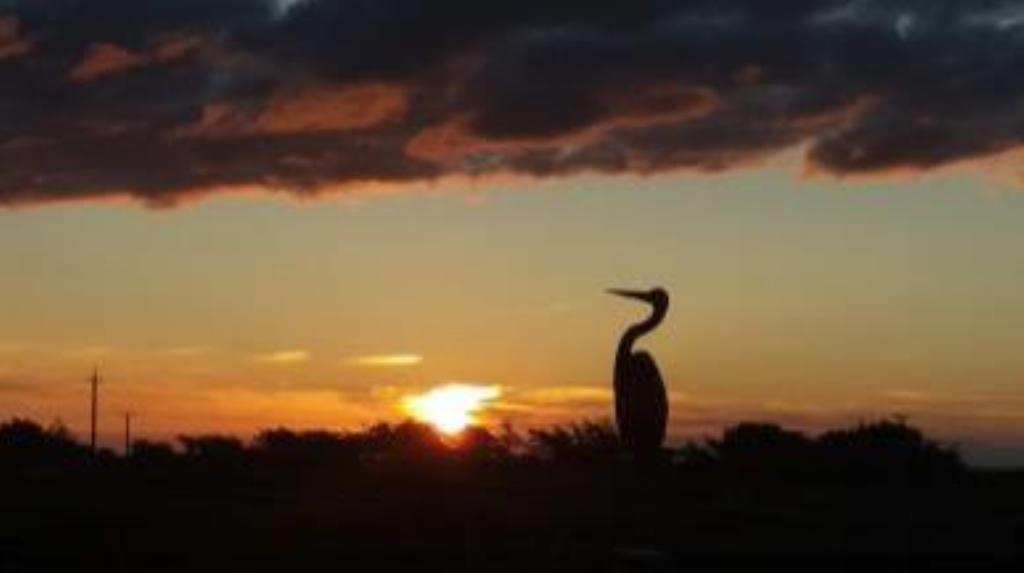 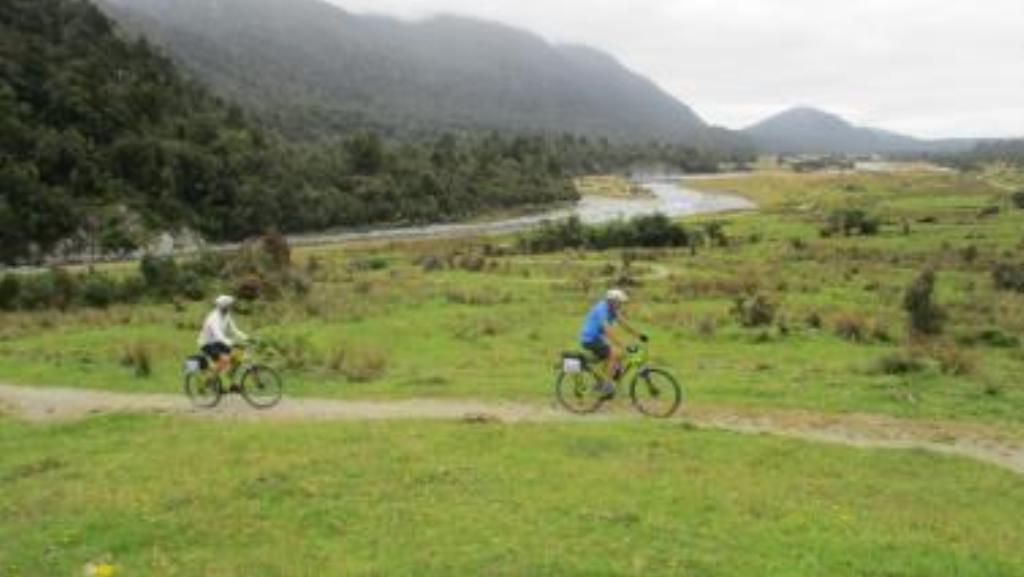 By this time Margaret’s cold really knocked her and so she wisely got a shuttle to our Punakaiki lodgings. This ride however, involved us cycling on the main coastal road which initially was extremely busy with traffic. Not pleasant. 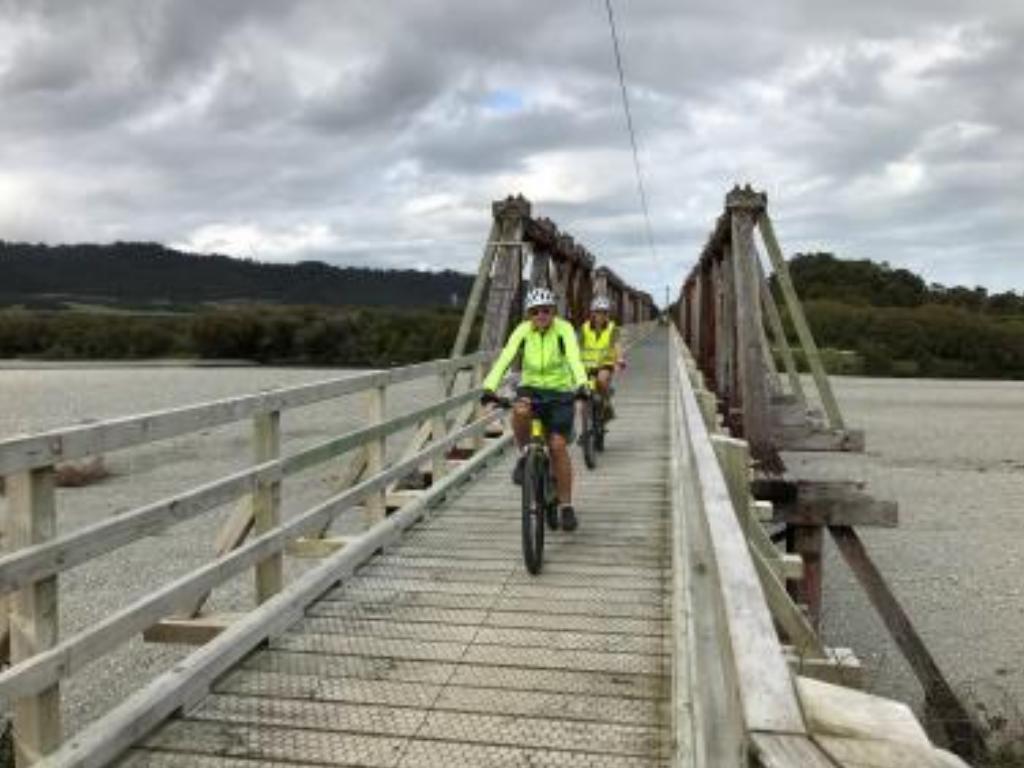 Along the way there were some long steep hill slogs, followed by exhilarating ‘woohoo’ downhills. The views of the coastline north and south were clear, so clear that looking back we could see the Southern Alps and Aoraki Mt Cook. 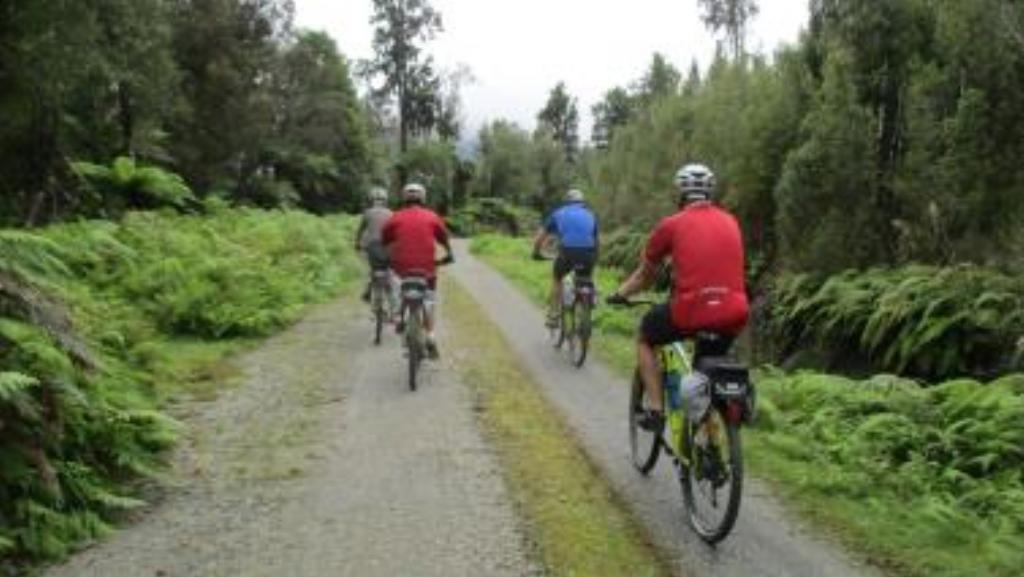 We pulled into Punakaiki in the afternoon to be treated to the sight of battering, boiling waves and a fumarole called the Chimney puffing out a fine wetting mist. We were lucky that our visit coincided with the high tide and strong swell. 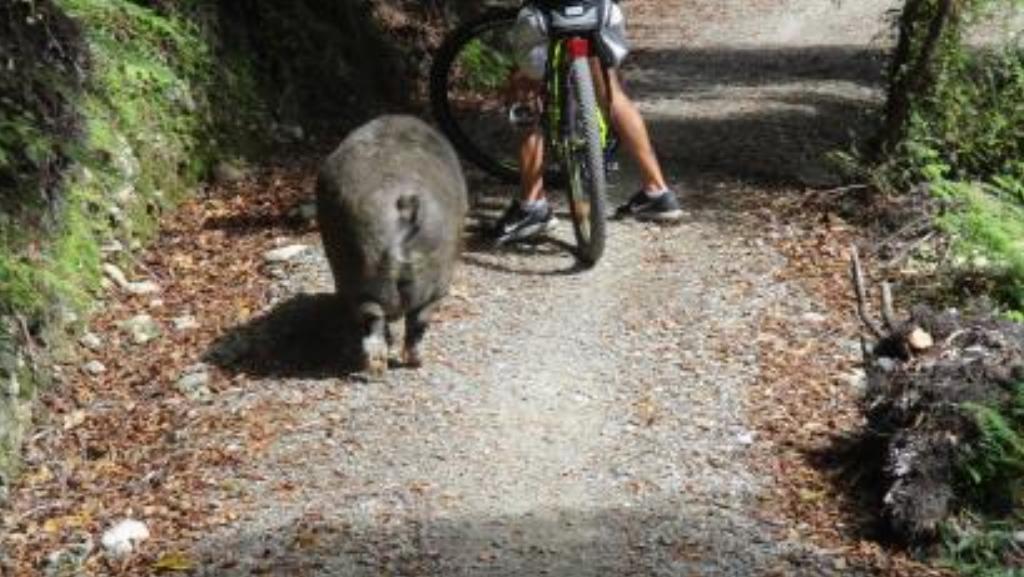 Our last day involved getting a shuttle back to Greymouth and then a trip on the Transalpine Scenic railway. This took us through some quite spectacular country, particularly through the section from Arthur’s Pass to the plains.

Our sincere thanks to Margaret and Terry for all their time and organisation. It was an excellent and well run trip which gave us all real insights into the history and beauty of the West Coast. The West Coast Wilderness Trail is a must do for those who enjoy cycling and there are also sections that can be walked. Put it on your ‘To Do’ list.