It was late morning on Easter Saturday when Brendon and I farewelled Alwyn at the end of Middle Branch Road, inland from Hokitika. Westland had enjoyed a week of fine weather, but now the clouds blanketed the mountains and rain was tumbling down. Alwyn drove away along the muddy access road, the start of a long drive back to Nelson, while Brendon and I looked forlornly at our packs and the gloom ahead. Brendon had left his car at Arthur's Pass and we had no firm idea as to how to get there in the 6 days allocated.

As it turned out the weather would become kind to us as we went through three gaps in the mountains, a saddle between Westland river systems, a pass on the Main Divide, and a col between two Canterbury catchments. But with a couple of wet days upon us, a trip up the Toaroha Valley track was the only way to get a leg in. I had been in the valley before, on a Tararua Tramping Club trip in the early '70s but my memory of that experience was even dimmer than the weather. I did remember, though, the remarkable stands of cedar (kaikawaka) around Cedar Hut, which Brendon and I reached in a soaked state about 4pm. There is a fairly new hut here now, which was very cosy with insulation, double glazed windows and warming fire. 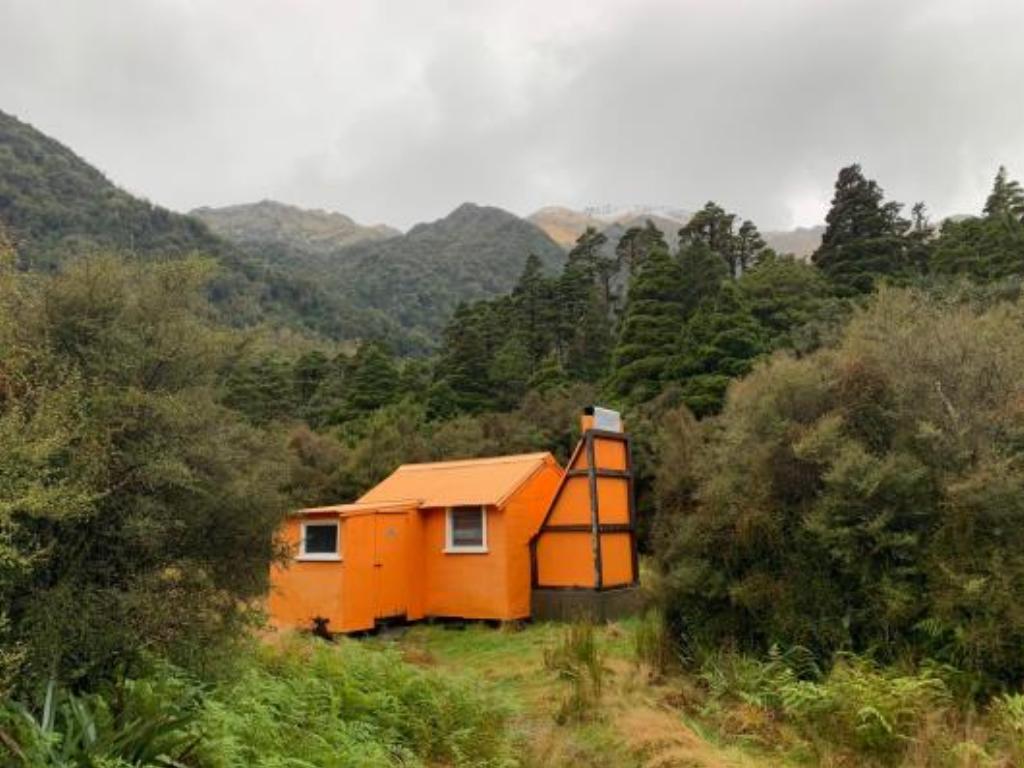 In this valley there are several access routes to surrounding tops, huts and bivvys, which were installed for deer culling operations by the NZ Forest Service (DoC's predecessor). In recent years DoC has been unable to maintain some of these facilities and a volunteer organisation, Permolat Group, has been busy restoring them. Had the weather been good we would have been tempted to ascend one of these tracks and try our luck on the tops. But with rain persisting, the second day saw us continue up the valley. Beyond the bush at the head of the valley, DoC had marked the route with a good set of poles to Toaroha Saddle Bivvy at 1200m. It was a good place to call it a day. We enjoyed the snugness of our little refuge as the wind battered and shook the well-tied-down structure.

Spirits lifted again once that torment was behind us and we enjoyed a recovery lunch on warm sunny Mungo rocks, not far below the Brunswick Creek confluence. Our first two days were fairly slow going but this morning's speed was even worse, and it was time to consider our options. We discussed heading up valley to Hokitika Saddle, a recognised route I had done with the TTC party, or attempting Mungo Pass, east of Brunswick Creek. Map contours indicated there could be problems on the eastern side of Mungo Pass, but always keen for a challenge, and with the expectation of good weather, we chose the latter. We also recognised that there would not be time to climb a nearby peak. 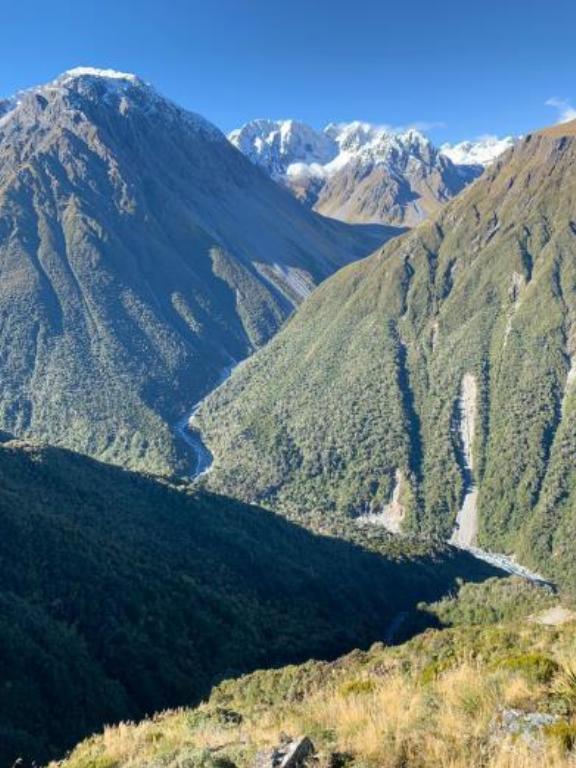 Tramping is a journey of ups and downs and this rollercoaster pattern can also apply to emotions, like on our third day, Easter Monday. Emotions shot up when we opened the bivvy door at day break to be greeted with a clear sky and magnificent view. With fresh snow on the higher slopes, we relished a little saunter along the tops, instead of descending the track below the bivvy to our next river, the Mungo, a tributary of Hokitika River. After an hour or two, wandering in a easterly direction, we chose a spur beside Lead Creek to take us into the Mungo valley. This descent dropped us into a world of vicious scrub, hidden bluffs and fury about our predicament. How emotions change! A nasty wasp nest, unexpected in this environment, was quick to punish us for some reckless navigation. 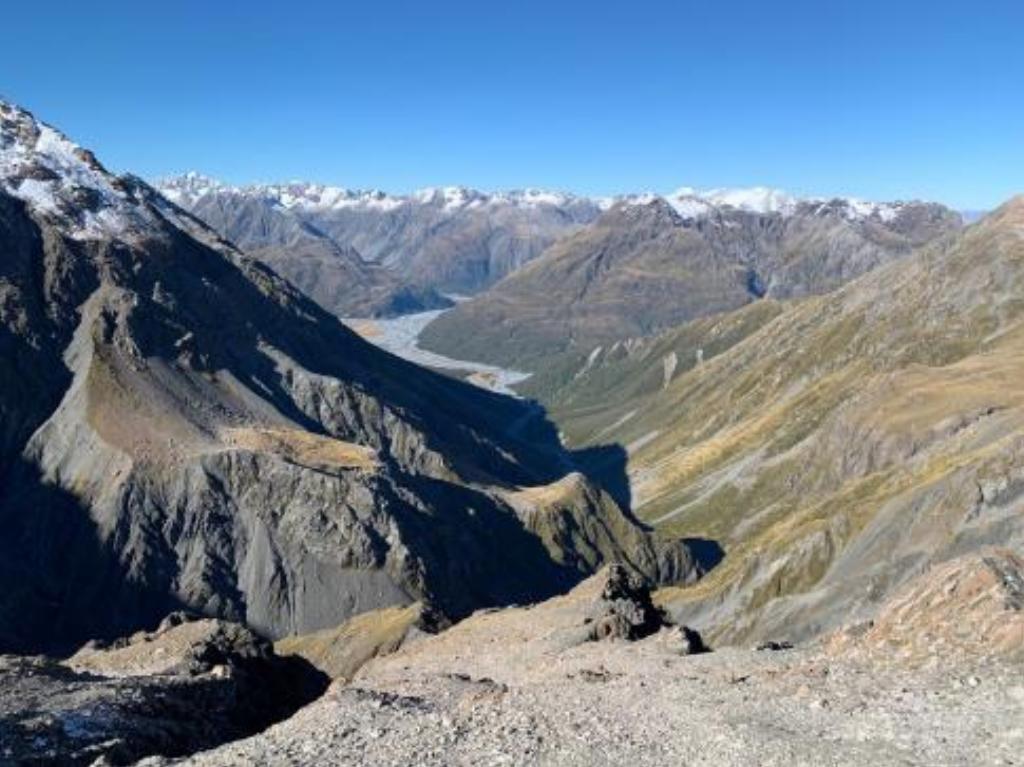 Our route into Gibson Stream

The Mungo was crossed without difficulty just below the Brunswick confluence, but once we started heading up this fast flowing tributary we found crossing pretty risky, so lost time scrambling through scrub and sizeable boulders. Higher up we came to a site where half the stream's water cascaded out of the scrub-covered valley's eastern slope. The strange thing about this was that there was no sign of a side valley at or near this point. The slope just continued up to Mt Park. So where was all this water coming from? After this oddity, crossings were easy and progress faster. On reaching what looked like an old moraine wall lying between the main valley and the side basin below Mungo Pass, we camped. As the sun dipped below the western ridge and the cold set in, a dozen curious kea entertained us.

Next morning we scrambled over the wall to enter a wide bouldery waterless basin which rose gently to the pass. As we climbed we could hear water roaring under the rocks. Presumably all the water one would expect to see flowing in this basin (and the map confirmed there was a watercourse) was somehow diverted under the mountain slope to the large cascade that fascinated us the previous afternoon. Very strange. We had lunch on the pass (1757m) with great views all around. What a privilege to be in such a place! 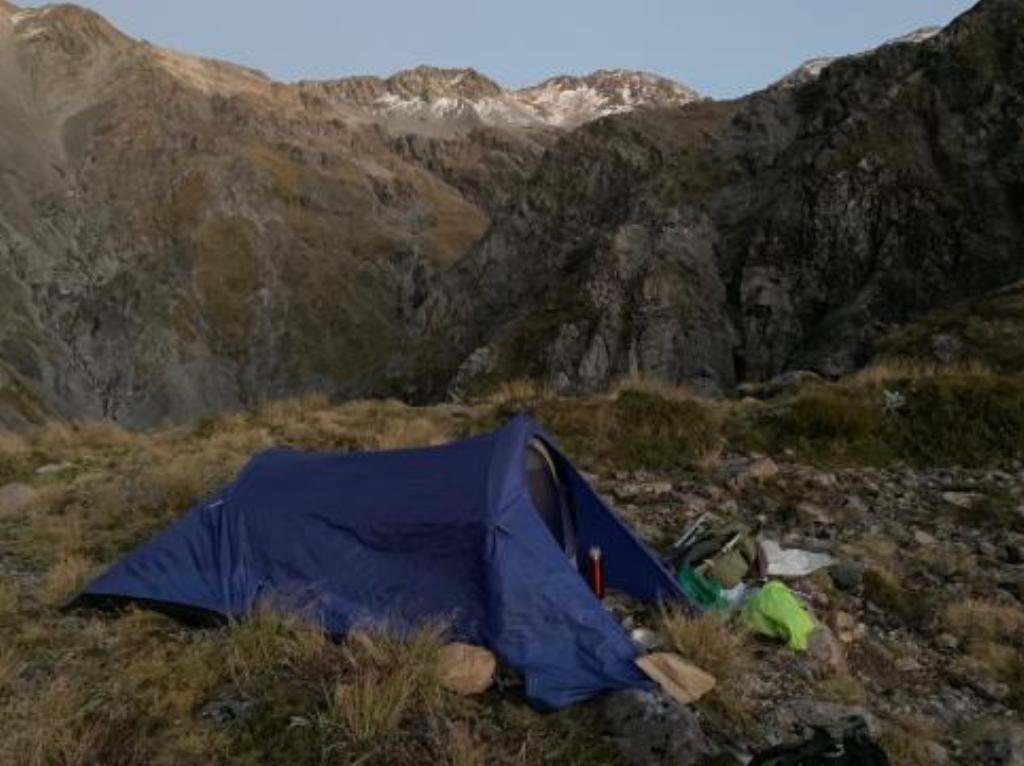 And now, how to get down? There seemed to be a good link to a grassy spur, but Brendon suspected hidden bluffs and preferred a steep scree slope. It was fairly difficult descending a rocky gulch to access the scree, but once onboard, movement was rapid. At the foot we met Gibson Stream, a shingle highway we hoped. But no such luck. We spend a few hours clambering around cascades and taking short-lived sidles, dreaming that the valley would flatten out around the next corner. Finally, we were enveloped by physical and mental gloom as we tackled what would have to be the last slope of the day. This effort became an upward climb amongst rock and odd bits of snowgrass, for sidling here was an impossibility. In the darkness it looked like we would have to sit the night out but, unbelievably, 200m above the stream, we reached a knoll with water nearby. A miracle campsite!

We woke on Wednesday morning to another fine day with only a couple of kea in attendance. From our viewpoint we marvelled at the ruggedness of this steep-sided valley. Fortunately from our terrace a secure scrub-covered spur led down to what was at last a shingle-choked Gibson Stream. The chasm was behind us! Now it was time for fast travel, but it took the rest of the morning to cross the extensive Wilberforce River gravels to the Burnet Stream on the northern side. During the morning it was interesting to see that leatherwood was present in the scrub belt. I did not realise this notorious shrub reached into Canterbury. Also of interest were fine stands of cedar on some river terraces.

We took lunch at the confluence of the Weka and Burnet Steams and by the end of the day we were camping on a flat bed of gravel underneath White Col at the head of Burnet Stream. Kea seemed to have lost interest in us, for during our stay in this rather desolate landscape we only heard one flying high above us. But during the night there was the disturbing sound of rock falls on the steep-sided slopes. 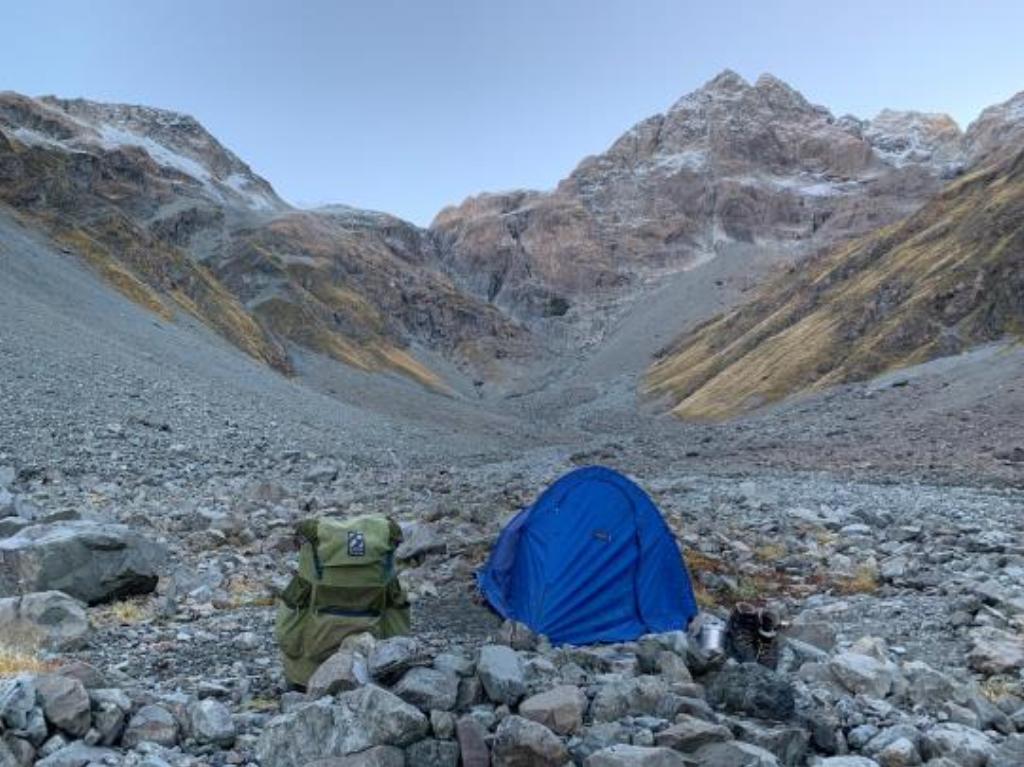 Our campsite beneath White Col

Thursday's climb over White Col found ice axes to be useful as we sidled westward between the two dips that separated the White River and Burnet catchments. But, pleasingly really, our crampons were superfluous and they remained in the packs, unused for the whole trip. From the Col we could see the Canterbury Mountaineering Club Barker Hut, a great place for lunch. The route down the White River into the Waimakariri valley has been impaired by recent washouts, and by the time we got to Anti Crow Hut it was 9pm.

Friday, compared to the other days, was just a walk, hopefully only to Klondyke Corner, followed by a ride to Arthur's Pass. At the Corner we quickly baulked at the idea of pleading for a ride, so hid our packs in the bush and soon knocked off the distance pack-free. A hearty lunch on the balcony at the popular coffee shop marked the completion of our journey. Often this destination is visited by kea looking for an easy lunch. We loved having kea on our trip, but were pleased to find that they were absent today, for their presence in tourist spots is a threat to their health. 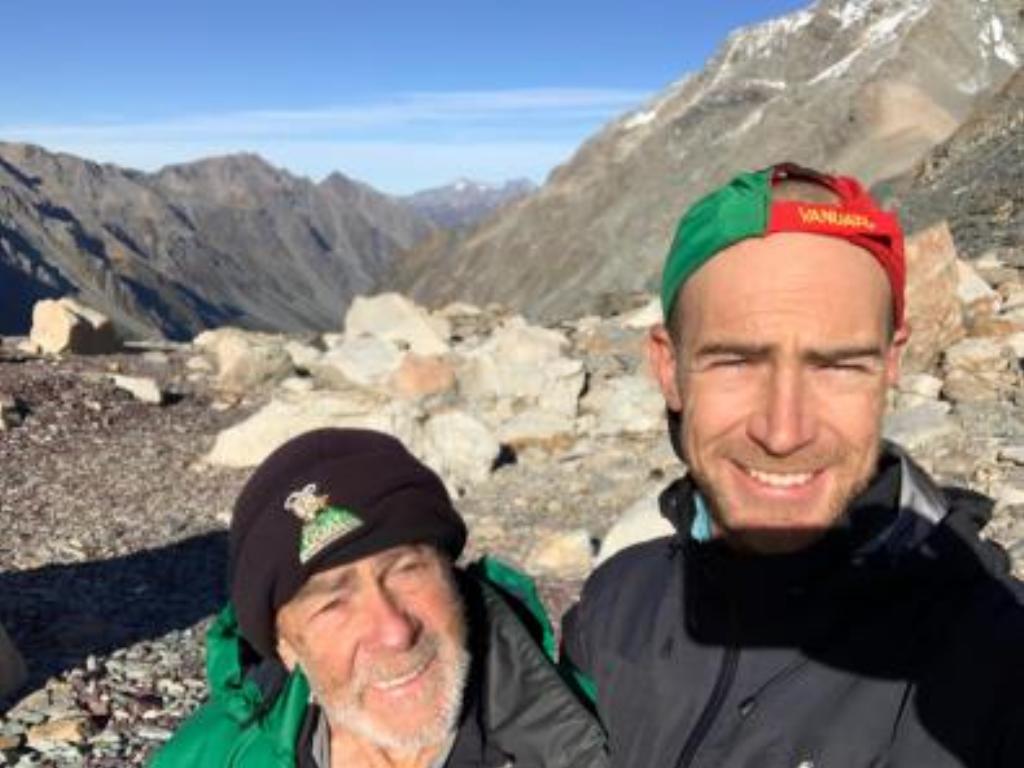 It was wonderful to do this trip with my son, a fleet-footed Christchurch Tramping Club member. It used to be that I would carry my fair share but now the tables have really turned with Brendon insisting on carrying most of the party gear. And his pack supplied a never-ending trove of goodies, with Easter eggs every night!