I am home now appreciating my previously unnoticed incredibly comfy bed and, as the group I was with will know, the softness of the carpet beneath my feet. I am looking at my mud-stained, well-worn map and am trying to remember what it has been through.

The first evening was more of a tactical manoeuvre to find a good shelter for the next morning at the Lewis Pass. Breakfast on the first morning, the beginning of a routine, bowls lined up, food shared out and appreciative munching. After this, half the group battled with the rain to see if the first stream was passable. Twenty minutes later we watched in awe as mud and stone flowed before us at great speed. It was such a small area to cross and yet it was impossible. We retraced our steps and, with the rain so dreary, decided on plan ‘hot springs’. Thanks, Maryjane, for suggesting that one. The rain eased and there was a unanimous decision that another night on the bus was best avoided. We went to Lake Daniells Hut. The view was relaxing from the hut: lake and mountains surrounding.

The next day we returned to the Lewis Pass and crossed the stream easily. We made it to the bridge and then sidled down the bank, with a couple of torn things including Alison’s shorts, which she hid extremely successfully! We headed up the river and realised that we needed to do a river crossing. After the crossing, the valley we wanted to climb was just out of reach and so we decided on a bush bash back to the St James Walkway. It seemed that, whether we liked it or not, this was our destiny. We joined the Cannibal Gorge track and reached Ada Hut where we set up camp. It was lovely to camp and we managed to find a great spot without too much marsh.

The next day I was woken by an angel outside singing - no, wait, it was Alison singing Happy Birthday and a chocolate bar all the way from blighty - bonus! It was decided to pack up our tents and bag some beds in the Ada Hut. We embarked on a day trip in search of tarns. It was an almighty climb and Brian’s mountain goat tendencies blossomed. Once we reached the top, Mike provided liquid relief in the form of chocolate liqueurs - yum! What a birthday treat! We circumnavigated the nasty Spaniard successfully and returned to Ada. Wine for dinner, thanks Antal, topped off a great day.

New Year’s Eve and we headed to Christopher Cullen’s Hut. We were greeted by horses. Vicky ate a power bar and then that was it, we didn’t see her again for the rest of the day, just this huge pack in the distance with these tiny legs underneath! Mike decided that we would camp around Anne Hut area. It was quite a tiring day, being out in the open with a relentless sun. We crossed the bridge with varying degrees of confidence and finally found a 5-star camp site. Brian’s pyromaniac leanings came out and he and Maryjane were last seen heading to the river. Vicky made one of her many excellent meals and afterwards we all headed down to the river bank. Brian made his legendary billy tea, complete with a shoulder-swinging action. We all sat around the fire. Alison and Brian did some cool dance moves and the group decided that they should be dance partners, although did their noses have to match or something? It was a fab New Year.

Next day was Kay’s birthday. This group certainly knew how to drag out the celebrations! We walked to Boyle Hut which had a great view. Kay had flowers in her hat, courtesy of Geoff - aw! We had a really nice cheesecake to celebrate and sang Happy Birthday and even had a candle.

On the last day of the first leg we said ta-ta for now to Alison, which was sad. We almost said goodbye to Brian, but some gentle and not so gentle persuasion worked wonders and he stayed, which was great. We headed to the springs once we reached Boyle Village and became human again. Hair driers are simply amazing things!

Then it was the second leg and we headed to Nina Hut. On the way there Kay and I discovered a beautiful pool. The water was Antarctic and Kay stayed in for ages, so deserves a chocolate fish for that. Geoff and Kay were the only hardy folks that night who ventured outside - good on them.

The next day we finally went to the tops. The initial climb from the carpark on the Lewis Pass was certainly memorable. On the top, the view rivaled that from an aeroplane. We headed down to the tarns and found a lovely spot and there was this amazing discovery - no sand flies. The next day the cloud came in, so it was decided to abandon going to Brass Monkey biv and we went for a day walk up to look at The Apprentice and Mount Technical.

The weather forecast that evening mentioned the words ‘gale’ and ‘50-100 knots’ quite a few times. Mike decided that we would get up at 6.30 and no one disagreed. It seemed unbelievable that such a beautiful, calm evening could be followed by gales.

Next morning, we were welcomed by Gale. We did manage breakfast which was rather civilised in the circumstances. We retraced our steps and were not as interested in the view as in getting below the tree line. Eventually the bus was in sight.

The weather was threatening to turn wet over the next two days, so we stayed down low and went on the track to Lake Sumner. It began with a swing bridge and then settled into a beautiful beech forest which was a nice change from the tops. There was a pool which was covered with red beech leaves and looked deceptively like a beautiful mat to be walked on.

We reached Hope Halfway Shelter. This was my favourite spot. Maybe it was the toilet having no door, who knows? That night was relaxed and we ended up reading countless Next magazines and learning tips on absolutely everything, although tramping possibly encompasses the healthy existence all these magazines try to capture, so perhaps dog-eared second-hand books would have been more useful. 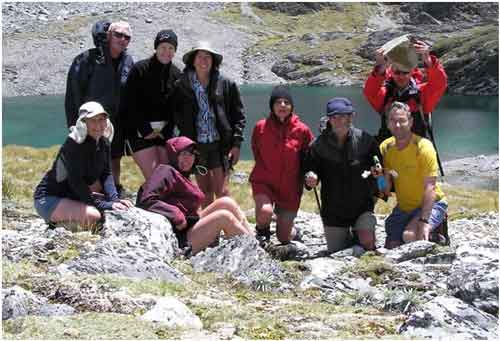 We planned to reach Lake Sumner the next day, but, as the sun rose, the group had a few plans. Geoff, Vicky and Antal headed out, Brian and Maryjane also tramped and the rest of us supervised the expeditions from HQ. The next day was the last and then we aptly waited in a bus shelter for the other group and the bus.

The showers at the end are always brilliant - finally peeled off the second skin of tramping T-shirt and shorts that had started to take on a living form. Now, it all seems like a distant dream of wild horses, tarns and fast-flowing rivers.

Thanks, Mike, for organising this memorable trip and to everyone else for creating an unforgettable experience.