The Christmas group handed over Big Blue at midday on Sunday 9 January and we headed for Arthurs Pass. We stopped at Kura Tawhiti (Castle Hill) to view the amazing limestone outcrops and at Arthurs Pass booked into the YHA for the night.

This was intended to be our warm-up tramp, but it proved to be harder than expected.

We left the YHA, parked Big Blue at Greyneys Shelter (700m) and headed across the Bealey River at 8.00am. Wet boots first up! Following a poled route we climbed steadily up river flats and river bed to the east branch. Then we climbed above the gorged river on tree-rooted tracks with an interesting chain-assisted steep descent at one point. We heard a couple of waterfalls but only had a clear view of one during the ascent. Greyneys to Edwards Hut (1050m) is only a 350m ascent but, with lots of ups and downs, everyone was happy when we reached Edwards Hut at 1.30pm. We contemplated tramping up the valley for an hour and camping to shorten the next day but finally only Keith and Margaret took this option - everyone else preferred to enjoy the hut, rest up and make an early start.

We set out at 7.00am into the mist knowing we had a reasonably long day ahead. Early river crossing made for another wet-feet day but otherwise the going was easy in river flats. An hour later we picked up Keith and Margaret who had found a lovely camp spot by the river, and carried on to Turuahuna Pass (1252m). The mist cleared to reveal a cloudless sky, magnificent mountain views and mirror-perfect reflections in tarns. The pass is all rock created by a massive landslide in 1929 from the impressive Falling Mountain whose name perfectly describes its appearance. We had lunch below Tarn Coll (1368m) and then clambered skyward up the small stream coming from the Coll. It wasn’t bad going until the last 20m of vertical ascent and then for those last metres we were pulling ourselves up on the tussocks. A French couple behind us watched our progress and decided to take the alternative winter route (DOC brochure) detouring part way up to the right (true left) and had a much easier climb even if it meant climbing a little higher then descending to the Coll. After a break at the top to admire the views and the tarn we followed the creek draining the tarn, sidling along some impressive cliffs on the way down. At 1000m we turned right into the Otehake and climbed to Walker Pass (1095m) before dropping down to a large lake. The women decided to skinny dip in the lake and we blokes left them to it (too cold for us!!). We expected a nice downhill walk beside Twin Fall Stream but instead encountered a weaving, somewhat overgrown track frequently winding through the stream, and a 100m climb above the stream to go around a waterfall, before making a descent to Hawdon Hut (750m) arriving at 3.00pm. An 8-hour day.

At last that easy day I’d promised! A cool, overcast day and an easy 3-hr romp downstream to the Hawdon Shelter (580m) and then on to Whites Bridge. Bob hitch-hiked to retrieve Big Blue while we had lunch by the Waimakariri River.

Our planned seven-day tramp didn’t happen. The forecast was bad for two days of the trip and with a severe weather warning with projected flooding for the sixth day, there was every possibility we would get stuck and be unable to get out. With some flight plans to consider, this was not a good option. So we decided to do the shorter Cass-Lagoon tramp and check the forecast on return. The DOC staff at Arthurs Pass were very helpful and gave us lots of their time to help study forecasts and review options.
Christchurch Tramping Club made a similar tramp in the area a week later and I obtained some useful information on the area via their website. It’s worth keeping this tramp in mind for another day for a fit group and allow for two contingency days for sitting out wet weather. 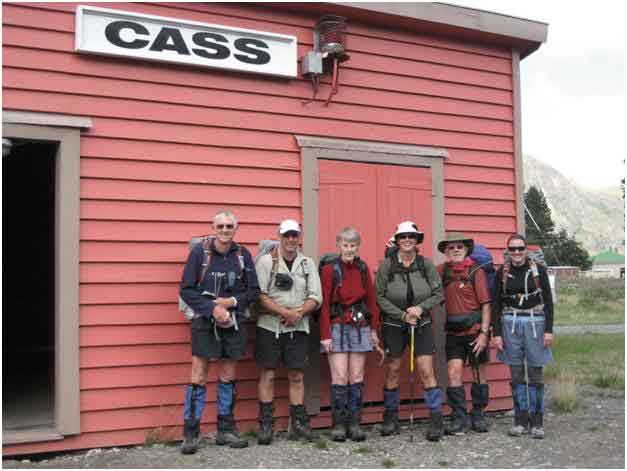 Great day. Lots of blue sky with some cloud. Taking DOC’s advice we parked the bus at the Cass railway station (parking is more secure) and took the obligatory group photos with the famous Cass station as background before walking to the track end (575m). Leaving at 9.10am, we followed the poled track to the Cass River and then started a gradual climb up the river, including many river crossings. Wet feet again! Into beech forest on a wide track, the climb increased and the river became little more than a picturesque stream. We soon reached Cass Saddle Hut at 1140m and after a short stop continued up above the bush line to Cass Saddle (1326m). Wonderful views down the valleys on both sides and we could see Hamilton Hut nestled in the bush 5 km away and 500m below us in the valley. It was a steep descent into the Hamilton Valley, dropping 300m in just over 1 km and then levelling out for a steadier descent to the hut at 800m. A five-hour day, leaving plenty of time for bathing in a ‘refreshing’ side stream.

Day trip to the Pinnacles in the Harper River valley, approximately 7½ km and 3 hrs downstream. (6 hrs return). Another blue-sky day and very hot in the valley. However, river crossings and wet feet kept us cool. The valley with the Craigieburn Range on one side (peaks 2000m) and the Grey Range on the other made it an interesting tramp. The Pinnacles are particularly interesting geologically - you can get right up close to see them. After lunch it was really hot and on the return trip every river crossing was very welcome and was followed by more refreshing bathing on return to the hut.

The forecast was for afternoon rain ahead of a wet Sunday so we left the hut at 7.00am but messed about on the three-wire bridge (practising our skill?) to cross the Harper. We could have crossed the river in a fraction of the time but there was a general feeling it might be nice to try a ‘dry feet day’. A gradual climb up the West Harper through beech forest and flats to the West Harper Hut, an original untouched forestry hut built in 1957. 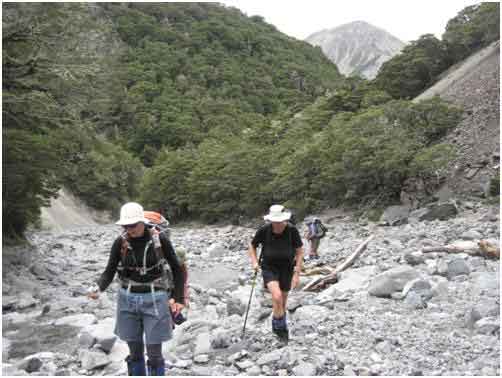 Two km upstream we took care not to get sucked into going up Long Creek (which could easily happen) with some good pole spotting by the team.

The Harper then changed nature. Strewn with boulders and with lots of evidence of tumultuous changes, this would be no place to be if the river were in flood. The track climbed above the river for much of the time before reaching Lagoon Saddle Hut (1150m). We had lunch at the hut before sidling around Mt Bruce. From 1250m, before descending to Bealey, we had magnificent views of the Waimakariri, and rain clouds gathering on the mountain tops made a dramatic scene.
Down at Bealey Spur, Bob once again did the deed, showed some leg, and quickly got a ride to Cass to pick up Big Blue. We headed to Arthurs Pass to check the forecast. Learning that a heavy rain warning was still in force we decided to have a night in Big Blue at Hawdon Shelter and then head east where the forecast was more positive.
Despite the change of plans we all agreed that the two tramps completed were great, in some wonderful country. Not having to put our coats on for six days had been a bonus, even if our feet were all wrinkly.

We decided to head east to Oxford Forest for a two-day tramp up to Wharfedale Hut and a possible climb of Mt Oxford. We drove to Ashley Gorge camp ground and had a leisurely afternoon to prepare for the two-day tramp. Alex was having boot trouble and decided to leave the group rather than risk further ankle injury - kind hubby who was in Christchurch drove out to collect her.

We parked at Coopers Creek carpark and set off on the Ryde Falls Track at 8.10am on a misty, low-cloud morning. An easy track through beech forest although the constant hum of wasps attracted by sooty mould was a little disconcerting. Made a side trip to Ryde Falls and carried on up the Wharfedale Track. Views of the Canterbury plains remained obscured by cloud so we stopped for lunch on the track and, on cue, the skies cleared. These tracks are popular with mountain bikers and during the day we met four. In total it was a 21-km tramp and we arrived at the hut at 3.00pm. A tidy hut with a lovely stream and water hole a short distance away was somewhat marred by a large wasps’ nest behind the hut. The plan was to climb Mt Oxford the next day but we were foiled by the weather yet again, with gale force winds and rain forecast.

With rain clouds threatening, we left the hut early and re-traced our route back to Big Blue, making it before the rain started. We stayed in the dorm at the camp ground and were happy to have a roof over our heads as the rain bucketed down.

After our two-day 42 km effort, we decided it was time for a break and headed for Christchurch to re-supply and spend the afternoon enjoying some culture and having a look at the aftermath of the 2010 earthquake. On the way into town we crossed the Waimakariri River in flood so were happy we’d made the right decisions regarding tramps. The highlight in Christchurch was going together to the Ron Mueck sculptures exhibition and then we all did our own sight-seeing or shopping. The next day, 20 January, was change-over day and Liz and Margaret left the group, while Keith Ayton, Jean Barton, Tony Walton and Neville Kay joined the group.