This five-day trip provided a delightful mix of diverse vegetation, sparkling streams, alpine tarns and tiny orange bivvies. Rain fell only at night and so our parkas remained in our packs while we were tramping. Despite being an unusually large party of 12 we moved well together and space was never a problem for our eight tents.

On the evening of 12 January we assembled at Boyle River Outdoor Education Centre. This lodge provided comfortable bunk-style accommodation and safe parking for our vehicles. The caretaker returned the bus to the lodge after we had been dropped off at the start of the Nina.

We followed a good track along the Nina past a gorge with deep blue pools. This took us to the site of the old Nina Hut, now removed and replaced with a newer building on the other side of the river. Three-wire bridges have been converted into more stable-looking ones with wire netting and planks down the centre. 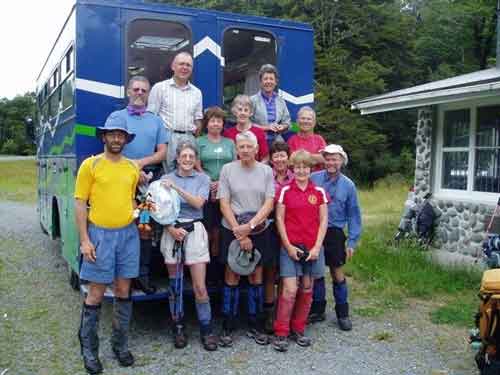 From there on travel was less easy, with tree roots underfoot, until we reached a clearing and the little orange Nina bivvy. This has two canvas bunks, a fireplace and a small bench and made a handy "kitchen", although the eight tents were pitched outside. This little bivvy became the subject of a Chris Ashton painting masterpiece which gradually developed as the trip progressed. Time: six hours total. An entry in the hut book described a failed attempt to reach Boscawen Saddle from the upper Nina and our mountain forecast that evening suggested rain and high winds for the next day so we decided to change our route to Brass Monkey bivvy.

We tramped back down the Nina to the Lucretia Track junction on the true left. Lunch was eaten after we had climbed 200m or so to skirt the Lucretia gorge. The tree-rooted track and a river crossing took us to the Lucretia bivvy in a grassy clearing. This two-bunk bivvy had the added luxury of a toilet! Time: six hours total. The hut book had an interesting and helpful entry from a James Broadbent describing a route he had marked to reach the bushline and a good route to Brass Monkey bivvy, our next destination. It rained heavily overnight and Sue had to make a hasty retreat to the bivvy after a pool of water had collected in her side of Mike’s tent! 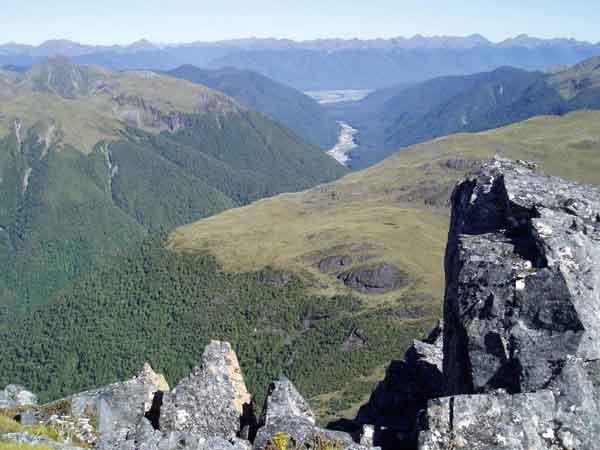 Being "fine weather trampers", we waited until the rain had stopped at 10.00am before setting out on James Broadbent’s route which followed the true right of Lucretia Stream. Two side streams were crossed and at the third we found the marked route up a steep spur to the bush edge. From there on the climb up to the col between points 1602m and 1605m was a joy with a profusion of alpine plants in flower. The three botanists on the trip assumed all sorts of strange postures to take "macro" shots of plants which included gentians, geum, celmesias, ourisias, orchids, eyebrights, anisotome and sundews. Spear grass was in flower but we gave it a wide berth! Our lunch spot was perfect, as we perched on the rocks on the col with our uphill climbing done for the day. From the col it was an easy sidle across scree and tussock slopes to reach a grassy basin with tarns and the little orange two-bunk Brass Monkey bivouac. What a stunning campsite!

Traversing the Lewis Pass tops. We had a wonderful day in the tussock country above the Lewis Pass. We retraced our steps to the col and climbed up to the summit of 1605m. From there it was an enjoyable ridge walk to the summit of Lucretia; this involved some easy rock scrambling managed by everyone. From Lucretia we sidled N to a tarn for lunch before continuing on to our pick of the other tarns with plenty of room for tents nearby. Having made camp early in fine weather, most of us strolled around the basin and up on to the ridge tops to enjoy the views including the upper Maruia Valley below us and the distant peaks of Gloriana and the Faerie Queene. We watched the tiny vehicles on the Lewis highway and enjoyed our lofty alpine and tussock "gardens". Those who had to get up in the night remarked on the clarity of the Milky Way. Less enjoyable was a "weta encounter" in the Ashton’s tent!

With a forecast for very high winds, plans were adjusted again and we opted to move on and out to the Lewis highway and allow the next trip to start a day early. Most of us enjoyed the luxury of hot showers and the Japanese bathhouse followed by an excellent meal at Maruia. We slept the night in Big Blue parked in the adjacent camp ground. 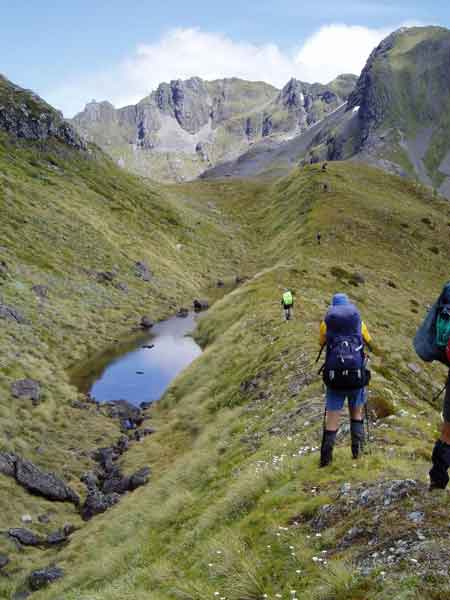 Conclusion. We all walked in to the Cannibal Gorge Hut on the St James walkway before saying farewell to the four who were continuing on towards Nelson Lakes - that will be another story. The rest of us returned to Boyle Lodge and the end of what had been a most enjoyable trip. Many thanks to Noel for his planning and leadership and to Dougal for driving Big Blue. Our bus is a great club asset. She provides transport, storage, somewhere to sleep and somewhere to socialise, and is always a welcome sight at the end of a trip!