Although we choose tramps that should be suitable for winter conditions we still have our fingers crossed - but what luck to have 10 almost rainless June days framed by storms and chains on the Lewis Pass Road the week before and then the road closed by snow the night we were originally due to come out!

We did shorten our trip by a day in response to the approaching weather foregoing the 3 Mile Stream Track, with its dubious track times, on our return from Harper Pass.

It was wonderful to see only a few dozy sandflies, no wasps and few trampers. We had 4 encounters with fellow humans on the St James, sharing the hut on 2 occasions, but saw nobody on our Harper Pass trip.

As the eastern St James Walkway and the Harper Pass track are part of Te Araroa the hut books testified to a very different situation in summer.

Tony’s InReach unit once again proved its worth with access to weather forecasts (thanks Hazel) and allowing us to inform the very amenable Hanmer Tours and Shuttle people of modified pick-up dates and times.

14 June: Our shuttle sped out of the low cloud and damp of Christchurch into open skies. Clouds loomed in the west as we approached the summit of the Lewis Pass Road where we had a drear chilly lunch in the carpark.

From a picturesque tarn reflecting the distant mountains we plunged into moss laden, stunted beech forest although as we dropped to the Maruia River the forest became taller and richer in diversity. It was this river we followed all day crossing early on a sizeable bridge to enter Cannibal Gorge and then on a new bridge just before Cannibal Gorge Hut.

Walking mostly in beech we heard and saw riflemen in the otherwise quiet and as the afternoon progressed we emerged increasingly in small clearings with excellent views of the 2200+ metre peaks of the Spenser Mountains.

We reached Ada Pass Hut before 4.30pm once again under blue sky. With wet firewood Chris and his team took more than 2 hours to establish a steady blaze in a cantankerous stove - much appreciated as the temperature sank under open skies.

15 June: After torchlit breakfast in the old style hut we stepped out at 8am onto heavy frost and the first sunlight colouring the peaks and flecks of cloud. We accompanied the Maruia Stream in the bush up to the Ada Pass sign and so left the West Coast. 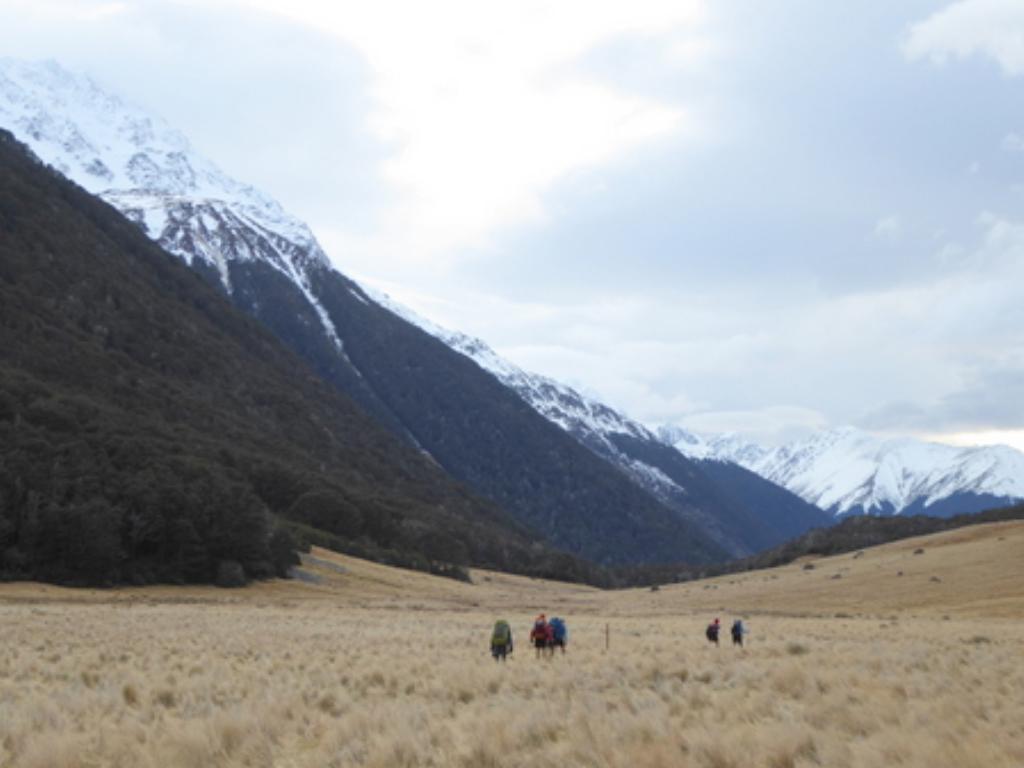 Our progress down the Ada Valley consisted of alternating bush and grassland; with residual snow patches in forest clearings and a heavy dew on the grass, we remained well wrapped for most of the morning.

Robins and tomtits were in evidence today in addition to the Canada geese and paradise shelducks that gathered on pools reflecting the snow mountains that surrounded us. As we approached Christopher Cullers Hut we spied apparently carefree horses on the flats.

The sun emerged as we ate an early lunch at the larger Christopher Hut and clothes were soon shed as we travelled in open country towards the Waiau Valley. Negotiating swampy sections kept us entertained as we made our way up the Henry River and gradually clouds closed over.

Threatening raindrops fell as we approached Anne Hut, splendidly sited against a mountain backdrop, where the trapper we had met earlier stoked a welcoming fire and his horse with no name strolled freely round the hut nibbling the grass.

16 June: Not such a cool start with a cloudy sky but although light rain came and went all morning it was not unpleasant admiring the snow splattered mountains as we traversed largely open grasslands interspersed with beech forest. 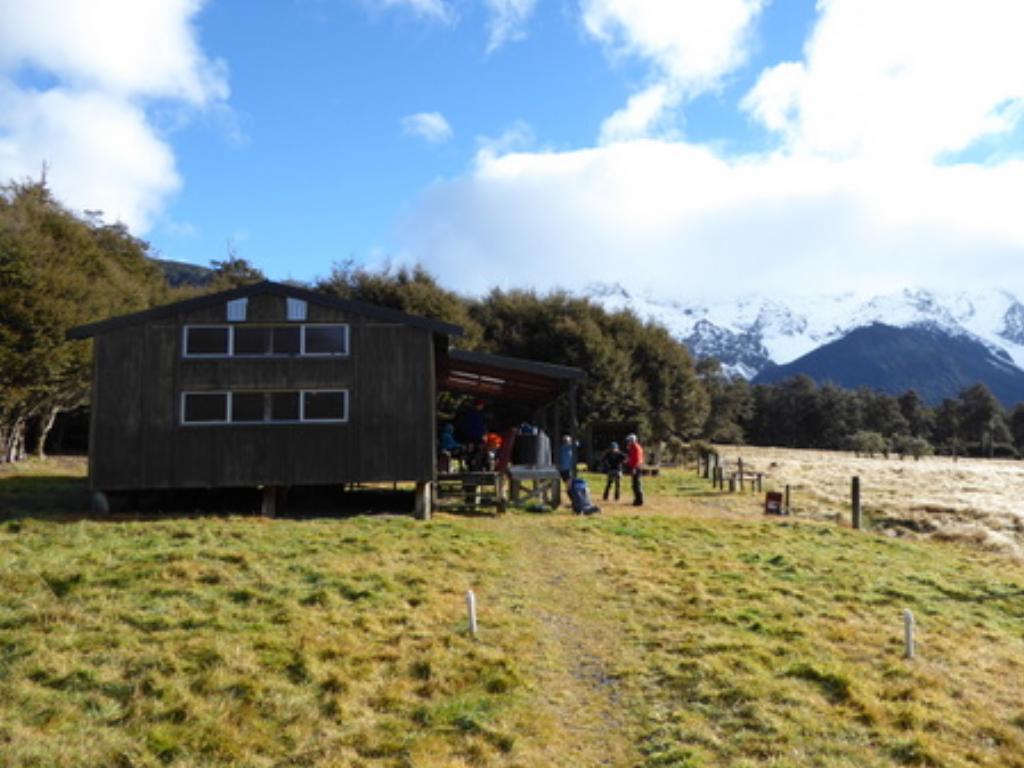 Climbing towards Anne Saddle we passed from red tussock into mossy forest to the sound of a lone bellbird. After a more steeply graded descent we were back on grass terraces with their clumps of matagouri and a small cloud of sandflies assembled as we ate lunch at Rokeby Hut just after 12pm.

The sun shone warmly for the hour to the Boyle Flat Hut swingbridge but rain returned as we were removing our boots a few minutes later.

Despite damp wood Chris soon had had an excellent fire which proved very cheering for a damp party of 5 from Christchurch who arrived later in the afternoon.

Track times: 4ish hrs to Rokeby Hut, 1hr to Boyle Flat swingbridge + 15min for 7 to cross to the hut.

17 June: Threats of rain toyed with us without eventuating throughout the morning. The trail down the Boyle was at first in beech forest and then as the river turned southwest into the Magdalen valley, we walked on the forest margin with wide views across to the Poplars Range in glorious golden light. Some Rakiura-esque mud tested skills gained last winter.

Not long after our third suspension bridge we converged on Boyle village and contentedly made tea and ate lunch in the shelter as we awaited the shuttle. Track time: 4 hrs

The joys of Hanmer Springs included bathing in the hot pools, a fine Indian meal and a cosy night at Kakapo Lodge.

18 June: A fine frosty start with some low-lying wispy mist greeted us at Windy Point. We briskly headed across the swingbridge over the Boyle River to meet the Tui Track and be once again on the Te Araroa trail.

After a section of manuka river terrace we entered beech forest alive with birds - especially bellbirds - and we met several robins.

We lunched at Hope Halfway Hut and soon after a short time in the bush we picked our way alongside the Hope River. Higher broad flats adorned with sweeps of grey matagouri made easier travel to the swingbridge where we farewelled the Hope and turned up the Kiwi River. 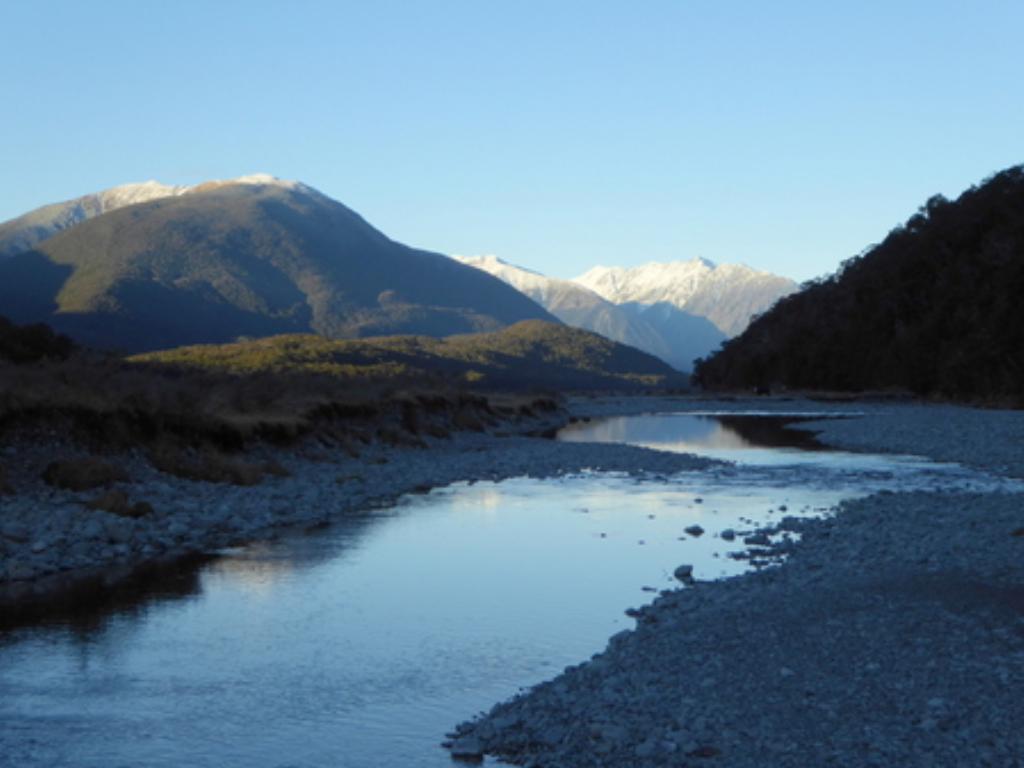 The track snaked up a series of terraces before I mistakenly led us onto the old track and into a chaos of windfalls but we were soon at the spacious Hope Kiwi Lodge back on a vast meadow.

The fire team soon had the stove warming us after a cheerless day of high cloud and light rain began falling in the late afternoon. Overnight strong winds buffeted the hut.

19 June: At 8.30am we set off under a partly cloudy sky with a light dusting of fresh snow on the higher reaches of forest above our grassland trail. It was a short climb through the forest to Kiwi Saddle where we briefly explored the track to Lake Marion hoping for a lake view.

A kilometre later was a lookout track but the vista of Lake Sumner was better for tall people. Bellbirds chorused as we made the prolonged undulating descent to Lake Sumner for a cool midday lunch viewing the mountains across the water.

It was back to the bush but flatter going with the Hurunui River flats visible at the bush edge. Again we found progress blocked by occasional treefall and we marvelled to see statuesque red beech snapped like matchsticks.

We had to traipse well across the open flats towards the Hurunui swingbridge to get beyond the shadow and be warmed by the sun and so, after crossing we all perched together to further defrost before the final quick forest stretch to Hurunui Hut.

Given the Hurunui Mainland Island poster in the hut we were surprised to see possums around the hut and hoped the project was still active.

20 June: The sun shone weakly through gaps in the clouds as we walked the open river banks and bush tracks to Hurunui No 3 Hut.

A soak in the hot pool midway was a pleasure that haunted us as we froze all afternoon in the historic hut stoically deferred lighting the fire until a respectable time. NZ‘s own balaclava clad Ice-us faction maybe?

21 June Winter Solstice: A glorious sunny day but the air remained deeply chill throughout. A 7.50am start with the usual Hurunui mix of grass river terrace and bush walking - often pugged by the resident Hereford cattle - as we strode purposely upriver.

Ironically we kept our feet dry by using the walkwire at the Cameron Stream and soon after came upon tiny Cameron Hut.

Although the river gradient was minimal we upped and downed in the bush until reaching the sub-alpine zone and Harper Pass Bivouac. Now we darted back and forth in the icy headwaters of the Hurunui as we conquered the contour lines and attained the broad pass.

The great expanse of the Taramakau Valley was outlined by a ring of snowy peaks and the mountains about us on the pass bore the previous night’s snow dusting almost down to where we stood.

At 11.30am we turned back downhill and descended quickly through the forest enticed by the promise of sun in an open space - but no sooner had we opened our lunches in a suitable spot than the sun fled. 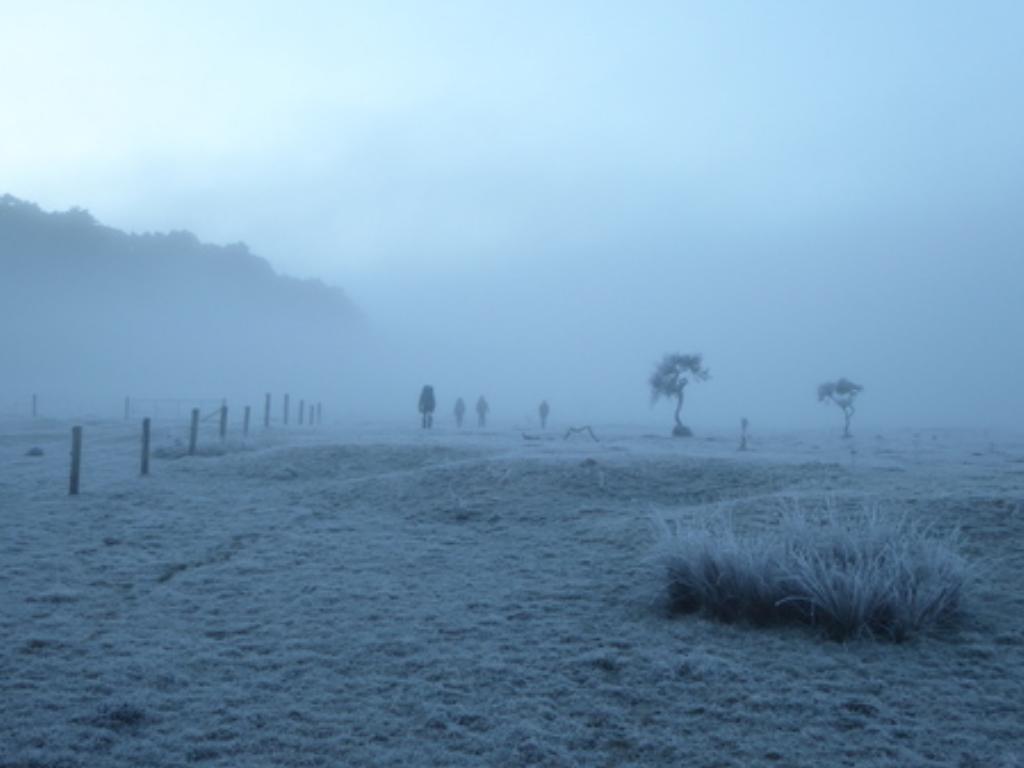 This was the theme of the afternoon and although we travelled on the open river flats, necessitating several numbing river crossings, the shadow largely marched down the valley more speedily than us.

However travel was swifter than the conventional route and we were able to collect our gear in No 3 Hut to continue on to Hurunui Hut. It was a beautiful walk with sparkling white peaks set against the pale blue sky but all were ready to remove their sodden boots at Hurunui Hut at 5.15pm.

Track time: 9hr 25min (for everything)

22 June: At 8am we stepped outside to a white world of frost and mist lifting from the river below. Blue sky but the shade temperature failed to make zero all day.

After crossing the swingbridge we opted to stay on the frost encrusted flats seeing the mountains loom above us out of the swirling fog. At one point the river was pooled against the bank so we deviated up the cliff and bush bashed (in preference to a couple of river crossings) but we were soon back at Lake Sumner at the base of the meandering bush track.

We felt the first sun rays through the trees as we lunched on Kiwi Saddle and later thawed a little as we walked the final grassland stretch to Hope Kiwi Lodge. Nevertheless all shaded grassland areas remained locked in fierce frost and ice continued to crust mud and swamps.

Unluckily much of our walking on to Hope Halfway Hut was in the long shadows with only brief respites and alas no fire for us that night. 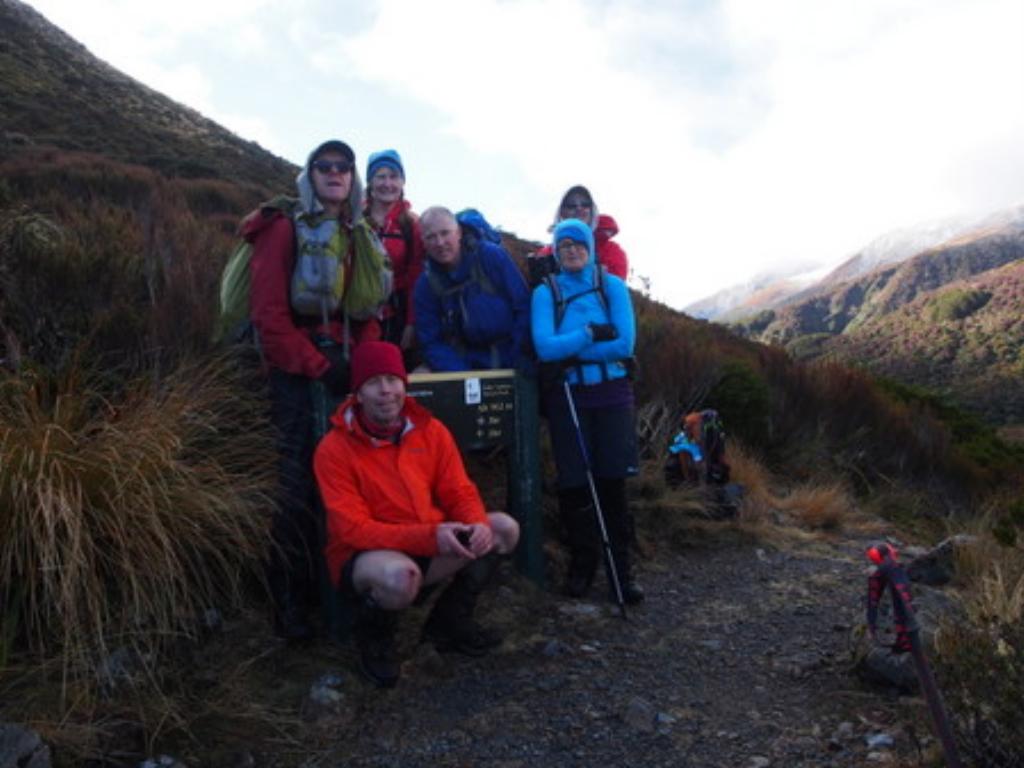 23 June: Another fine and frosty day that, despite some dissenters, most agreed was marginally warmer than the previous day. After all there was no ice on the inside of the windows and the water didn’t freeze in our drink receptacles.