A night at the Dorset Backpackers, situated very central to Christchurch gave us existing trampers the opportunity to fill our tummies with good food, resupply and gather in the new members of our team, Hazel Walton and Martin Woodhead

Day One a 9.00am Akaroa Shuttle bus from outside the ChCh museum dropped us off at Hilltop. A quick photo jostle among all the other tourists of Akaroa Harbour, where Martin had competed in a swim event the day before in chilling weather conditions. Then we were off into the great unknown...

Well in fact, an easy to follow trail led us to our first major stop - an ATC nine person hug with a 2000 year old totara. Totara were on and off our menu for most of the trip along with a continuous supply of spectacular views. Having the local Cantabrians in our party meant we were able to identify all viewpoints. 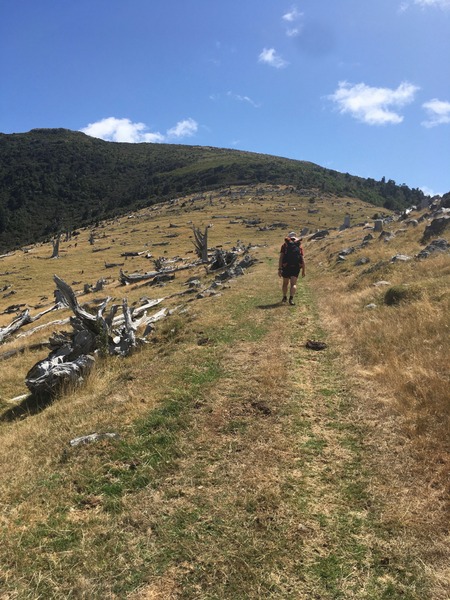 A lunch was had in Montgomery Scenic reserve, providing both spectacular views and more photo-shoots. We then undulated through farmland and a graveyard of weathered bleached stumps that had once been this mighty Totara Forest. The trail was also bordered by ancient hand cut silver totara fence posts and rusty wire that were in various stages of standing or disrepair. The posts often provide the only shelter for wind stunted and sculpted shrubs and trees that huddled from the prevailing gale winds. Small pockets of totara and other natives had been now fenced and preserved.

Over Mt Fitzgerald, across Waipuna Saddle led us to the trail to Rod Donald Hut. It was a steep 20min walk off the trail through a very healthy gorse track. This hut had been restored in memory of the premature death of the Green Party MP Rod Donald who had once privately owned this hut that is now managed by a very capable Trust. The hut provided all the comforts we could have wished for - composting toilets, upstairs downstairs, solar lights and tap water. AND one too many switches that were just too hard to resist for one curious member of our party! 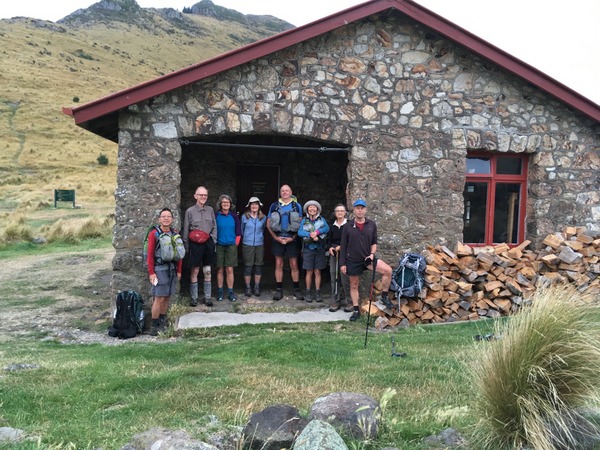 Day Two was a windier day but no less spectacular for views and a fabulous trail to follow. At the beginning of the day, after climbing back up to the trail, we are able to wander through another windswept old Totara forest on private land.

Port Levy Saddle led to a windy viewpoint on Mount Herbert/Te Ahu Patiki summit that was quickly admired and then down to the Shelter for a welcome lunch and cup of tea boil up. A zigzag track sidled Mt Bradley and we knew we were getting close to home when we wandered through a delightful young regenerating horoeka/ lancewood grove. Onward toward the saddle and the beautifully restored historic stone Packhorse Hut that slept the nine of us - rough sawn wooden floors and authentic wooden windows. Views were 360 degrees and encompassed Kaitorete Spit, Lyttelton Harbour, Quail Island and the Port Hills.

A short 5 min walk onward gave us time to stare and contemplate a magnificent view of the Remarkable Dykes - layered volcanic rocks that had been thrust up out of the earth. The starlit night sky was spectacular for toilet seekers, along with the mousetrap having a very active night.

Day Three consisted mainly of a pleasant downhill descent through commercial forestry and farmland, crossing a mix of farm trails, forestry roads and other trails. Steve’s Shuttles arrived on time, 10.30am with a relaxing winding drive down past Governors Bay, over the Cashmere Hills giving us a glimpse of the mountain bike trails, past the road where Tony and Hazel used to live and then onto the airport via the backpackers and our much desired clean smelling reinforcement clothing. 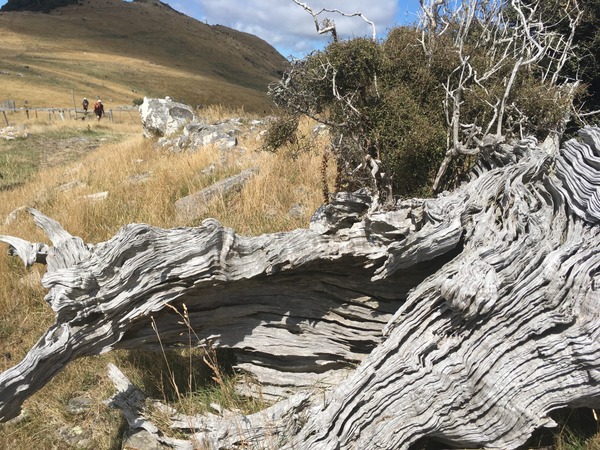