From the comparatively quiet southern Mavora campsite we crossed the handsome swingbridge over the Mararoa River to walk along the western shore of South Mavora Lake. What a contrast the soft carpet of beech leaves and open forest was for Vicky and I to the challenges of the Dusky Track and what a gentle warm-up for Alison, Chris and Don to a week’s tramping. Through the trees we spied the lake’s waters buffeted by wind gusts but also glinting in bursts of sunshine. 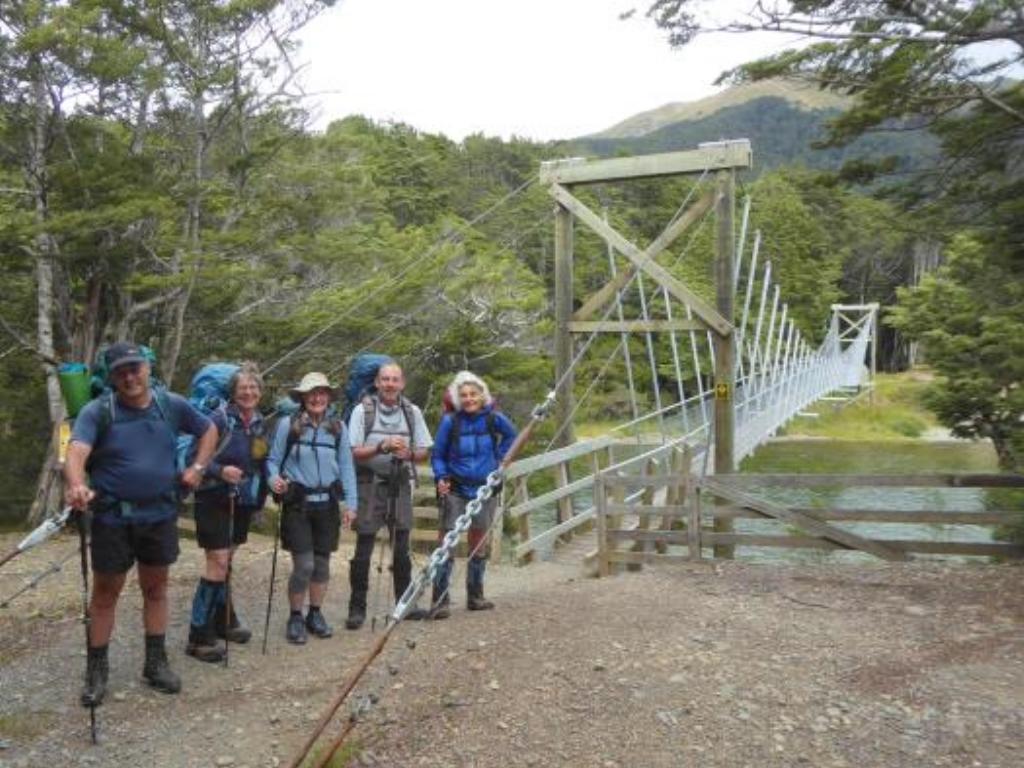 After a traverse of grassy flats we rejoined the Mararoa River and crossed another sturdy swingbridge to the north Mavora campground stretched out along the south-eastern edge of the North Mavora Lake. We lunched in style at a picnic table before setting off along the 4WD that hugged the shore - sometimes beside the wavelets and sometimes in the calm of the beech forest. In less than an hour we climbed up from the lakeside into open country lying between the sun dappled Livingstone and Thomson ranges that enclose the valley. Paradoxically we were alternately assailed with chill wind and wafts of balmy air, and weary of the undulating gravel path we were glad to arrive mid afternoon at Careys Hut back down by the lake. 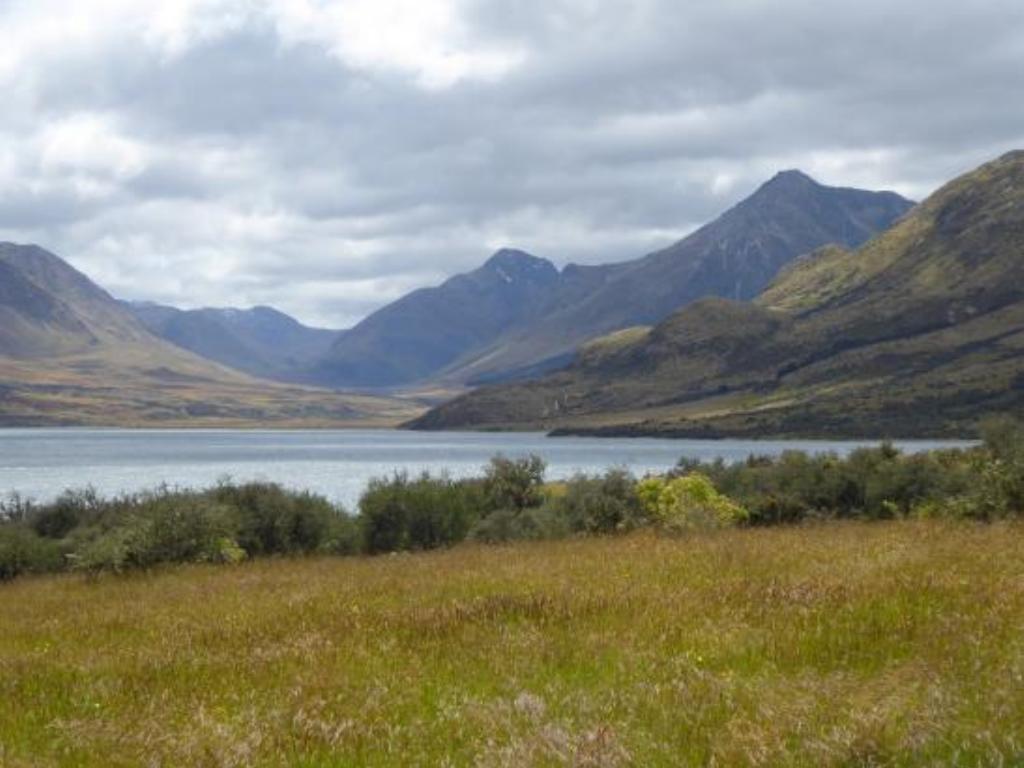 Don demoed his blow-up tent mindful that "blow away" was a possibility in the fretful breeze. Visitors aplenty included 4WDers, a cyclist, hunters, DOC, a superfast Te Araroan and a few more sandflies than we bargained on. However it was not until lights were out and we were beginning to zzz that a young cycling couple arrived to share the hut with us.

This was the promised day of rain. After a solid overnight performance the rain eased to the light level that would continue unabated for most of the day and the lemmings in full rain armour left the hut just before 10am. Continuing on the 4WD track our dry feet of yesterday were soon wet in the vast puddles and surging streamlets but we did not miss the now absent gravel.

We ascended to last views of the lake and travelled north beside the brown, meandering Mararoa river. Tussock, matagouri and the occasional speargrass populated the grassland as we splodged our way to an early lunch in the sanctuary of Boundary Hut and crossed the river at the adjacent swingbridge. 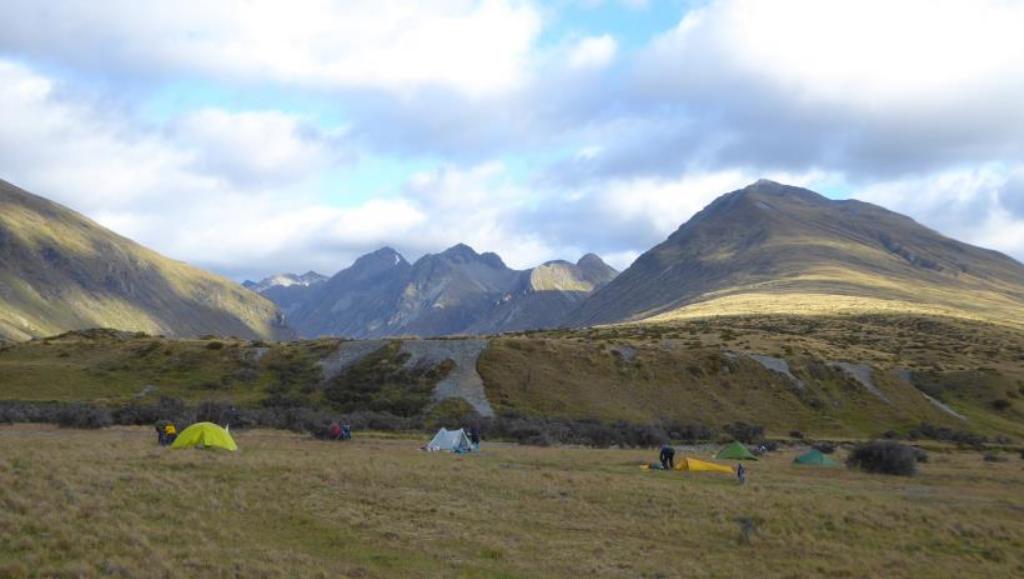 Our tramping track was a very soggy affair as we began a long sidle of a slope flushed with water punctuated by frequent swampy areas but stoically we progressed steadily following the orange poles. Steadily .... until the first challenging river crossing where we made our way downstream to a lesser slope and wider bed, crossed over and then scrambled back upstream to re-find the track markers. Repeat 4 times sometimes diverting a very long way and throw in a team assisted jump of one swift watercourse (after seeking a safe location for this manoeuvre).

However despite the rain having ceased, the last river was not going to be crossed that day - so as the sun shone we erected our tents on pleasant flats in view of Taipo Hut standing like a sentinel above the junction of the flooded river and the Mararoa.

Drying our shorts and rain-trousers while still wearing both of them was the penguin fashion of the evening and after dinner we celebrated Alison’s never to be forgotten birthday with chocolate and port. 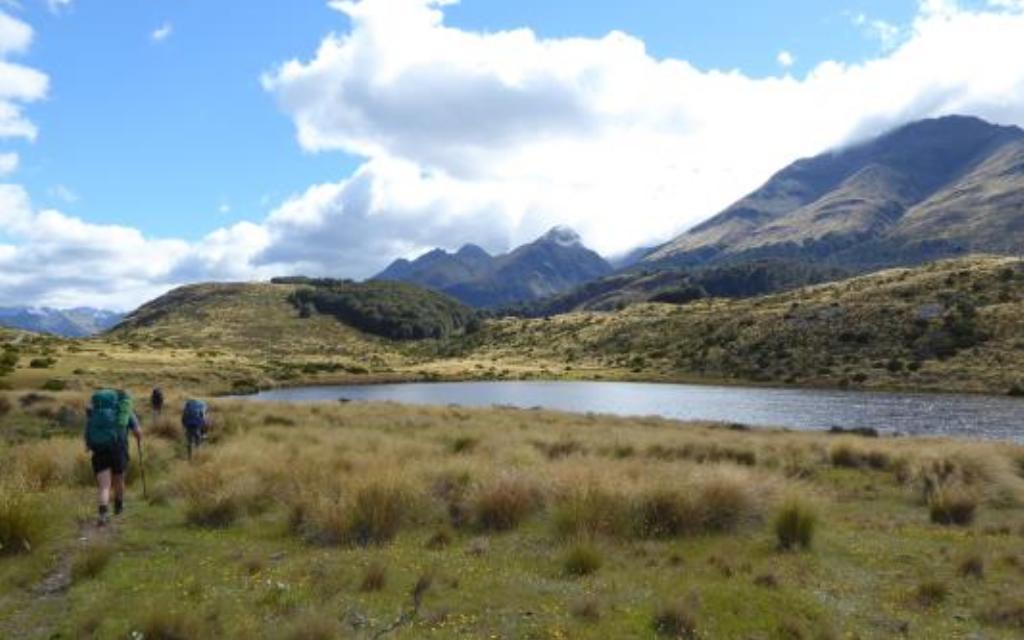 Splish-splash across a much subdued stream and up the bank to the swingbridge over the Mararoa and the deserted hut. Wading through tussocks up the gentle gradient of the Pond Burn Valley, it was still damp underfoot but a dry spot was found for a relaxed break in the sunshine by the prominent "Track" sign south of the upper pool.

After commenting that it was confusing that the old "Walkway" marker posts went in one direction and the new orange marker poles in another, a couple strolled towards us using the poled route so we set off stalking the waratahs up to the saddle passing several reflective tarns. 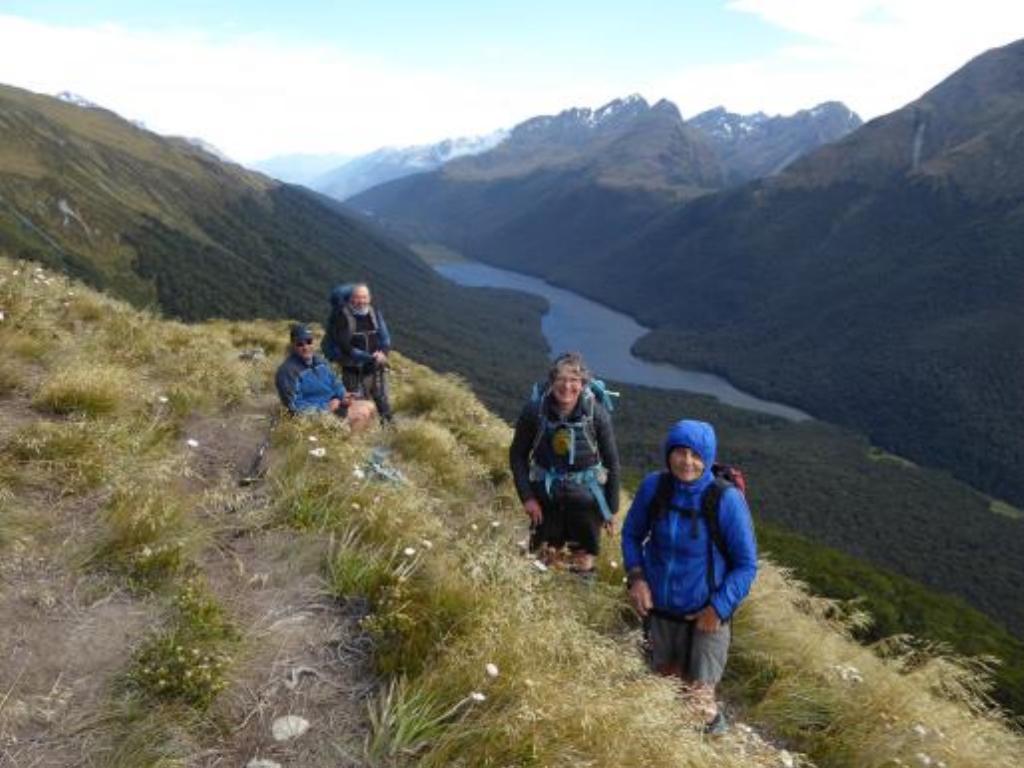 The pass consists of a kilometre plus long flat with two parallel tracks, one on each side elevated above the often boggy floor. Mysteriously we were on the wrong side but as we were enjoying mountain views that the track in the bush on the other side lacked we trundled on until we found a suitable crossing point necessitating only a short bush crash.

The correct track did prove muddy and confining but soon we emerged in a scrubby area for our first sight of the Greenstone Valley. Here we lunched before descending to the bouldery Pass Burn for a shorts-wetting crossing. After more bush and more glimpses of the Greenstone, we were first to the large, new hut which would be soon be overfull with trampers from far and wide.