What a popular mid winter destination - once Christine had formulated plans for her trip, it was full before it was advertised, and with enquiries continuing, what better way to spread the muddy fun than run a second trip in the reverse direction - Tony's party.

So there we were, 8 of us travelling from Auckland to Oban arriving on a Friday afternoon, already a long way from home, in many respects. Great hospitality and food at the South Sea Hotel, including a heaped platter of deep fried savouries. And Stewart Island backpackers was one of the best ever, including very efficient radiators in every room. Confirmed the shuttle pick-up for the next morning ... 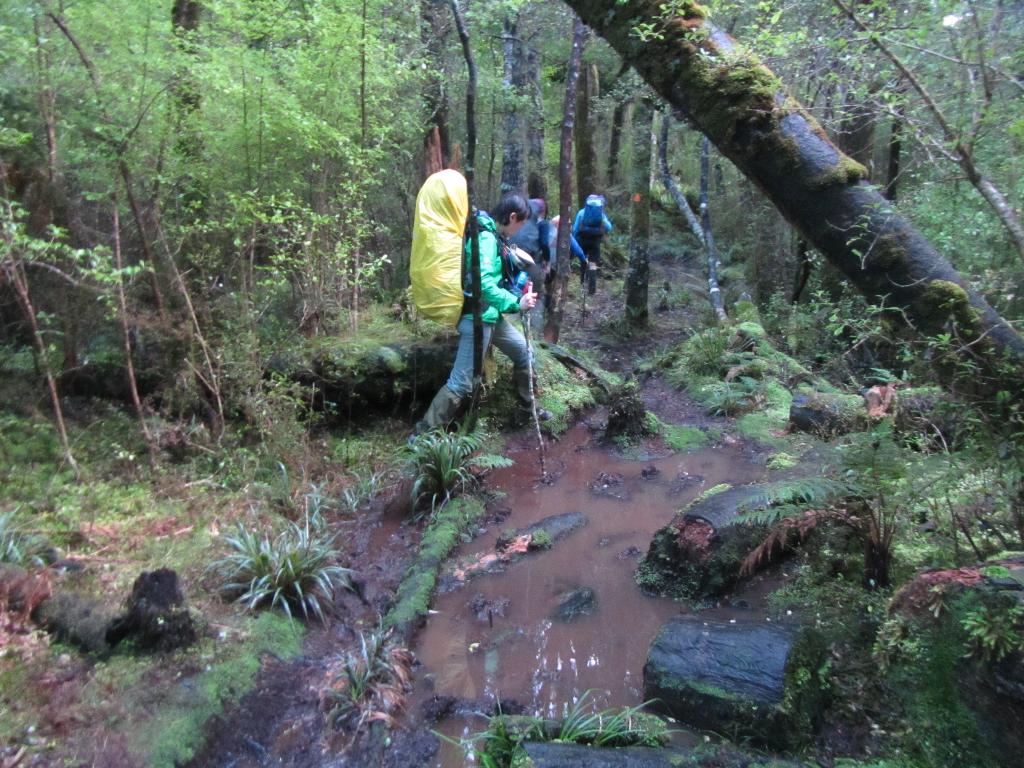 The next morning ... no shuttle.. island time. Bush telegraph aka the backpackers owner being very helpful, soon rustled it up, and we were on our way to the start of the track at Lee Bay. Great weather, easy going, on the Great Walk section to Port William Hut. A sea lion lazing on the sand at Maori Beach near where there is a short side trip to relics of the sawmilling days. . After a short stop at the spacious Port William Hut, it was very quickly onto the real NW Circuit track, with some good mud, and everyone soon learning that they would not be ending the day with clean boots !

After our first bush and mud adventure, a more relaxed stroll along Big Bungaree Beach to the hut, where soon enough our master fire lighter Robin had the hut warming up to counter the cool afternoon and evening sea breezes. Sniega, our hardy Lithuanian, opted to sleep on the deck, and was duly rewarded by the first kiwi spotting of the trip - those in the hut had to be content with hearing the kiwi calls.

Each day saw the track alternating between delightful beaches and then tracks undulating through the bush - with conditions ranging from an easy walking surface through to rough sections with large muddy patches ... but all the time superb bush, Sunday was just that - bush sections then along Murray beach, with a lunch stop at the hunters hut beside the campsite. A very comfortable, well looked after 4 bunk hut too. From there the track follows an old tramway formation on a very gradual ascent, with some assistance to avoid stepping all the time in the continuing mud. Undulations continued, scruffy gullies, then a side track took us to the Christmas Village Hunters Hut down near the see - an interesting assortment of skulls - probably from trampers who had not managed to escape from mud holes. Not much further from there was the side track down onto a rocky beach, and then along the beach to the Christmas Village trampers hut. 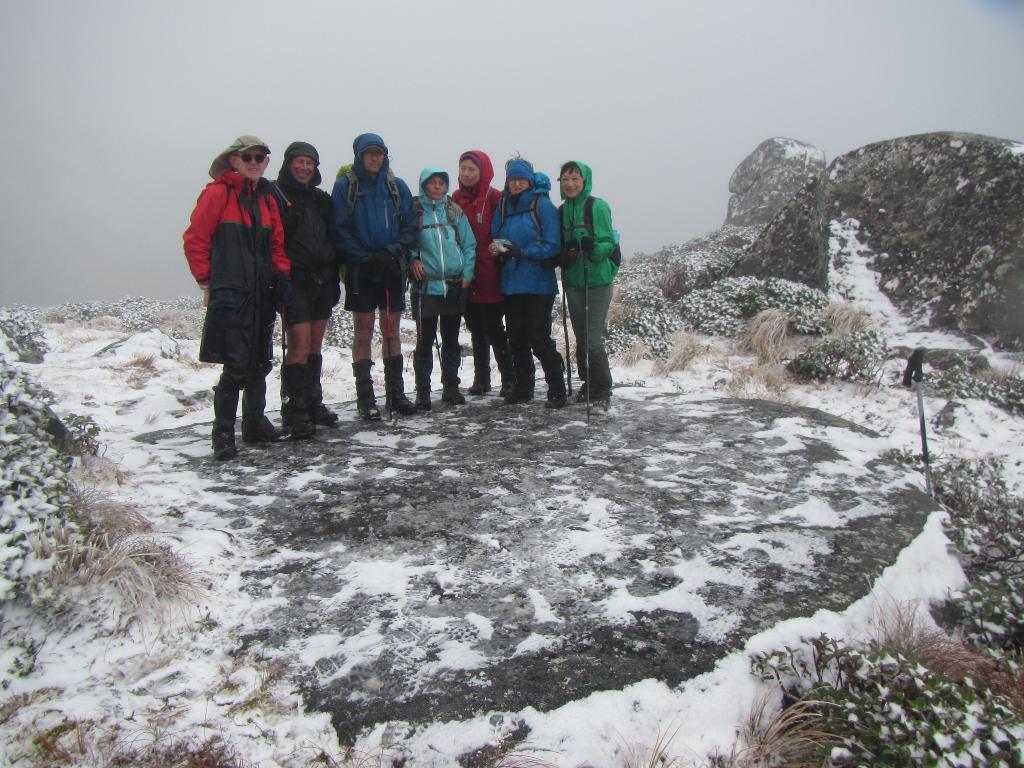 The next day’s feature was the side trip to the top of Mt Anglem 980m and back. A cool morning breeze, so "wait at the first track junction". Ummm ....it took just 5 minutes for the party to find various ways to leave the beach from where we had come the previous afternoon, not all correct ... and so 30 minutes later we were all back together again.... Then a good 3 hour climb on a track with some real bogs - Mark up to his middle at one point, Tony having the odd dabble too. Our surroundings changing as we went - out of the tall trees, into leatherwood, into colourful alpine vegetation, and finally a snowy landscape in cool clag. Noticeably cold at the top, so a quick stop on the helipad for photos, then back down the hill away from the snow to where we could enjoy a relatively sheltered lunch spot surrounded by alpine vegetation, with views up and down the coast and inland. No lake view for us - that was in the claggy area. A slow descent because of the roughness of the track, and Catherine’s pack acquired some dry firewood for the evening rituals - just as well, it was a cold night with the hut directly collecting the sea breezes.

Next day’s progress marked by arrival at Lucky Beach for an extended lunch stop in the warm sun - unappealing camp site - back from the beach, in a shady spot, soft puggy ground. Beach foraging introduced Robin to the joys of paua hunting to supplement his dinner that evening. Masses of kelp and deer prints on the beach. Great bush track for a while, then it reverted to its usual muddy state. Yankee River Hut in a very pleasant location beside a wide river, set back a short distance from the sea, so a more sheltered location than our previous seaside spots. Our night kiwi hunters were not successful - typical of the week - kiwi spottings were unexpected, and deliberate searching was never successful ! 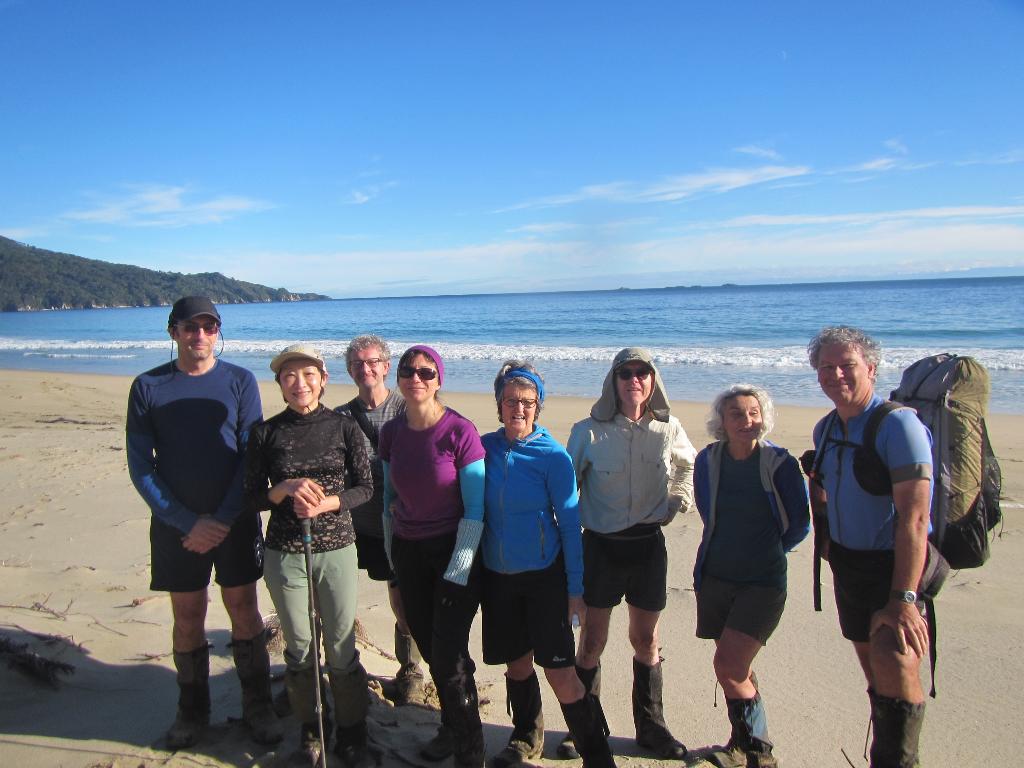 Weather continuing fine - think - mid winter in the very south of the country ! - so next day up and over the hill down to the sand dunes of Smoky Beach and a welcome sunny rendezvous with Christine’s party, and a chance to catch up and share all of our experiences to date. Found out that we were the incendiarists party and they weren’t, but later on they eventually succumbed - we must have corrupted their moral fortitude ! On along the beach and then over the next hill to Long Harry Hut perched on a high point above the beach - cellphone reception was a bonus. A dead seal pup on the beach, a cave with a sea tunnel, and Mark spotted a kiwi on the track coming down to the hut.

Next day more kiwi spotting along the way and then down onto a long rocky beach, with a bit of quick footwork required to avoid waves from the incoming tide at one point. Up onto the next headland and now turning the corner from a generally NE direction to a southerly one. Descent down to the stream near East Ruggedy Beach, with no one managing to find the possible quicksand. A few squalls about as we climbed away from the beach on sandy tracks to East Ruggedy Hut - aka The Ritz. Well provisioned with essential provisions such as 5 ply toilet paper and even magazines - but don’t tell DOC (the magazine removers) about them.

Friday again - over a saddle via easy an gradient and down through the sand dunes to West Ruggedy beach right on high tide - so followed the marked high tide route over a small bluff. Walking down the beach the sky to the west over Codfish Island was a dramatically dark stormy blue, increasing in intensity as it headed towards us - must get off the beach asap and into the shelter of the bush. Amazingly although we did get showered on from time to time, the threatened dumping of rain did not eventuate. The bush track wound its way on through some great rough and muddy spots, gradually ascending to the point where having crossed the top of sand dune slope at 200m elevation above Big Hellfire Beach we arrived at the hut. This time a different outlook - the hazy views were eastwards into the middle of the island, not out to the western sea.

The final day’s tramp involved a lot of rough mud and a track with some great H&S risks to life and limb (Oops - I forgot to bring my DOC H&S plan - this was much more of a hazard than anything in the Kaimais). Soon enough we had views out to Mason Bay in the distance, so we knew we were reaching our journey’s end. Spectacular surf with high spray as the waves broke at Little Hellfire Beach, and then our final headland up, up, up and over down, down, down to the top end of Mason Bay. Impressive sand dunes, and now a flat beach walk through to our final hut, 20 minutes back from the beach up Duck Creek. Two little aircraft popped in further down the beach at one point - in all of our time on the track, the only people activity seen were Christine’s party and those 2 planes. At the turnoff inland to the hut, evidence of rubbish collection work - the west facing beaches were so disappointing for the amount of rubbish about (principally fishing related), just so different from the pristine NE facing beaches from a few days ago.

Our final day on the island required a late afternoon low tide departure via a 9 seater plane from the beach, so time to explore the old homestead area, a couple more hunters huts, and in some cases find an interesting round walk over Big Sand Pass with its extensive sand dunes back onto the beach. Time in the afternoon near our pickup point to check out another hunters hut, fill supplied heli bags with beach rubbish, and wait while watching squally conditions not too far away that never quite managed to reach our spot. A spectacular flight back to Invercargill not too far above a number of the beaches and headlands we had walked over the last few days. 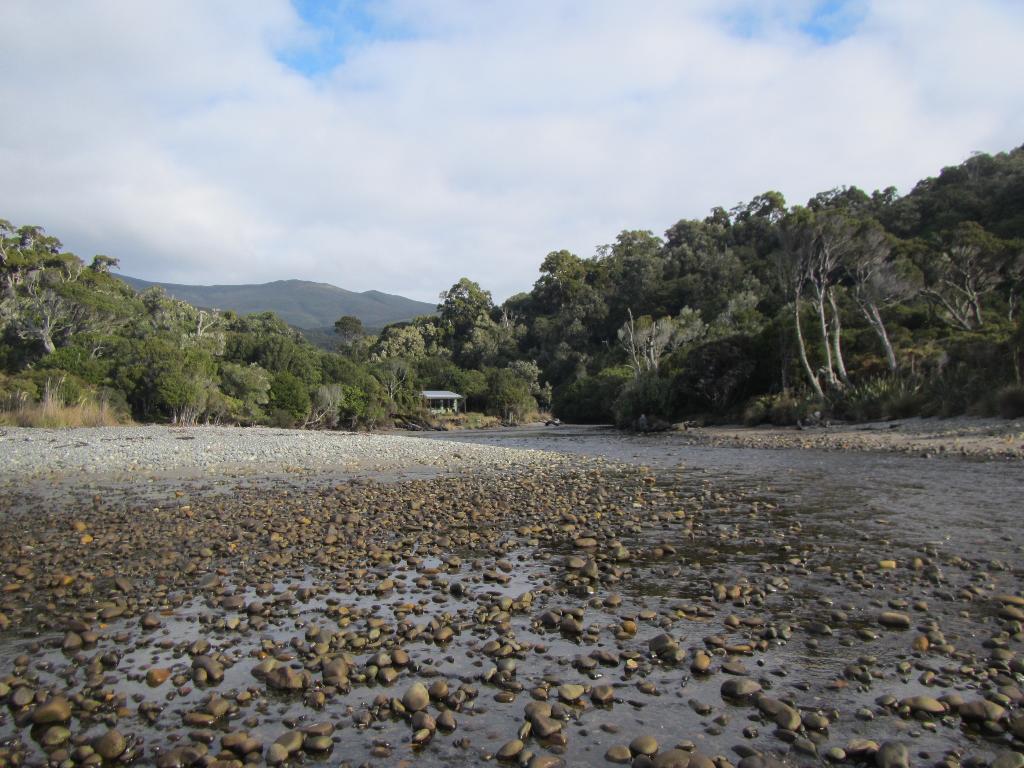 Most impressive - all arrived at Mason Bay safely - thanks everyone !

Notable track markers near beaches - washed ashore fishing buoys, some with faces cut in them. The whole party each day was walking close to DOC standard track times, meaning the faster members were capable of being under those times.