“Home to Tuhoe and the largest National Park in the North Island - rugged, remote country!”

Our adventure began with a prompt 7 pm departure from the club garage and an 11 pm (ish) arrival at Kohutopu Lodge, overlooking Lake Aniwhenua on the Galatea Road. It was a real treat to have the use of the bathrooms, and the view of the lake for breakfast.

Shortly after, we dropped the Fit group off, well up the Galatea Road, the medium halfway up, and our Easy/Hard Group back down the road, where we chatted to a super friendly farmer and his dogs before following the track up beside the Ohutu Stream to begin our planned 6½ -7 hour walk to Duckville Hut. 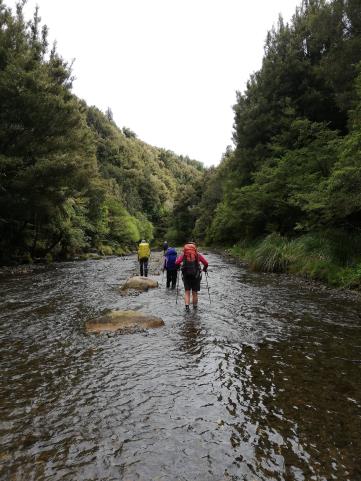 It was a lovely day and we had smoko beside the stream before a steep climb on loose, shingly stuff to avoid an impassable waterfall. Once that climb was over it was time for a relaxing lunch beside the stream, before continuing on to a hunter's fly camp opposite a side stream where we picked up the track over the ridge. Ian told us to take extra water, just in case, and then we started a long, slow ascent in the heat. The track was marked but it had hardly been used in 20 years. There were wonderful trees, but also lots of pushing through the vegetation, track finding, and a constant, steady climb.

By 4.30 it was obvious that we were tiring and it was still 2½ hours to Duckville Hut. Ian pointed out a low saddle where we could camp and said that we would need to pool water. Unfortunately, despite his earlier warning most of us had little left as, tiredly, we found spaces for the tents. I was dehydrated so quickly retired to mine to vomit! Keith, however, made better use of his time by finding a possible source of water and 3 of the group climbed the steep 100 metres down and back to save the day.

It was a much more cheerful crew when I awoke in the morning, feeling fine, and assuring Ian that we didn't need to turn back. Re-energised, we set off for Duckville Hut via a steep and tricky climb into the Te Weramata Stream. Once we were finally down, the track improved, and 2½ hours after leaving camp we were at Duckville, a cute little 4 bunker set in a picturesque clearing. 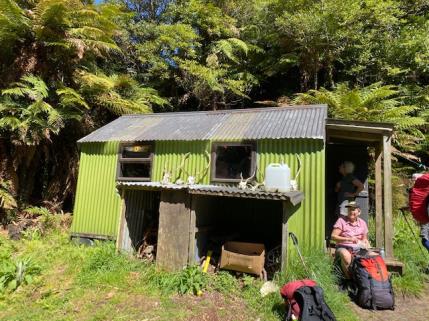 We continued on down the stream and nearing mid-day met up with the Fit group, and exchanged track information etc with them. We then had a glorious afternoon following first the Te Weremata Stream, and then the Mangamoko, before staying the night in Mangamoko Hut, a steep 5 minute climb up the hill. It was an 8-9 hour day and we had done well to have made up the lost time.

Both Duckville and Mangamoko huts seem to be used almost exclusively by hunters, with banana boxes of provisions that they had helicoptered in and lots of references in the hut books to walking out with loads of meat and fur. 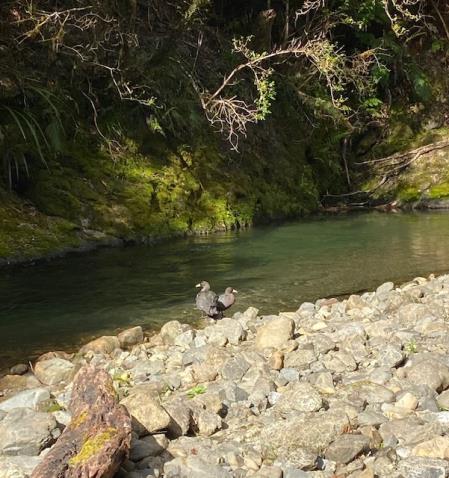 The next morning we waded down the Mangamoko and had a wonderful time loitering, watching 2 pairs of blue duck which were delightfully oblivious to us. Once we reached the confluence with the Karihoto Stream we had a break, then less than an hour's climb to the bush edge before making our way through a confusing maze of forestry roads to a high point with a telecommunications tower for lunch.

We reached the Galatea Road in an easy 4 hours and then had a long wait for the Fit group, which was lucky, as we avoided the holiday weekend traffic coming home. 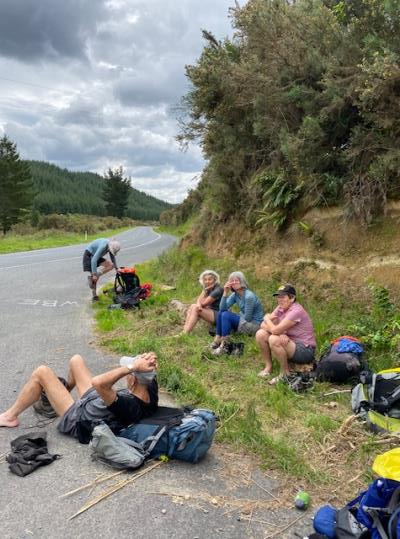 It was a trip that progressed from pretty bad, what with being sick and initially having a dry camp, to pretty marvellous. Walking down the streams, seeing the whio, the glorious weather, and our terrific team were all trip highlights. It was interesting to see how Ian's skills with his map and compass, taking GPS readings, and counting every side stream, were complemented by the topo GPS downloads on the other trampers’ phones. We were very grateful for his leadership, and the navigation and searching for markers on the ridge, undertaken by both Ian and Keith.

Also thanks to Margaret for putting the trip together. She was a bit afraid that there wouldn't be any challenges in it for us!!