If you despair of the paucity of multiday tramps within a short distance of Auckland, here is an account of our traverse of the Kaimai Range.

Midday on Friday. Having planned for a 5 day trip in view of limited hut and camping opportunities, we smiled warily at the 7 day time to Karangahake posted on the North South Track sign tucked into the bush on the summit of the Kaimai Highway 29. Travel was remarkably flat after a brief initial climb with many long straight stretches on the easy track which had me wondering whether I was really walking on a volcanic range. We broke into bright sunshine at the sole Waikato outlook, at Hurunui Hut and traversing a few grassy patches but spent most of the day in the dappled bush. 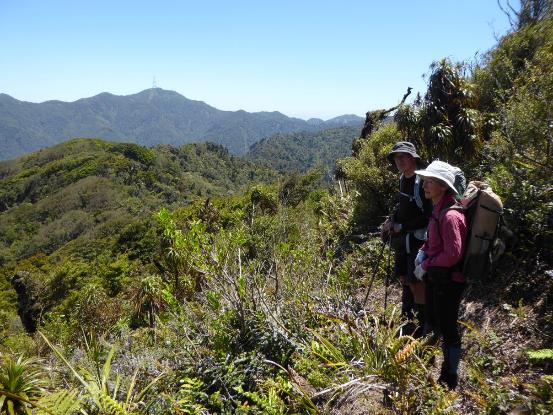 It remains mysterious as to how a responsible group travelling together managed to lose one of the party when the 3 in front ducked into the viewpoint track while the 4th walked on. After a bit of going forwards and then backwards we established all was well using texts and were re-united at the brand new Te Whare Okioki sometime around 5.30pm. A party of 3 women from Hamilton joined us later in the evening.

Saturday dawned misty and the gloom continued until midday. Again we enjoyed a pleasant trail leading us through the soft greens of tawa forest to Wairere Stream where we deviated to view the wide expanse of water churn over Wairere Falls and to look out upon the Waikato pastureland. Lunching at upper Wairere Falls we were now seeking shelter from the sun and the temperature rose as we continued on. As we passed over the saddle that brought us into the catchment of the Aongatete River we speculated as to where the start was of the old North South route that led directly to Kauritatahi Hut up a precipitous slope to a swamp reminiscent of Table Mountain. On our descent the track became rougher with treefalls and logs across the track to negotiate and we enjoyed resting on a broad rocky expanse bordering the Aongatete river. After a climb over into the next valley and incidentally passing over the Kaimai Railway Tunnel, heaven awaited us at the idyllic campsite beside the cooling water on the Poupou stream. We arrived more than 7 hours after we had set off in the morning. 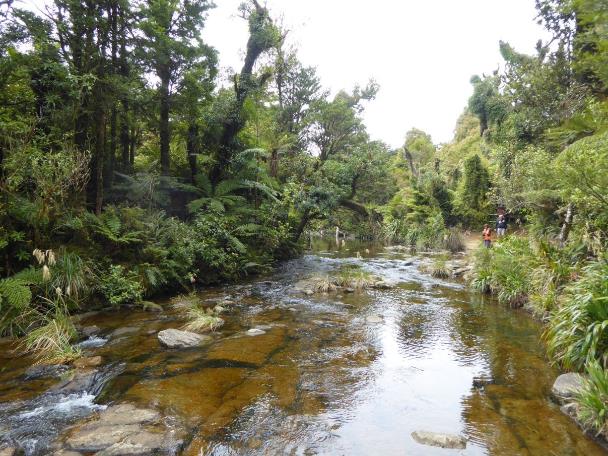 Sunday we continued on the North South Track crossing first an unnamed stream valley before encountering the bouldery Kauritatahi Stream. There were several sharp ups and downs in our progress to regain the Kaimai ridgeline but many were ameliorated greatly by novel “log ladders” (there is a technical but less descriptive term for these). On the section after the junction to Kauritatahi Hut and Motutapere Hut we met a young Kaimai traverser heading south but intending to take the old route - we wished him well after mentioning the challenging features of this option. The track undulated north and we became aware of the rising wind in the open areas near the Thompsons Track intersection. Sunshine at Motutapere Hut for lunch preceded the delights of the ridge as we negotiated our way along the spectacular volcanic pinnacles with views out to both west and east despite some lingering mist. A couple of strategically placed ladders featured in this section. After the Tuahu junction it was just a plod through the forest gradually up to Te Rereatukahia Hut, welcome after a day considerably longer than the 7 hour suggested time.

Loaded up with water on Monday we walked out of the fog enveloping the hut to the summit of Baldy and a panorama of peaks protruding above a sea of cloud. Ethereal views of the Bay of Plenty materialized as the mist swirled. Before long the eastern coastline was clear although it was much later in the day that the shroud below us lifted from the Waikato. This was another day of spectacular crags, like the famed Wahine Rock, varied vegetation and undulating travel but all wearying in the heat.

Someone had scratched “6” above the frankly inconceivable “3.5 hours” time to Te Aroha on the sign where the old North South track meets the Cashmore Clearing Track - the old North South Track was well marked but much is rough and up and down. We utilized a small work party campsite for lunch thinking we were making good progress and the positivity continued when we met the motorway Waipapa Track after the scruffy Waiorongamai section. After swiftly gaining the Te Aroha Link junction we were downcast to read the “1hr 35min” timing to Mangakino Shelter which was nearly what it took us to travel down the twisting, much slower tracks to the campsite. A more than 9 hour day behind us, we pitched our tents in an area marred by rubbish and rodents although cheered by bird visitors and song.

After a little night rain, Tuesday was humid. The array of climb-over-or-under logs of the Mangakino Pack Track ceased after the junction with the Daly’s Clearing Track and the walking became very pleasant in the mature forest. We passed brand new sections of track engineered to protect some fine kauri before steeply dropping to the confluence of the Mangakino Stream and the Waitawheta River at which Murray led us to a 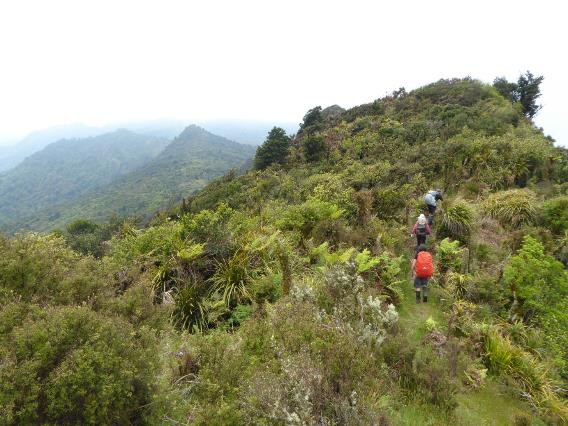 beautiful vantage point after crossing the stream. The track continues largely beside the Waitawheta River alongside stunning stands of kauri with much recent track work to protect the trees from kauri dieback. After a lunch break at busy Dickey Flat we followed the Waitawheta Pipeline Walk, with a couple taking the historic Windows Walk option, to complete our traverse at Karangahake. A 7.25 hour day and gratefully we were met by Ewen, Jane’s husband who transported us back to their home and Kathy’s car for the Aucklanders’ return.

An excellent and varied tramp but a 5 day trip is not for the faint-hearted. Only the first day was under 7 hours. We had excellent conditions – although the heat was tiring – but I could imagine progress being much more slow and slippery in wet conditions.

The Kaimai Ridgeway Trust has done a brilliant job of improving and maintaining a track that we were well aware of as subject to frequent damage. Murray and Jane who have helped regularly with this project were in our party – and Murray merits special mention for his continual place in the lead man-handling fresh windfalls out of the way with tireless enthusiasm. 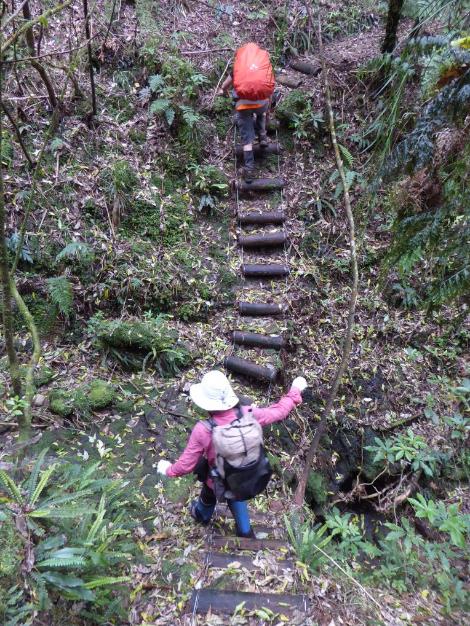 Lastly a huge thank-you to Tony who has done so much both on the ground and “behind the scenes” in the track work and the construction of the Te Whare Okioki. It would have been great if you could have joined us and your track notes were much appreciated.