Simon and I started our tramp an hour or so behind the others as we first had to drop off supplies at the Canterbury Tramping Club Lodge for the second week. Once Hazel had delivered us back to Bealey Bridge and we were underway, the first unusual thing I noticed was all the mice around - I must have seen half a dozen mice on the track within the first hour of tramping. Apparently, it was the biggest mice plague in five years due to heavy Beech tree masting earlier in the year. I was also surprised just how hard it was to follow the tracked as it exited & re-entered the bush. We ended up just following the river. 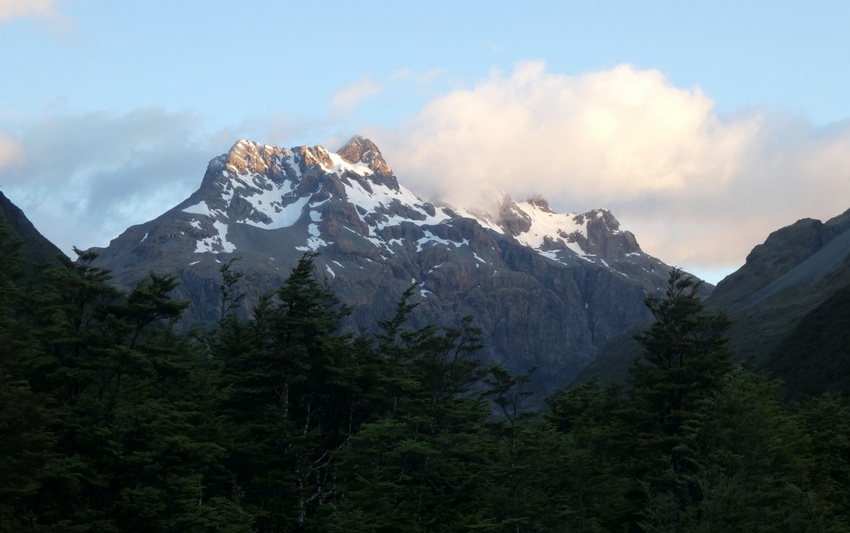 After heavy rain during the night, we were nervous of the water levels in the rivers as we set off. Doc recommended not proceeding further if you can’t cross the White River at the Clough Cableway as crossings upstream were likely to be impassable. The river crossing was not difficult and we could see sunshine on the hilltops, so it was looking good weather-wise. The climb up the Taipoiti River to Harman Pass was a moderate grade with just a short steep climb at the end. Arriving at the pass at 9:30am in sunny conditions, we found shelter from the cold wind on the leeward side for morning tea. Ahead we could see the snow field leading up to Whitehorn Pass with clear blue sky above and the excitement began to grow. After passing Ariel Tarns, we reached the snow field where we put on our microspikes and then after a brief instruction in self-arresting we were off up the glacier. It was mid-morning and the snow’s thin crust broke under our weight as we plodded up the glacier’s gentle slope. Every so often loose rocks would tumble down from the surrounding mountainside landing on the edges of the snow field. We had definitely made the right decision to bring microspikes and axes as it allowed us to walk up the center of the glacier, away from these falling rocks. We arrived at the pass at 12 – it was an ideal spot to take in the views while having lunch. Over the pass, it was mostly rock and so the spikes and axes were stashed away and we began our descent. We had not gone far when we came to a rather steep ice slope that we had to cross. I told Simon to proceed by cutting steps and I followed improving on the steps as I went. This worked well initially, but as the ice cover thinned and cutting steps became harder, causing some difficulty for Christine who followed. Kathy and Selina refitted their microspikes due to Christine’s difficulties and so had a much easier crossing. The rest of the descent down to Park Morpeth hut was straightforward, arriving at 4:30pm. 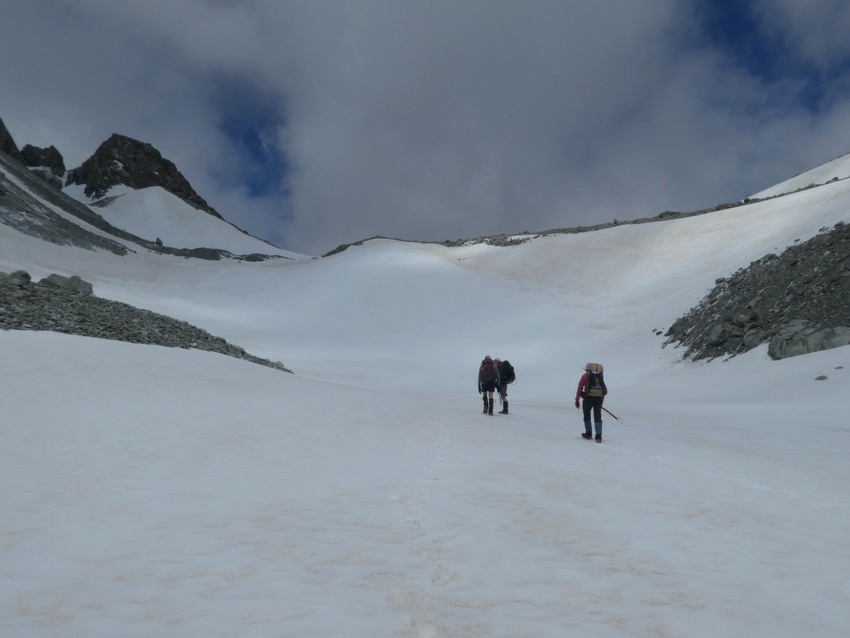 Kathy who chose to tent had a somewhat restless night after being visited by a big bushy possum looking for food and warmth! Warmth wasn’t to be had but, come morning, Kathy found a bag of nuts had vanished. We travelled up the Wilberforce River a short distance to the start of the climb to Browning Pass, passing the Clough Memorial on the way. (James Park and John Morpeth drowned in the river in 1929, prompting the Canterbury Mountaineering Club members to build a memorial hut in the valley. Some 27 years later, 16-year-old Allan Clough drowned while fording the Wilberforce on a CMC trip.) It’s a steady zigzag climb up a steep snow grass slope to Browning Pass with a very steep rock scrabble at the top - not a slope you would want to climb down. We arrived at the top at 10am, so we stopped for a while to fully take in the wonderful views of the Wilberforce River below and the surrounding snowy mountaintops. Continuing on, we passed beautiful Lake Browning and down the valley to Harman Hut, arriving at 1:30pm. 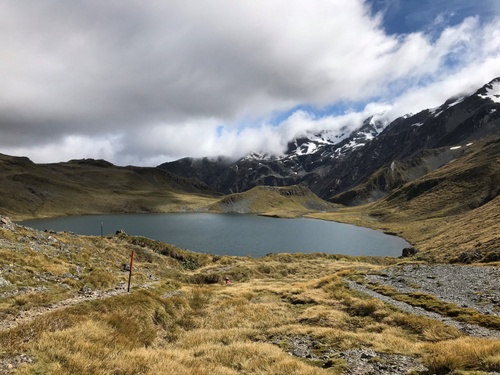 It was an easy day for us trekking down river, across the Harman River swing bridge and down to the Arahura River. The traditional 3 Passes trip exits via the Styx River, but our plan was to return to Kelly Range Carpark which is a more convenient place for Hazel to pick us up from than Arthur’s Pass. (The Styx Valley track also happened to be closed due to a major landslide.) The benched track alongside the Arahura River was constructed during the gold mining era and makes for very easy going. We arrived at Mudflats Hut at 11:45am in time for lunch and a relaxing afternoon of cards. 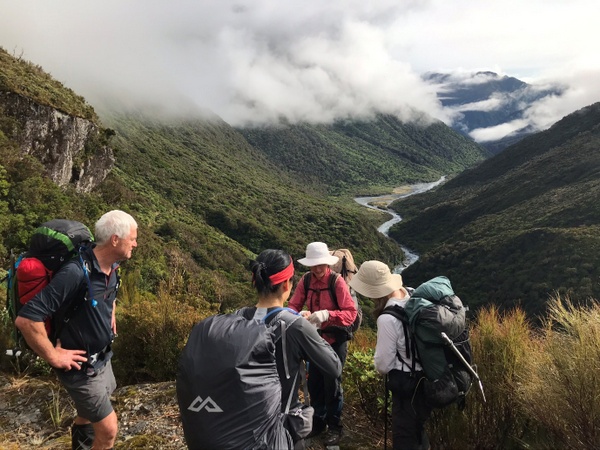 More benched track took us down to where a swing bridge crossing the Arahura River, then a small distance upstream to a bush track running up the true right of Newton Creek. A short distance up, we arrived at Newton Creek Hut at 10am - a recently restored four bunk hut with plenty of good camping. (In retrospect, we really should have stayed here on day 4.) From here, we were walking predominantly in a rocky creek bed. Newton’s Saddle was clouded in, resulting in some confusion as to which way to proceed. Our GPS showed the way as being straight down the other side of the pass, but there were a couple of marker poles going in the opposite direction to our planned route. We elected to follow the GPS, which lead to a very steep and difficult descent to Dunn’s Creek. We later learned that the two poles lead to a similar descent to the creek, so it didn’t really make much difference. We arrived at Dunn’s Creek Hut at 5:45pm and, as there was still plenty of daylight, decided to continue onto our planned destination, arriving at Mid Taipo Hut at 9:10pm. (The route down was a very steep dry river bed - not a nice bush track as hoped for.) 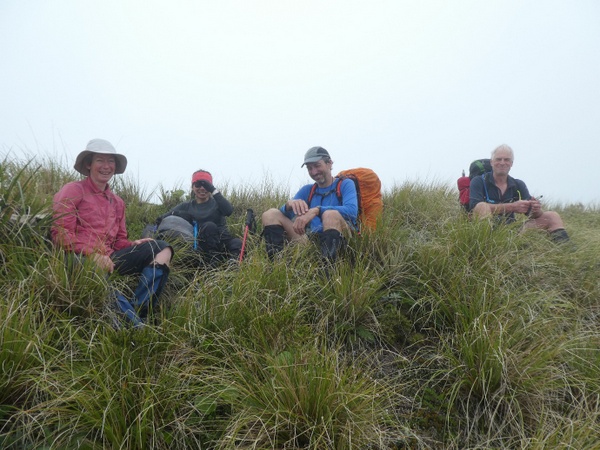 Carroll Hut was not our planned route out, but as no one felt like another river bed climb after Newton Creek, Hunts Creek Hut no longer appeared desirable. The trip down the Taipo River was much easier and the recently installed three-wire bridge replacing the cableway across the river was a breeze. The 1000m climb up to Kelly Range top was particularly difficult for Selina who was still suffering from a fall the day before, but we eventually got there. Fortunately the good weather on this trip had not deserted us, making the walk along the top and over the saddle to Carroll Hut very pleasant, arriving at 6:40pm.

The track down from Carroll Hut to the carpark was steep but not as bad as I remembered it from 2017 when I walked up it. We arrived at the carpark after 1 hour 30 min to find Hazel with the van waiting to give us a lift back to Arthur’s Pass just as the rain arrived. 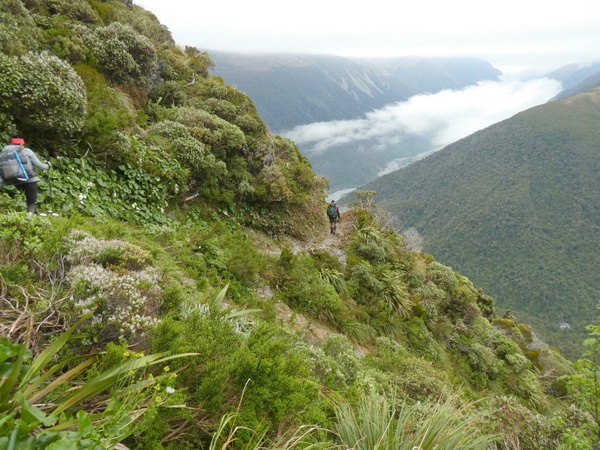