After a night out in Arthur’s Pass at the Wobbly Kea Cafe, we were resupplied and ready to go again with a fresh team of eager 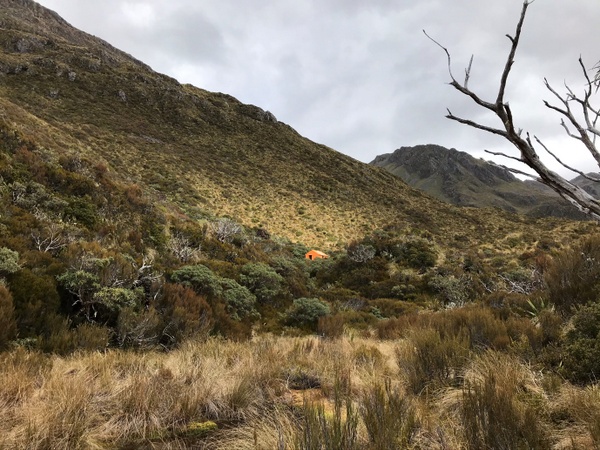 adventurers.  Hazel dropped us off at Aickens and we crossed the Otira River to commence our walk up the Taramakau Valley. After checking in on Kiwi Hut we stopped for lunch at the start of the track leading up to Townsend Hut. The track up was a rock scramble initially in the heat of midday, so it was with relief when it entered the coolness of the bush. It was a steep climb of 700m to the hut, arriving at 2:45pm. After dropping our packs, we continued on up a poled route to pt 1183 to take in the views and see what our path would be like tomorrow. The views down the Taramakau River and surrounding mountains were well worth the climb, but there were no more poles past this point and the way through the surrounding scrub and up to the tops looked uncertain. So while the others returned to the hut, I decided to do some reconnaissance to find the easiest way up because tomorrow, with heavy packs on, it would not be so easy. After an hour’s climb, I came to a grassy ledge which appeared to slope up to the ridge line and so, satisfied, returned to the hut to advise the others. 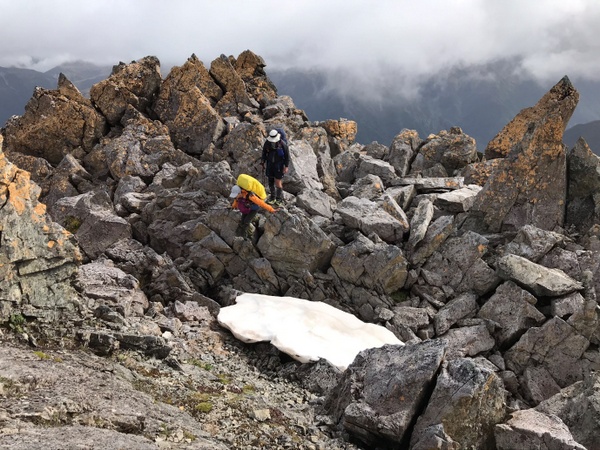 Confident in our route, I led the group up to where I had got to the day before and along the grassy ridge which unfortunately stopped well short of the ridge line. Ahead lay a large scree slope which led up to some alpine mosses and finally a bit of a rock climb to the top. We followed the rocky ridge line along to pt 1731 and then dropped down the south side of pt 1796. There were some icy slopes and bluffs to negotiate, but once past these it was a fairly easy run along the tops and down to Minchin Pass. Minchin Bivouac must be one of the smallest I’ve seen. The marked track following the river downstream from the bivy was so overgrown that we quickly abandoned it in favor of the river. Lake Minchin has a cascade of three waterfalls of around 60m each flowing into it making for a very impressive backdrop to the lake itself. The bush track from the lake to Poulter Hut was a carpet of leaves making a very relaxing end to a rather demanding but rewarding day.

Unfortunately Aaron’s shoes had not survived the scree slopes of the previous day and were only now being held together by gear tape. 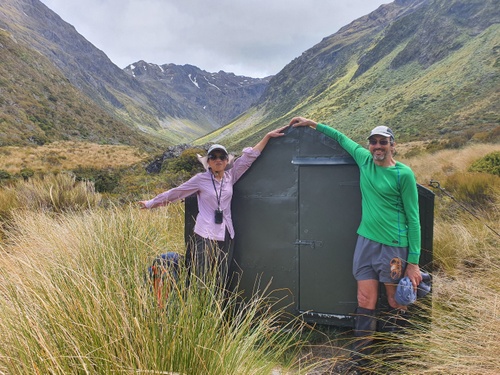 Along with an unfavorable weather forecast, it was decided to bale to Andrews Shelter via the Poulter & Andrews valleys rather than go high again around Mt Valiant to East Hawdon Bivouac as originally planned. The trip down the Poulter River and Andrews Valley was easy going, arriving at the shelter at 3:45pm. 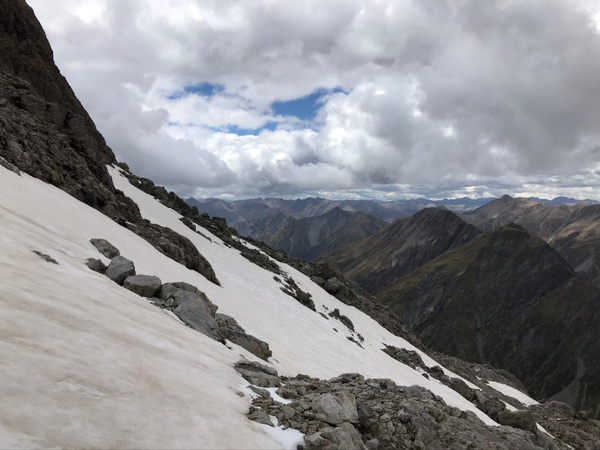 Aaron could not continue with his damaged shoes any longer so would hitch a lift back Arthur’s Pass Village to collect his gear and return to Auckland. Fay and I would continue the trip as planned. A short road bash followed by some cross country around a farm had us at Hawdon Shelter within an hour. Our tramp up the Hawdon River was into a strong headwind which died away as we entered the cover of trees, arriving at Hawdon Hut at 12:00 noon. After 11 days on the go, I thought I might have the afternoon off while Fay (on day 4) went exploring.

Over the mountains to Lake Mavis

We departed Hawdon Hut at 7am, but I was a little uncertain of our destination as I had strained my foot on day 3 and was thinking Edwards Hut might be an easier option. First stop was Twin Falls Stream waterfalls which Fay had scouted out the day before. Rain was forecast for the afternoon, but the morning was just blue sky and mountains as we headed on up to Walker Pass on to Tarn Col. I had read that a large scree slope was the best way down to Taruahuna Pass, but not wanting to waste time looking for it we followed the marked route straight over the edge and down the stream draining the tarn. Decision time – was it to be an easy stroll down the valley to Edwards Hut or up and over the mountains to Lake Mavis and Goat Pass Hut as planned? It was 11am, the skies were blue with no wind, a perfect day for getting up high, so up the mountain we climbed. After an hour's climb we stopped for lunch and looked down on Tarn Col with great satisfaction, 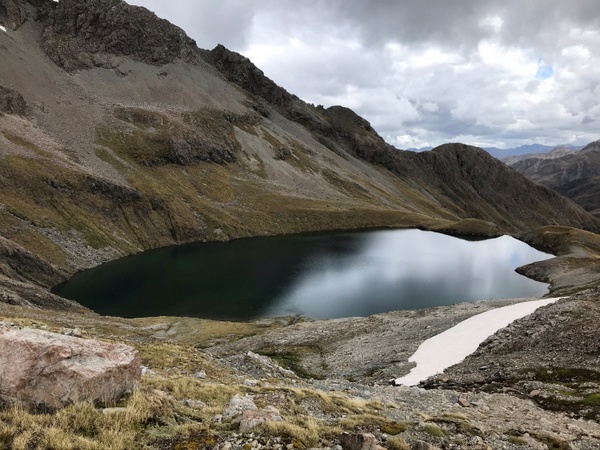 and across at the surrounding mountains and excitement for the climb ahead. Then things got harder as my planned route up the mountain ran into some bluffs, so an easier path was chosen which led to one cairn and then another cairn, so maybe this was the way. But no, we were heading the wrong way, so we angled back and kept climbing, eventually reaching the ice covered slopes just below the ridge line at 1800m. Fortunately the ice was soft and we were able to kick steps the rest of the way up. On reaching the top, we looked down the other side into Deception River valley. Lake Mavis was further south, so along the ridge line we travelled until Lake Mavis came into view. What a relief, as the clouds were beginning to surround us, it was good time to start our descent. Lake Mavis is one of the most beautiful alpine lakes I’ve seen and an idyllic camping spot given the right conditions, but with the weather forecast to deteriorate overnight we elected to continue on down to the Hut. We reached the hut at 5:05pm, not quite before the rain set in for the night and temperatures began to fall. 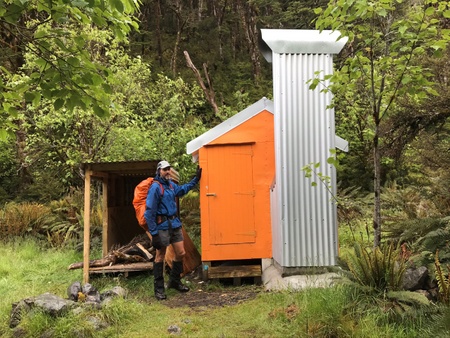 We woke to thick mist and a light rain, and feeling glad we had made the steep descent down from Lake Mavis yesterday. Goat Pass is mostly boardwalk before the track meets the Mingha River and begins its descent. We passed many a good waterfall on the way still flowing strongly from the night's rain. We passed Mingha Bivuoac which is a recently restored 2 bunker that looked very cozy with a small fire box. Goat Pass Hut is very popular with TA hikers but was cold with no fire place. Continuing down the Mingha and up and over Dudley Knob, the valley began to open up and State Highway 73 came into view. Arriving at Greyneys Shelter at 12 noon, we were picked up by Christine and Kathy and persuaded to drive to Hokitika - but that’s another story.