Day One began with a flight to Christchurch, a shuttle ride to Palmer Lodge, a swing bridge crossing of the Lewis River and the start of the Nina track. An easy 9km, 3.5 hour undulating walk saw us arrive at Nina Hut - perched high above the river amongst open beech trees that provided nice 270 degree views of our surroundings. The afternoon cup of tea drinkers amongst us had a spluttering surprise after squeezing the last few drops of water out of the tank, only to read that the tank had been emptied due to a dead rat. Spotting an enormously fat or pregnant mouse that soon succumbed to a very swift broom attack was also an early indication of the bountiful hungry vermin we had yet to encounter.

Day Two saw us sidling a stream steeply uphill for 2.5hrs and then following marker poles through waist high wet tussock towards

Devilskin Saddle. Another 100m climb led us to the new two man Devilskin Bivy. After being exposed to a wet windy climb we all happily squeezed and huddled in for an early cramped damp lunch. We then reluctantly left, following the marker poles that took us down towards the bush line again. Ahead of us was the long steady descent to the confluence of the Devilskin Stream and the Doubtful River.

An easy river crossing and then a sign indicating the old Doubtful Hut - in the opposite direction to our final destination, was more than Margaret could resist. We all lumbered off after her to fossick around a fairly basic dilapidated hut. Back on the trail again and heading towards the Doubtless Hut a little way up from the confluence of the Doubtful River and the Doubtless River - how confusing is all that!!!

Day Three The next morning and we were all greeted by little mice calling cards. 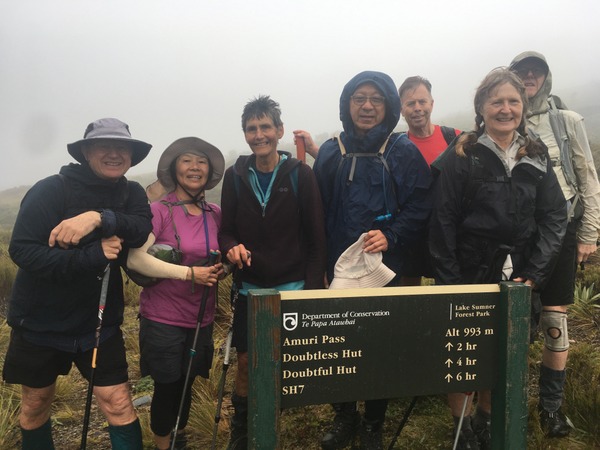 Numerous holes in tents, packs, pack liners, plastic bags etc etc. No tramper was spared. Oh what a gay time they had. In fact as each day passed the tell tale evidence of their presence morphed into the boldness of scurrying feet. Along with the rioting mobs of ferocious sandflies we felt Mother Nature was getting her comeback.

This day consisted of a small side trip past Phantom Flats and up to the Amuri Pass. This is a shared pass with horse trekkers, indicated by the little green triangles. We soon realized that some of our team must have thought they were of the four-legged variety, as trail confusion led us to losing them for a small time. Happily reunited by their neighing and braying, the walk proved to be a very pleasant day.

Day Four Due to Hazel’s reassuring favorable weather forecasting we gratefully left all those wild beasties behind and headed up towards the tops. Unfortunately for Michael and his injury, he was left behind to survive the wildlife onslaught alone. An 8.00 start had us eagerly back down the Doubtful River for half an hour and then a sharp right up the Kendon River led us through more beautiful beech forest for 2 hours towards the brightly orange painted Lake Man Biv.

It had been lovingly as well as tenderly restored, but the lure of the insect and rodent free tops convinced us to trudge

on for another hour or so and we set up camp on the tops by some beautiful tarns.

Margaret once again led us on a ‘stroll’ up a 1532m peak for stunning views all around and a fabulous glimpse of Lake Man - the weather was perfect. 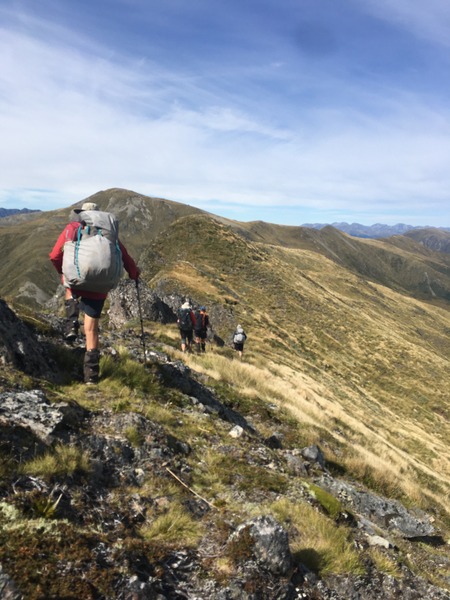 Day Five Another 8.00 start and straight up a big hill. The day became a succession of big ups (1693) and downs (1375 saddle) and up (Mt Murray 1611m) to end the solid day’s walking at another amazing campsite with many tarns and campsites to choose from.

Day Six That night the winds began to howl. After surviving a night of gale force winds and stormy weather we packed up camp and hastily headed on our merry way. We faced intermittent visibility, but fortunately the terrain was a wide undulating ridgeline. Tony’s only real instructions were “heads down and no stopping till we hit the bush line”

With Tony at the helm and Margaret and Chris plowing a path up and over Mt Garfield and east towards the tree line, the rest of the crew battened the hatches, used our poles as ballast and battled on.

The bush line provided welcome relief, lunch with a sunny view, and the rest of the day saw us joyfully zig and zagging a path to the Boyle River. A change of plans meant that we opted to head for a warm bed in Hamner ( thanks Hazel once again) rather than spend a sandfly infested night at the river's edge, even if it did also mean a rather wet 3 hour wait for the rescheduled shuttle.

Michael unfortunately came down the valley to meet us later than we had expected, but he managed to rejoin us later the following day in Christchurch.