Start from Lewis Pass, along St James Walkway, over Three Tarns Pass to East Matakitaki River, over Enid Pass to the Waiau Valley, Thompson Pass, D’Urville Pass, Pascoe Pass (by pt 1860) to Christopher River, climb Faerie Queene, down to Ada River and out.

Crampons and ice axes were originally deemed necessary but due to the mild climate only a couple of axes were taken.

Edwin from Hamner shuttles met us at Christchurch airport at 12.15 pm and it was just under two and a half hours drive to our start point at Lewis Pass.

After a two and a half hour walk up the St James Walkway, we arrived at Cannibal Gorge Hut at 5.15 pm. There were a few showers on the way. The only occupant in the hut was a German from the same part of East Germany as Uta.

Andrew had printed off a German copy of Die Partei (The Party is always right!) an East German patriotic song from 1949 early 1950’s, so we had genuine German voices singing the party song.

There were the usual mouse concerns with one in the trap in the morning.

The plan for the next day was to be up at 5.30 am and away by 7am. There was talk of doing 14-hour days in some quarters but that soon dissipated as the trip progressed.

We were away at 7am towards Ada Pass Hut and up over Three Tarns Pass. It had been decided to use the trip as an exercise in map and compass navigation with Alex leading off. David would supply check readings with the GPS if required.

We had lunch by the tarns at 1pm and headed down to camp by the Matakitaki River at 5pm.

We were up at 5.30am and away at 7am to travel along the Matakitaki River to Bobs Hut.

We worked our way through quite a few windfallen trees on the way. Michelle and Dennis were navigating. We reached the hut at 10.20 am and then it was along the track/route, over the three-wire bridge to arrive at East Matakitaki Hut at 3.15 pm.

Dennis and Andrew tented and the rest stayed in the hut.  Elapsed time 8.25 hours.

Away at 7am. With Dennis and Uta navigating we headed up a side branch of the Matakitaki River (unmarked territory) for Enid Pass, arriving at the top of the Pass at 1.30 pm.

After lunch we went down the scree on the other side. It looked like a long haul to go further to find suitable camping and water so we all camped at the bottom of the Pass, apart from Michelle who went up the hill a bit. It was 3pm when we set up camp.

A 7am start and Alex navigated. We headed around the east side of pt 1720 and along the tops in a southerly direction towards pt.1703 then down to the Waiau River. 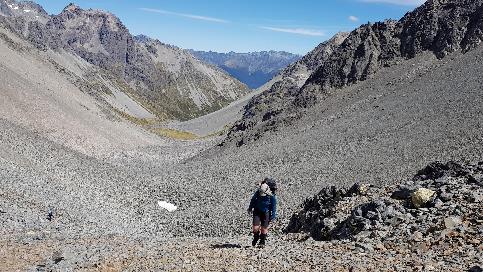 At this point we split up from Terry and Michelle who headed up river to the new Waiau Hut. The rest of us headed down river via the Waiau Pass Track to Christopher Hut.

Three of the party (Uta, Andrew, David) jumped in the river for a wash before arrival at the hut. This action was viewed at a significant distance by one or two ladies from a group already in the hut and comment was made that they had been put off their Backcountry Cuisine evening meal. (It wouldn’t take much!)

As there were about seven in this group, we all (except Alex) decided to camp. This group (mainly ladies) were doing the St James Walkway.

A couple of male trampers (well equipped with the necessary alcoholic supplies) arrived later in the afternoon. Apparently there was no snoring in the hut. Elapsed Time 10 hours. 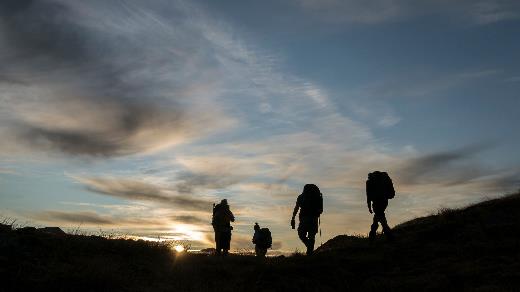 Up until now we had experienced fine weather but the report via Andrew’s inReach forecast rain for Friday, so we decided to stay put. The only exercise was a short wander to Christopher Cullers Hut.

Andrew, Dennis and Uta spent much of two days evolving future trip plans. Later in the day a group of 7 turned up (Hamilton Tramping Club which has 30 odd members) so all bar Alex reverted to tents for the night.

The other groups took off about 8 am so we repossessed the hut.

Terry and Michelle arrived 11 am. They had had the new Waiau Hut to themselves. They had met up with a group using llamas for transport, carrying the clients’ goods in panniers. On the way back down, they had popped in for a look at Lake Guyon.

We all sat around the hut for the rest of the day with more trip planning in vogue. Heavy rain fell during the night until 8 am the next morning. 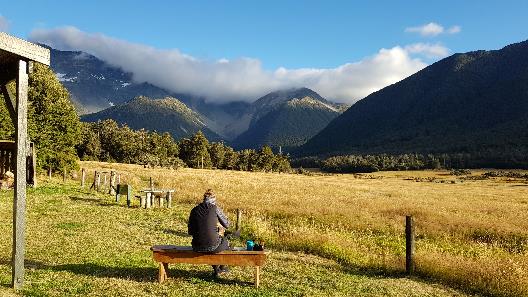 Four of us, Andrew, Dennis, Uta and David left the hut at 10am and headed up the creek adjacent to Christopher Cullers Hut through the bush and scrub towards points 1650, 1529.

The other three wandered off to Ada Pass Hut. 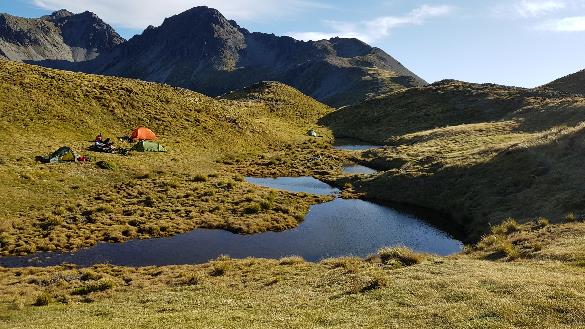 The four of us were away at 8am. It took 4 hours to get to pt 1681 where we had lunch and then headed down hill (along ridge tops) to Ada Pass Hut, arriving 3pm, to catch up with Alex, Terry and Michelle who had arrived the previous day.

Andrew, Dennis and Uta camped, the rest stayed in the hut. This was definitely sandfly country.

We left for Lewis Pass and our shuttle pick up point at 8am, arriving with an hour or so to spare. The shuttle was bang on time. 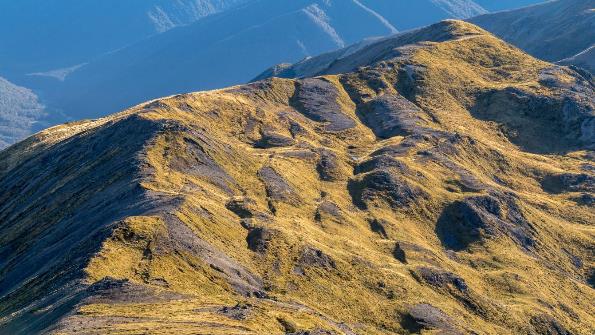